One of the things I (and many others) complain about is government ‘targets’.   I am concerned about economic and demographic targets but this applies to any target set by government (e.g. we will reduce surgery wait times by x).

I don’t have a problem with targets per se – in fact I believe governments should have a set of clear targets but what concerns me (and many others) is that many times government sets targets that seem to be totally unrealistic and then put almost no $$ or real effort to achieve those targets.  That’s the real problem.

Bernard Lord wanted New Brunswick to be among the top provinces in Canada for R&D but then only invested $25 million – a one time amount – into the new NBIF.  I said at the time that a quick calculation showed New Brunswick would need $100 million more per year in R&D spending (public and private) to hit the government’s target.   There was no realistic way that New Brunswick could have ever reached the Lord target.  We still rank last or 9th among the provinces in Canada for R&D spending – depending on the metric you are using.

Then there was Shawn Graham and his self-sufficiency agenda – easily the most ambitious plan ever – as it called for the elimination of federal equalization cash by 2026.  As was pointed out at the time by myself (and others) we would have needed to likely triple the size of the economy in 20 years to kill equalization or we would have needed a massive new high value/high royalty industry like oil and gas – not just a little – but an offshore NL sized industry – to eliminate our need for equalization.

Since 2006, federal equalization flowing to GNB has increased from $1.4 billion to $2 billion (in the 2020 budget) but, as a share of total provincial revenue it has dropped from 24.3% to $21.4%.  At this rate we will be off equalization by sometime in the middle of next century (assuming the trend holds) and Graham’s great, great, great grand niece will be Premier and take the credit.

But there is one Graham target that could be actually within reach.  The self-sufficiency agenda called for the population of New Brunswick to rise by 100,000 by 2026 (within 20 years).  At the time there was a lot of skepticism about this target too because we had just been through 15 straight years with almost no population growth (estimated at 745,600 in 1991 and 745,600 in 2006) and it had taken from 1972 to 2006 to growth the New Brunswick population by 100,000 previously and that was with a significant natural population growth rate (more births than deaths).

So most people discounted this target and it sits -along with the rest of the self-sufficiency agenda – gathering dust on the shelf at the New Brunswick Legislative Library.

Of course I’m sure it was just consequential, er, I meant to say coincidental – that I became Chief Economist with the Jobs Board Secretariat in 2015.

The point is that the self-sufficiency agenda target of net growth in the population by 100,000 by 2026 is now within reasonable sight.  It would take a more than doubling of the ‘Campbell’ growth rate of 0.6% to 1.35% or an annual average of just under 11,000 per year in population growth but I think this is not only possible it is needed to bolster the labour market and GDP growth targets.

I think we can hit this one but it will take getting immigration up to at least 10,000 per year in the very near future and growing from there (we were at 6,000 in pre-Covid 2019). 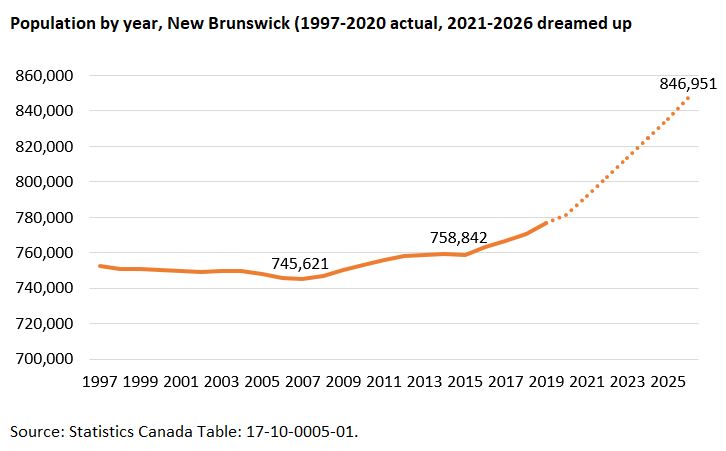