A few years ago I was asked to a meet with a client in downtown Toronto.  The meeting took place at 9 am.  I left on the 5:30 am flight from Moncton, arrived at the airport in Mississauga at 6:30 am, jumped on the train and was having breakfast at a coffee shop one block from my 9 am meeting by 7:30 am in downtown Toronto. When the meeting started one of the other participants grumbled about his 90 minute commute and suggested I had an easier time of it than him.

This kind of story gets repeated a lot.  For people who travel a lot to Toronto or Montreal, they argue in many ways it is easier to get to a meeting in Toronto from Moncton or Saint John than from the periphery of the GTA itself.

That may be an exaggeration but it points to the very real importance of airports and air transportation.

Now as the provincial government embarks on a strategy to attract more remote workers even as it looks to significantly increase the annual intake of immigrants, the importance of our airports becomes even more pronounced.

And, as Dr. Herb Emery points out, this is even more important as high speed rail rolls out across southern Ontario.  Right now you could argue that depending on the time of day it is as easy to commute into Toronto from Fredericton as it is from Waterloo (in terms of time, not $$).  After high speed rail is deployed remote workers in the greater greater Toronto Area will have a distinct advantage.  Imagine if in New Brunswick we add another hour or two to the commute to Toronto on the front end?

Getting back to at least where we were before the pandemic in terms of flights, competition and ticket prices should be a goal of the provincial government’s transportation strategy (and the federal government). Ideally things would even be better but it is unlikely we will ever get direct access to a U.S. hub airport because of Osama Bin Laden (and the resultant pre-clearance at Canadian airports).

You may look at the chart below and think “good, we don’t travel that means more money spent at home”.  I look at it and think it is a sign of our insularity.  Spending the least among the 10 provinces on air travel and 55% below average for the country overall is not success – it is, in many ways, failure.

Do you think closing airports and scaling back service will either a) help or b) hurt this situation? 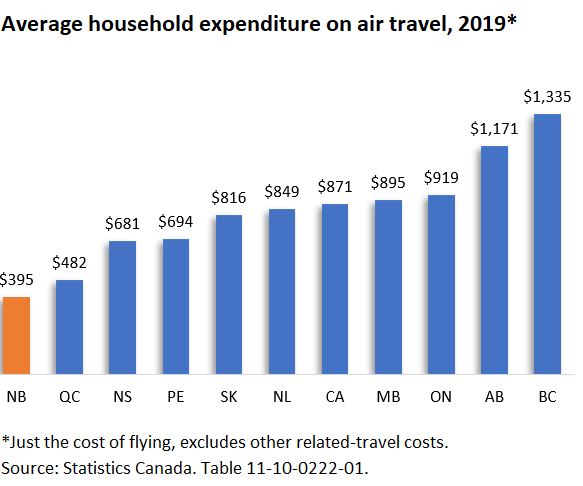 Let’s put air transportation on the long list of important public policy issues facing the province and country in 2021.