Setting aside what the word ‘rated’ means, Halifax actually ranks sixth among Nova Scotia municipalities for population growth between July 2019 and June 2020.  The fastest growing was the Shelburne Municipal District followed by Port Hawkesbury which saw its population rocket ahead by 2.6% in one year. 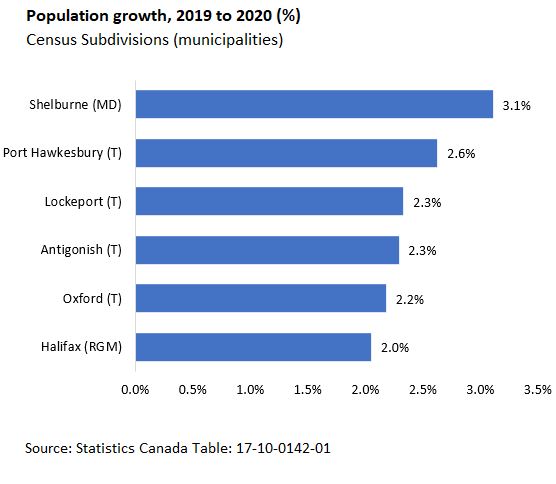 The Halifax CMA is the second fastest growing among the country’s 35 Census Metropolitan Areas – which is a huge feat.

Again this is not to diminish what is happening in Halifax.  It is a shining example of how an Atlantic Canadian city can thrive.  It’s universities are mostly rocking.  The startup scene is very strong.  It’s role as a regional services hub is strengthening.

But we need to a) use the right terms when telling these stories (municipality versus urban area versus economic region, etc.); and b) we need to ensure the readers understand the full context when embarking on the broader thrust of the article.

2 thoughts on “Sorry, Halifax is not Canada’s 2nd fastest growing municipality. It’s not even 2nd fastest in NS.”