Of the (limited) negative comments I get to my writing on this blog, probably the top theme is a condemnation of my obsession with economic growth.  Even when I was Chief Economist in government, I would have colleagues questioning why New Brunswick (and Canada) needs to slavishly focus on economic growth.  Why not put more focus on inclusive growth (fairness) or sustainable growth?

As I have always maintained, it depends on what we want as a society.

Here in New Brunswick we have not grown the economy by much over the past 13 years and now the provincial government debt has doubled, the share of GDP accounted for by the public sector has risen 2.5 times faster than the private sector (2008-2019) and we have way more people working for the public sector or collecting public pension income than we did a decade or so ago.

In other words, we have had growth – just growth in publicly-funded economic activity and the concern, among many, is that this is not sustainable (albeit not the sustainability envisioned in the title) in the long term.

So, in New Brunswick, the question we should be asking is: do we want economic growth at all?  We may not have the luxury of asking  about inclusive or sustainable growth.  Although, cynics would say that by relying far more on the public sector and on government transfer income it would seem to be more inclusive and by dumping a lot of our ‘dirty’ GDP in recent years (mining, smelter, forest products mills, etc.) our environmental footprint has declined.

And, in the past three years, the average net worth of the two highest family net income cohorts in New Brunswick has declined sharply compared to modest growth for families across Canada. 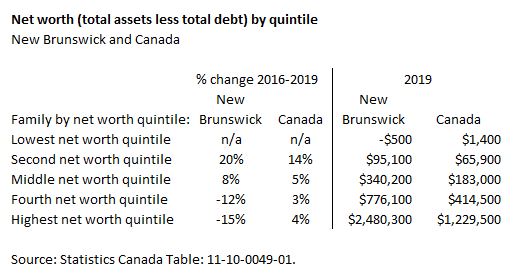 So the inclusive and sustainable growth folks in New Brunswick should be feeling pretty good right now. The rich have less income, the public sector is much larger and we are polluting a lot less.  The flipside is among North America’s highest tax burdens, the doubling of public debt in just over a decade and the sustainability of high quality public services is becoming increasingly questionable. 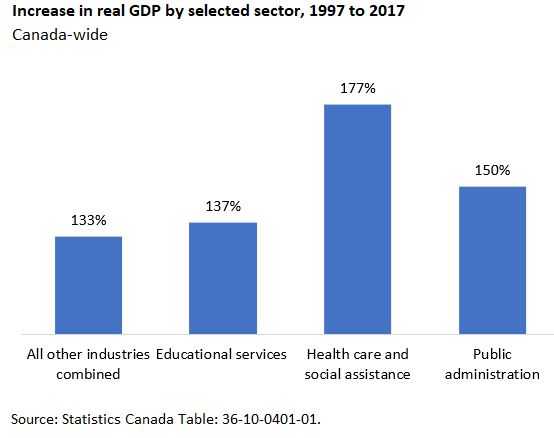 And the amount of total personal income from government transfers has increased 43% faster than employment income between 2000 and 2018.  Remember this is Canada, not New Brunswick.  You can laud the massive push into tax credits to support families at lower income cohorts (I do).  You can puff out your chest and laud the fact that pension and government support for the elderly has risen well above employment income – after all it should – as the number of oldies outpaces the number of workforce aged population.

BTW, the ‘private pensions’ figure here is a bit of a misnomer as a large share of this is public sector employee pensions. 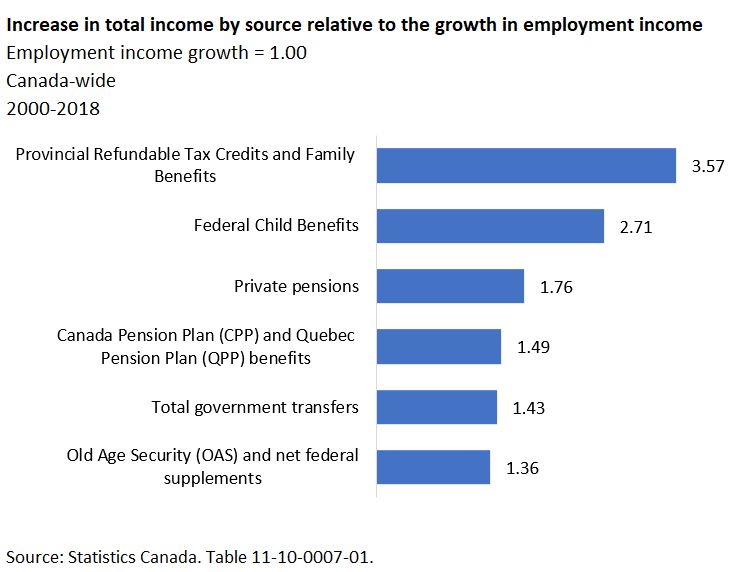 Forget about New Brunswick for a minute, explain to me how Canada could survive 15-20 years of New Brunswick-level economic growth?

So this brings me back to my original thesis.  There may be countries and jurisdictions around the world that are strong enough to handle zero growth or shrinking economies and still provided high quality public services, government transfers and public infrastructure.

I’m not sure Canada is one of them and I am really sure New Brunswick is not.

1 thought on “Should we be striving for inclusive and sustainable economic growth?”