Anyway here is the detailed data for NB urban centres.  The Moncton CMA added 2,850 to its population in 2020 (July 2019 to June 2020) down from 3,310 the year before – likely a Covid-19 impact but we don’t know yet.  Still that was enough to make the Moncton CMA 7th out of 35 CMAs for population growth – second only to Halifax east of Oshawa.  Fredericton had a strong population growth and Saint John added population again  – now up 3,500 from its low in 2015.  We still need to see more growth in Saint John. 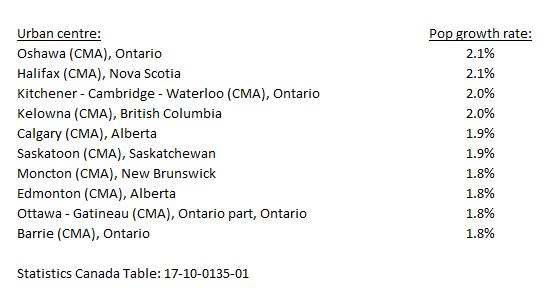 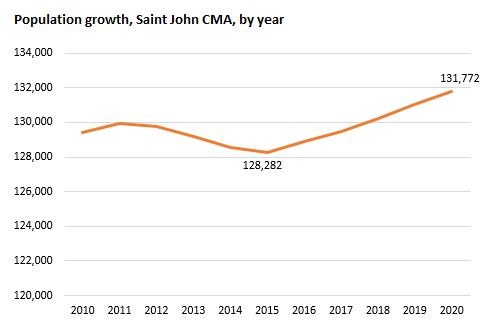 The Moncton CMA had another record year for immigration – up slightly from 1,694 last year.  That is very likely a Covid-19 impact as we have PR data from IRCC showing a steep decline after March 2020.  Moncton was likely on the way to 2,000ish PRs in 2020 until the pandemic hit.  Fredericton was down 350 immigrants in 2020 but again that is likely mostly a pandemic impact.  Saint John had essentially the same immigrant numbers in 2020 as 2019.  Interesting to see the strong growth in immigrants settling outside the CMAs/CAs – up 300 in just two years.

Fredericton leads the way in net intraprovincial migration with a rate of 32.7 per 10,000 population – all other urban centres and the non-CMA/CA areas are leaking population into Moncton and Fredericton.

Fredericton continues to have a fairly bad net interprovincial migration rate.  While Moncton attracted a net 352 from other provinces, Fredericton lost a net 422 to other provinces.  This is bottom quartile among the 160+ CMAs/CAs across the country but there is a trend.  Many smaller urban centres with well above average immigration rates the past few years saw significant negative interprovincial migration (see the table below).  It could be these small urban centres are having a harder to retain immigrants. 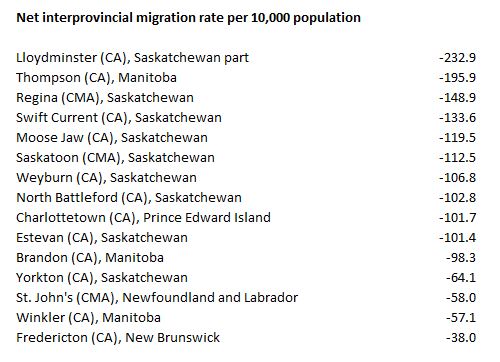