One way would be to use the population growth figures from the Labour Force Survey.  They are only for the population 15 and older and are based on a fairly small sample size but they tend to be correlated pretty strongly with the actual population trends over time.

Using December 2019 to December 2020 figures from the LFS (unadjusted), Halifax’s 15+ population increased by 2.1% (similar to the number out last week) and Moncton increased by 1.7% again similar to the figure last week.  Saint John’s population 15+ growth using the LFS was 0.8% – but this is trending solidly in the right direction.  This specific table is for CMAs so Fredericton, et. al. is not included.

Based on this it looks like at least the CMA population growth figures held up through the pandemic.  These could be underestimates as well if all the UHaul and house buying sight unseen that we read about in the media are pointing towards significant inward interprovincial migration. 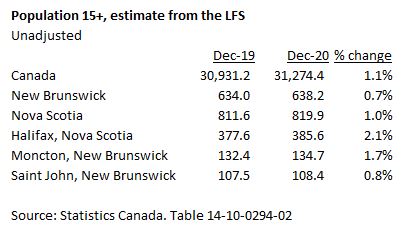 We can use the monthly IRCC data on permanent residents to estimate immigrant settlement.  You can see from the attached table that everyone is down sharply (Moncton’s numbers are down the least but still down by 40% year-over-year).  It’s important to realize that some of this is due to the slowing down of PR application processing.  In fact many people here on work or other permits are waiting to get their PR – so they are actually here just not showing up in the PR numbers they way they would have last year at this time.

I think it is fair to say though that for the calendar year, immigration numbers will be down sharply in 2020 but should rebound strongly in 2021. 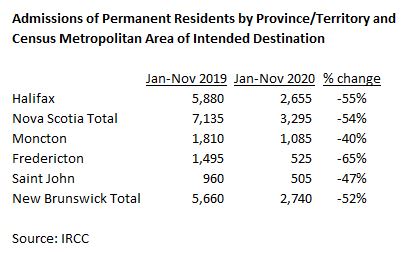