One of the things that I get the most push back on is my view of rural economic development.  There are those – many close colleagues – who believe that what New Brunswick needs is for all (or most) services to be consolidated in cities (or at least big towns) and that if people want to live in smaller towns and rural areas they will need to commute into the cities to access these services.

I, on the other hand, have always felt if there was a legitimate market demand for services in smaller areas, why wouldn’t we encourage entrepreneurs to address that demand?

But, again, I feel that if you empty out smaller towns and rural areas – particularly given they are mostly within the orbit of an urban centre anyway – government will still incur the costs of providing public services and infrastructure to a dwindling population base.  Have you ever been to Elgin?  Beautiful tiny community an hour or so from Moncton.  A couple of hundred people.  Still needs ambulance services, police services, snow removal services, electric power services and, increasingly the demand for high speed Internet services.  So you either shut it down completely like Newfoundland’s outports or maybe we take a different route.

This is why I welcomed hearing that a dentist is looking to set up a practice in Blackville – to service a population base of a few thousand people from, say, Renous to Blissfield.  The easy thing to do would be to set up in a city (Fredericton or Miramichi) and just assume the folks will drive to the service provider.  An ambitious entrepreneur would make their mark by going to the customers.  Rural economic development should be about determining what legitimate market opportunities exist to be exploited in the small community or rural area from dentists to mineral mining to ecotourism.  The problem, as I have detailed elsewhere, is that we don’t really have the capacity to do this kind of economic development in much of rural New Brunswick.

It gets a little more tricky with public services but the theory remains intact.  If there is enough demand for a public service (a Service NB office or a health clinic or a salt shed, etc.) in a town or rural area, then the same thing should apply.  Don’t just opt for some consolidated service because it is more convenient. Now, if it is sufficiently cheaper and better to consolidate public services enough to justify making the clients drive a lot longer to access the service then do so.

I was just looking at the new data from Statistic’s Canada on municipally owned culture, recreation and sport facilities in Canada and as you can see from the charts below, rural New Brunswick has far more culture, recreation and sports infrastructure – adjusted for population size – than the country overall.  We have nearly three times as many indoor gyms (municipally owned), 2.9 times as many tennis courts, 2.3 times as many ice arenas, etc. (great to see the walking and biking trails data – this we should promote heavily).

So the data itself does not lend itself to easy solutions. The Statistics Canada report doesn’t speak to the quality of the infrastructure nor to the demand for it.  In general, however, it does point to potential benefits from better municipal collaboration or regional governance.  Again, come back to the dentist example.  Every little community would like a dentist but if the market in ‘Upper’ Blackville cannot support one – having one in Blackville is better than one 45 minutes or more away. 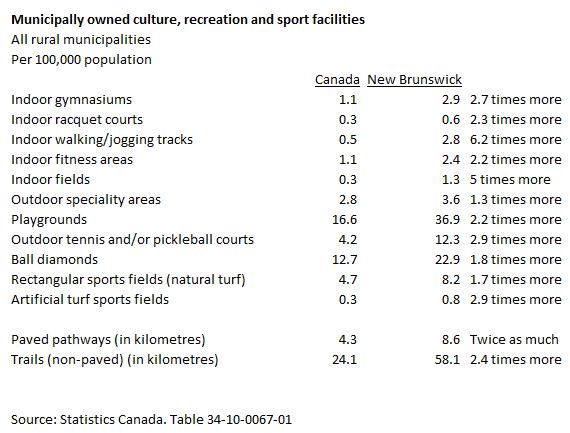 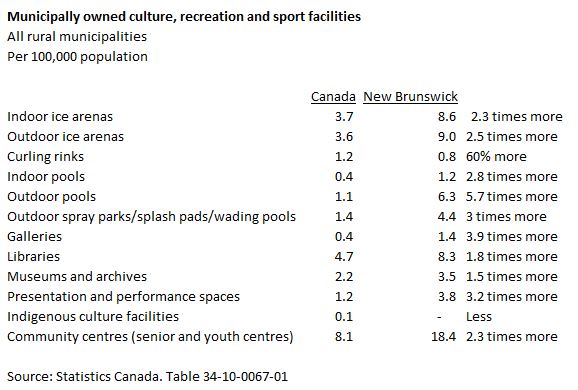 In the end I would like to see a ‘market-based’ approach to services – public and private. This would hopefully support better economic development around the province and reinforce the need for population growth across New Brunswick.

2 thoughts on “Welcoming a new dentist to Blackville”