A few years ago the top five research universities in Canada got together and proposed that the country should concentrate all serious high education research activities in those five. We were told it would help us compete with global universities for research dollars and talent.   Of course it didn’t go very far as a formal proposal although based on the most recent report from Research Infosource Inc. you might be forgiven if you see a pattern.

The top four universities received 35% of the incremental sponsored research dollars between 2009 and 2019.  If you add in Calgary, Laval and Ottawa those 7 universities accounted for 60% of all the growth in research spending in the top 50 – or should I say the top 47.  I excluded Acadia, Ontario Tech and the Université du Québec en Outaouais because they either weren’t on the list in 2009  or there was a change.

I know both UNB and UdeM have big plans to grow research activities in the coming years but how do we ensure that by 2029 we haven’t just basically flatlined as a province?  I love the new UNB SJ initiative around health system research (see the recent Growing Pains podcast on this).

Then there is Memorial.  The Rock is known for its offshore oil and quite a bit of fish but how about more than doubling sponsored research from $72M in 2009 (in the ballpark of UNB) to $161 million in 2019 (in a different ballpark).  In fact, Memorial has roared past Dalhousie (collective inhaling of breath) which had $151M in sponsored research in 2019.

A bit of a surprise – UPEI – actually has seen a decline from $16M to $11M over the decade.  Given the growth in population, GDP, etc. that there would have been more focus on higher education research.

This is not time for an esoteric debate.

Our universities and colleges are going to be critical in the next 5-10 years.  We have to restock our labour market and the talent pipeline to address the wave of boomer retirements.  We have to substantially boost our innovation capacity to be able to compete in our traded sectors.  We need a big fat cohort of new ambitious entrepreneurs looking to take on the world and our universities can be talent incubators and IP factories.

We are facing massive industry disruption – our energy sector will transform – automation and AI are coming – the move towards populism and nativism around the world could really hurt small, export-dependent places like New Brunswick.  We need our biggest brains on the job and, to be frank, our PhDs are clustered in the education sector. The following table shows the number of persons with earned doctorate degrees (excluding those with doctorate degrees in medicine, dentistry, veterinary medicine or optometry) per 100,000 population.  New Brunswick ranks last in Canada by a fairly wide margin (we need over 400 more PhDs just to catch PEI). And we have the second highest concentration of all PhDs in the education sector. Only the Rock has more of its PhDs in the education sector.  So we have few of them and the bulk are in our universities.

If you want to find the biggest brains, just chase the ivy. 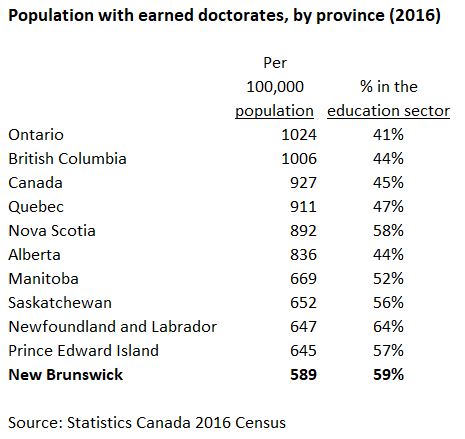 I guess what I am saying in the end is if you want Granny to be able to have a comfortable life and get good health care over the next 20 years, you should be worried about the lack of university research in New Brunswick.

2 thoughts on “Higher education research: There is no time for navel gazing. We need a lot more.”