Daryl Branscombe started a group a couple of years ago called the Coalition of Concerned Citizens.  It is made up mostly of wizened New Brunswickers who formerly held senior roles in government, community and industry.

I admire what they are trying to do.  Collectively they probably have more than a thousand years’ experience.

I have said in the past and continue to believe that older New Brunswickers are key to any future economic renaissance.  If they don’t want immigration – it will slam the door on any attempts to grow the population.  If they don’t want new natural resources development – it won’t happen.  If they want an increasing share of public spending to be directed towards health care at the expense of investments in education, etc. there is a strong likelihood this will happen.  If they are okay with governments running up huge deficits building up the burden on future generations, this is likely to continue.  It’s not a criticism per se, just that we live in a democracy and if the largest voting block holds certain views – views that are more aligned with their age and stage in life – that is likely what will be reflected back in political outcomes.

At the risk of sounding a little condescending, I would like to challenge older New Brunswickers a bit. I think I can get away with it at least a bit because I have fewer years ahead of me than behind.  In 2021, I am entering the 28th year of my post-MBA graduation career.  I work with young folks on a weekly basis that are the age of my eldest daughter. In other words, I’m no spring chicken myself.

As I told Daryl recently, the economic prosperity and quality of life of the average New Brusnwickers made significant gains over the period of his and his peer’s careers.   The life expectancy of the average New Brunswicker rose from the early 70s in the 1960s and 1970s to 82+ years today.  The per capita GDP and income gap narrowed significantly.  Between the 1950s and 2016 the per capita household income gap shrunk by two thirds.  Structural unemployment has collapsed (i.e. non-seasonal unemployment) in the past 30-40 years.  The share of the population below the poverty line is lower.  The quality of public infrastructure has massively improved – hospitals, roads, airports, etc. We have more kms of four-lane highway than any other province adjusted for population size. 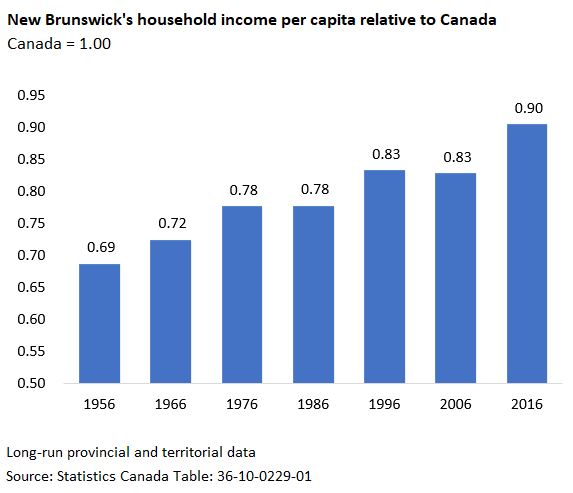 But after a lost decade of economic growth, a domestic population and workforce in outright decline and an entrepreneurial class where over 40% are pushing retirement, we risk giving back a lot of the gains made over the past 50 years or so.

This was my message to Daryl and the Travelling Wilburys (I realize the TWs have become a metaphor for older musicians getting together late in life – they were actually in their 40s and 50s at the time) was we should all be focused on ensuring those gains don’t fritter away over the next 20-30 years. 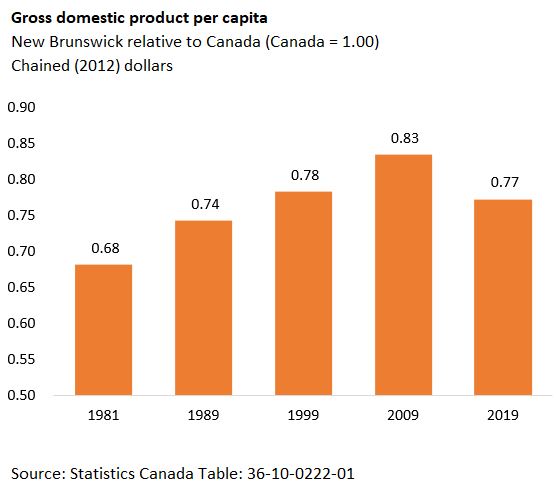 Now others – namely Richard Saillant and Herb Emery – remind me that much of the ‘gains’ over the past 50 years are due to the expansion of federal transfer payments – Equalization and payments to individuals – Employment Insurance (which provided $900 million to NBers in 2018).  That is true.  Look at the following chart. In rural New Brunswick, almost one out of every four dollars in total personal income reported on tax forms was from the government* compared to only 4% in Fort McMurray/Wood Buffalo.

To put this another way, for every dollar of employment income earned in rural New Brunswick in 2018, there was 39 cents of government transfer income. 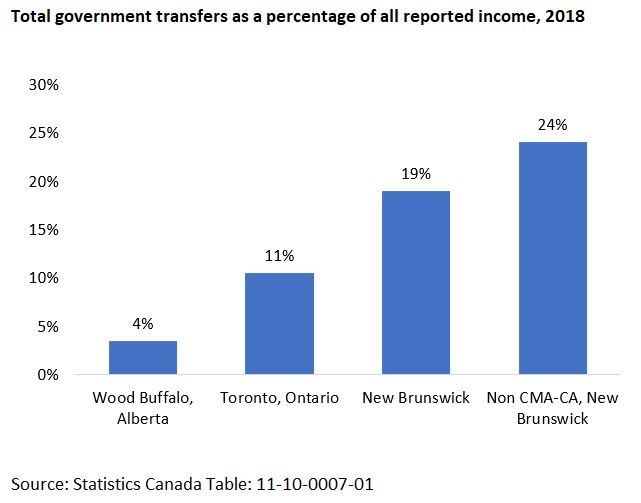 But it’s not the whole story.  A number of new export-focused industries emerged.  Private sector investment expanded through much of the 1960s-early 2000s.

Plus, even if that is true -all the more reason to get the Golden Girls and Boys together with the dewy-eyed dragon slayers to come up with a growth plan for the future.

Someone’s gotta do if.  If the retirees want to retrench and play shuffleboard and golf and if the young ‘uns just shrug and move to Toronto, who’s left to work on this place in this time?