A former colleague of mine known for his flashy shirts recently asked me to comment on the potential of a steep personal income tax (he recommended zero) to entice mobile professional workers to move here.  Would, he asked, the increase in other taxes make up for the lost income tax revenue?

In the 2019-20 budget year, GNB forecasted $1.8 billion in revenue from personal income tax and $1.6 billion from HST revenue.  What if GNB eliminated all PIT and it attracted a wave of mobile professionals.  What would happen?

In practical terms it would require a wave of professionals to move here.  Not only do you need to replace the lost $1.8 billion in PIT you need to boost spending on services to support that wave of professionals.  Granted that group tends to need less public services in general but they do have children in schools, require health care services, as well as using public roads and infrastructure.

A very rough estimate would be that the province would have to attract a lot of mobile professionals.  The effective GNB HST rate on personal income in New Brunswick is a little less than 6%.  In 2018, New Brunswickers claimed a total of $25.7 billion in income on their tax forms (from all source).  To generate at least the $1.8 billion in PIT from HST without raising the HST rate, would require the total income in the province to more than double over night.   $30 billion taxed at 6% = $1.8 billion but remember we would need more income to cover the cost of public services for the tens of thousands who would move here.  There would be other taxes induced – fuel taxes, corporate income taxes, etc. but it is clear it would take a massive boost in income.

How much is $30 billion?  It’s not a simple calculus but it equates to 200,000 people earing $150,000 per year.  In other words, you would need to attract the equivalent of everyone earning $150,000 or more in British Columbia, Saskatchewan, Manitoba, Nova Scotia, Newfoundland and Labrador and Prince Edward Island combined. 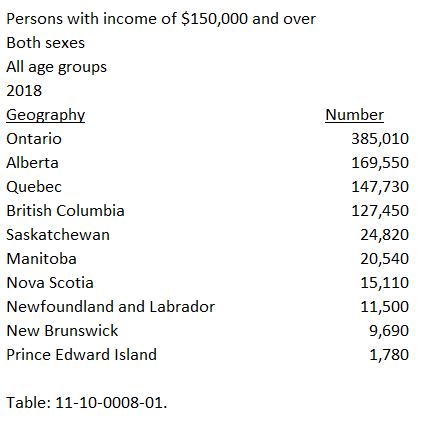 You can see the practical problems with the concept. There would likely not be 200,000 truly mobile professionals at $150,000/year in all of Canada.  You could certainly attract international people too but I think the scale of what would be required is colossal.

What would likely happen is the province would attract 10,000 or maybe even 20,000 higher income professionals but that wouldn’t even come close to offsetting the lost tax revenue.

We know from the U.S. example that zero state PIT rates are not uniformly associated with economic growth.  The states with no income tax are Alaska, Florida, Nevada, South Dakota, Texas, Washington, and Wyoming. New Hampshire or Tennessee don’t tax income but do tax investment earnings.  People are not flocking to Alaska and most of the growth in the other places is primarily due to other factors.

That brings me to the political considerations.

There is zero chance Ontario, Alberta, et. al. would allow New Brunswick to cut its PIT rate to zero.  It can be done in the United States because of how things are structured there but it couldn’t be done here. There are no more words to be written on this.  Zero.

What about variations on the theme?

Eliminate personal income taxes on just those moving into the province – This has been proposed several times in my lifetime by certain politicians but it goes nowhere because those here already would be severely angered and they make up a much larger share of voters.  I know it is done in other jurisdictions but NBers seem to be more sensitive to ‘fairness’ than most.

Eliminate personal income taxes on just specific industries or occupations – again, has been proposed – for example on IT workers – but other industries would be pissed (see note on fairness above).

Just reduce the PIT rate on higher income professionals – say those earning $100k or higher – The top 1% of income earners in New Brunswick pay more income tax than the bottom 50%.  So you would have to attract likely tens of thousands to offset the lost revenue, which would problematic – and everyone making $50k or $75k would be pissed they are paying income tax when you are not (you as in high income earners).

Eliminate personal income taxes for a period of time – say 5 years – on those moving in to help cover their moving costs and induce them to settle here – this idea is slightly more possible – it would be similar to the grants certain jurisdictions are giving out to attract people. Would it be enough to keep them after the 5 years?  Maybe.  It is likely worth studying further.

Eliminate PIT but raise HST to compensate – in other words – add another 10 percentage points to the HST (bringing it to 25%), cut PIT to zero and hold on for dear life.  This concept would have to be a) better modelled and b) focus tested with the public and potential movers.  Further, there would need to be a sophisticated system for HST rebates developed to align it with the income tax distribution shown in the graphic below.  Few people would propose to put more tax on folks at the lower end of the income distribution. In addition, it is unclear how much of incremental income would be subject to HST.  If ‘richer’ people are saving more or travelling more or spending more outside the province, or just no spending the same share on HST eligible purchases, it would have to be properly modelled.

And I still think if the goal was to woo rich professionals out of Ontario that would be a non-starter.  I already had an Ontario colleague grumbling when he heard that Moncton is attracting more people these days from Toronto than vice versa.

One of the complications of being on the Equalization hind teat is that New Brunswick really doesn’t have a lot of say on its tax policy – on the margin yes – but any big changes would wake the beast.

So, on the whole, I think aggressively reduce taxes to woo people here is unlikely to be practical or politically feasible. 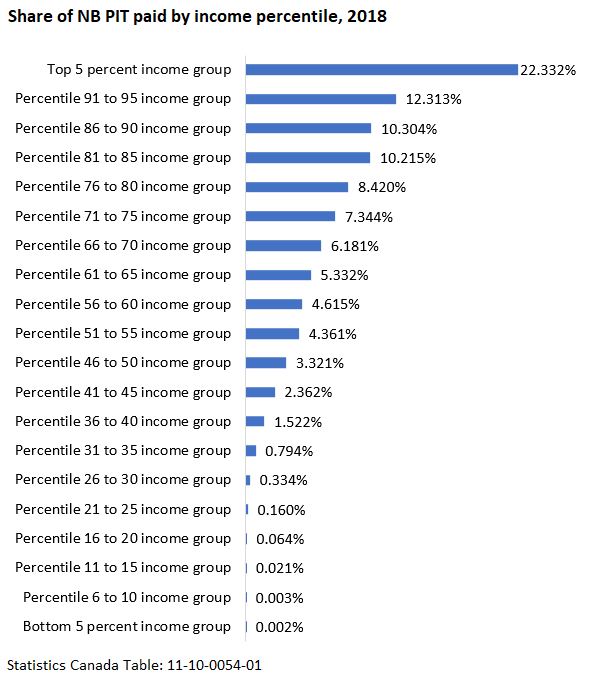