If you think about it much, it was only a matter of time.

Meanwhile places like Moncton were elbowing their way into the game.  In the early 2000s Moncton was attracting a couple hundred immigrants per year.  In 2019, over 1,700 immigrants settled in the Moncton CMA.  And this trend was playing out in smaller urban centres across the country from Charlottetown to Kelowna. 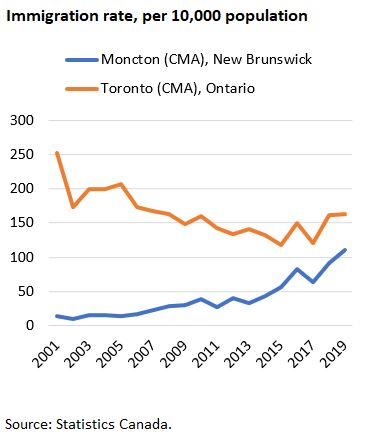 To make matters worse for Hogtown, the urban centre was having a harder time relying on people to move in from places like Moncton.  In 2018, more people moved to Moncton from Toronto than vice versa.

So, either directly or indirectly, Toronto cracked the whip.  What Toronto wants, Toronto gets.

This is likely the main reason why the Canada government announced it would be increasing annual immigrant levels over the next three years.  The smaller urban centres want in.  The big ones want to continue to grow.  They are all facing older populations and far more people retiring each year than in the past.

Oh, and by the way, that cute trick of relying more on non-permanent residents is not the solution.  In the past three years, the number in Toronto has skyrocketed (and country-wide).  It’s not like the city has added a whole bunch of greenhouses needing TFW agricultural workers.  Don’t use temporary workers to artificially boost the annual cap.  If you need more, boost the cap. 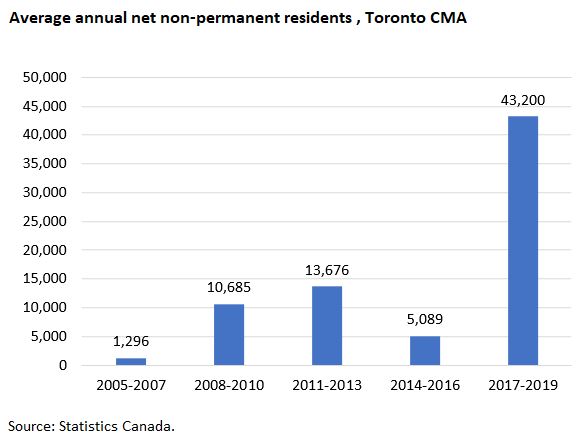 As I have said many times before, immigration levels need to be set as an aggregate of provincial targets.  Almost all provinces want more immigrants ergo the annual national number should increase.

Of course Covid-19 has thrown a wrench in the gears but I think most provincial governments realize the longer term demographic trends and will push to ensure they can have the workforce needed to grow their economies.

There is always going to be interprovincial mobility of immigrants (and non-immigrants).  To use the currently en vogue cliché,  this is a feature not a bug.  We want to live in a country where people can move to take advantage of opportunity. Don’t make this a reason to restrict immigration into specific provinces.  Work harder to target those coming in to ensure they have a good local economic opportunity (i.e. aligned with the job experience and skills) and have a ‘fit’ with the city or town they are moving into  I think we can and must do a better job with targeting.

In the end, immigration is controlled by the federal government.  More than any time in the past (at least the recent past) the feds control the main lever of economic growth at the provincial level.  They would be wise to scooch over and let the province’s help steer the plane.  It might get a little crowded in the cockpit but it will be best for the country.