I have a theory about cities, towns and villages and their mayors.  In my experience, if a mayor is in more than one term the city, town or village starts to look and feel like the mayor.  If the mayor is bold and brash, the city will get that reputation.  If the mayor is understated but determined – so will the city brand.  If the mayor is, well, Trumpish, so over time will be the brand of the city.

Try it with your mayor, if you have one.

It makes some sense as the mayor is the face of the city – constantly in the media – the spokesperson for the good, bad and ugly.  And now with social media their presence is only amplified.

However, around 30-35% of New Brunswickers don’t have a mayor.  They have no real local government at all.

I have been writing for years that every New Brunswicker deserves a mayor (whether they know it or not).  Effective and accountable local government should be part of our democracy – hopefully with at least enough scale to properly plan, fund economic development, invest in infrastructure, etc.

The three levels of government in Canada have distinct and important functions (I know, I know, you wonks will tell me there really isn’t a ‘local government’ as it is a creature of the provincial government and can only pass by-laws and not ‘real’ laws – but I am talking about the role and not the legislated structure).

Local government is needed.  It is closest to the people.  It is the only level of government uniquely and specifically interested in what goes on in local communities.  This is not to say provincial and federal governments don’t care about what goes on locally but they have by definition broader interests.  In other words, a province could be widely successful in economic, population and quality of life terms but dozens of individual communities could be really struggling.

Having a local government doesn’t guarantee success, of course. But not having one, I believe, over time can lead to atrophy and I think that is happening in much of New Brunswick.

When we have potential rural development projects in LSDs, who is the local government champion?  Who is advocating for the tens of thousands of people living around the province in these areas?  I know there are advisory groups and regional services commissions but I stand by my conviction that everyone needs an elected and accountable mayor (and council).

So why doesn’t New Brunswick just make it so?

Because the people living in the LSDs – at least we believe – overwhelmingly don’t want it.  They want to be left alone on their plot of land far enough outside of urbanity to give them peace and quiet and a property tax rate far below what most of their fellow citizens pay.

Just about everyone that moves to a city in New Brunswick from outside the province instantly complains about property taxes.  It doesn’t matter if they came from Alberta, Ontario or British Columbia, they will complain of their property tax bill being much higher here than where they lived before.  I ask them you mean the property tax rate?  Surely when you consider the lower assessed value of your property the overall taxes paid must be lower.  No.  They insist that even with a lower valued home their property tax bill is much higher. 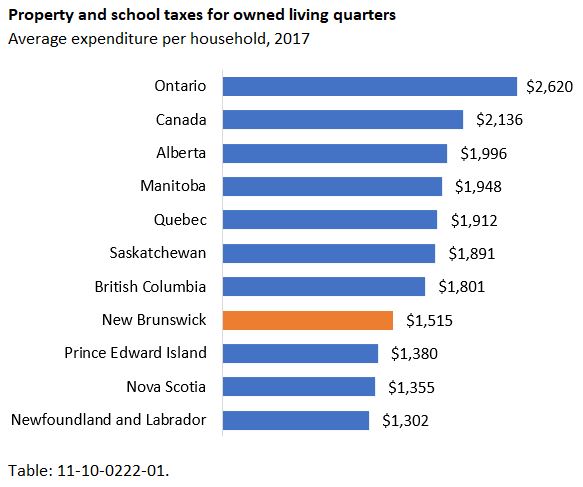 I’m going to let you run out and look at your property tax bill. My suspicion is that if you live in any kind of municipality with a mayor and council, your tax bill is likely higher than the average shown in the chart above.

So, of course, the conversation about LSDs, municipalization, who merges with whom, etc. almost always comes down to property taxes.

There is something about property tax.  That tax seems to bug people more than any other even though the average household will pay far more in personal income tax and sales tax than they do in property tax each year.  I have speculated in the past that cities don’t do a good enough job of explaining to people where the thousands in taxes paid each year gets spent.  I think people have a better understanding of what their income and sales taxes funds – health care, education, roads, etc.

Moncton and other municipalities now develop a booklet every year that clearly lays out where the spending goes – police, fire, snow removal, garbage removal, public parks/spaces, etc.  and this has been a good step.

A few years ago the government raised the provincial portion of the HST by two percentage points – or 25% in one swoop – which costs the average 2+ person household something like $800/year – and there was surprisingly little pushback.  I guess people realized the 15% HST was already in place in Nova Scotia and believed the increase in NB was inevitable.

But my point is that a couple hundred dollar rise in property taxes – is considered by many to be an outrage.

I think the conversation needs to be elevated beyond just property taxes – although there does need to be fairness in taxation.

The everyone needs a mayor conversation is more about the quality of life and sustainability in the longer run.  It’s about planning.  It’s about economic development.  It’s about advocacy.

As I have said before I think municipalities need to be even more engaged in their destiny.  In a small province like New Brunswick it is easy to punt responsibility to Fredericton but I think that’s a cop out.  If you have fallow farmland in and around your municipality – don’t wait for the province to come knocking. If you have mining opportunities or tourism opportunities or other sectors of the economy – you might be waiting a long time.  If you need to attract population.  If you need to boost enrolment in your local NBCC/CCNB.  If you need entrepreneurial renewal because 50% of your small business owners are over 55 – don’t just wait around and hope for the best.  Hope is not a strategy.

Package up these opportunities – go to the provincial government – and partner with them on a plan to for economic development for your specific community and region.

Everyone needs a mayor and local council to lead the development of their community and partner with adjacent municipalities on regional priorities.