I went to university in the States in the mid-to latter 1980s.  Before that I had almost no exposure to politics.

I have to say looking back it was a politically tumultuous time.  As one example, President Reagan just fired all the air traffic controllers.  Margaret Thatcher in the UK was cracking the whip.  Economically we were facing simultaneously high inflation and low growth (does anyone remember stagflation?).  The Yanks were intervening in conflicts around the world – particularly Latin America (can you remember Imelda Marcos’ 3,000 pairs of shoes?).  As an aside, as a caterer in those years, I served coffee to a meeting featuring Oliver North of the Iran-Contra affair.

My point is that politics was turbulent in the 1980s.  For those of you who were there time and context may have dulled our collective memories but I would recommend avoiding Pollyanna-ish recollections of that time.  I still remember hearing about – in the 1980s – nuclear war school drills where the children would be told to get down and crouch under their desks.  In the 1980s.

Cold war raging.  Domestic and international terrorism expanding.  Stagflation.  High unemployment.  Quebec separatism. Acid rain.  I still remember in elementary school (late1970s) watching a film about the ecological devastation industrialization was wreaking on North American society.  Even crime, by many measures, was quite bad in the 1980s.  Homicide has never been as bad in Canada as in the U.S. and many other countries but the rate nearly doubled from the 1960s to the 1980s and early 1990s before settling back down to almost the 1960s level again in the 2010s. 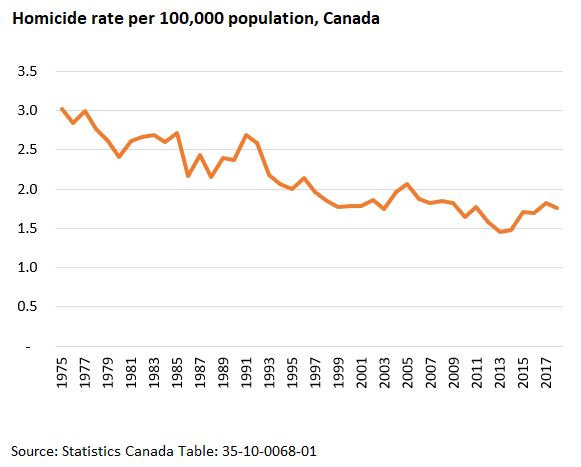 My university roommate was a member of the young Republicans club on campus and was convinced there was a leftwing conspiracy to bring down America as he knew it.  He particularly had a hate on for mainstream journalists like Sam Donaldson (sound familiar?).   The whole edifice that had led to the betterment of America – the first time I heard the phrase ‘manifest destiny’ was when I lived in the States – was under threat and even with a Republican in the Whitehouse we were standing on the edge of a precipice.

Why all this rambling and reminiscence on a Thanksgiving holiday Monday?

Because I am starting to worry that all the doom and gloom out there could actually lead to a self-fulfilling prophecy.   We need to shake our heads a bit and reset around some core principles.

But what happens when there are far more old men and women than young?

We need more young people dreaming dreams of a positive future while old timers and their visions of apocalypse need to take it down a notch.

It got a lot better – in most ways – from the 1980s to now – and there is no reason to think it won’t get better moving forward.

We can’t bury our heads in the sand and hope that the big challenges of the day will just disappear but we can’t live in frustration, anger and fear all the time either.

Let’s put our biggest brains on our technological challenges, give them the support they need and cheer them on.

Let’s reform our economic model – but not blow it up.

Let’s focus on rebuilding social trust (not everyone that disagrees with you is evil).  The dictionary definition of tolerance is “the ability or willingness to tolerate something, in particular the existence of opinions or behavior that one does not necessarily agree with”.

Let’s get back to having faith in our institutions – that faith may need to be re-established in many cases – but let’s not throw out the bedrock institutions that have guided our development since the Enlightenment.

I have no reason to believe things are descending into chaos and anarchy.  We are in a moment right now but I think we can get through it.