When asked in the past why don’t we encourage more births as a way to rebalance our demographic situation my standard answer was that we don’t have enough time.  The wave of Boomer retirements is well underway in New Brunswick and will likely peak within 15 years or so.  If we put the most pro-natalist policies in place today and induced double the number of babies churning out of hospitals, that would do very little to solve our needs now and over the next decade or two.  My argument then – and now – is that we need a large influx of working age or soon to be working age population with the skills, interest and aptitude to work the jobs on offer now and to ensure we have enough to grow the workforce in the future.

But after looking the recent immigration data – permanent residents settling in New Brunswick – I had a bit of a lightbulb moment.  Pro-natalist policies now could actually help boost the working age population now – the parents (and soon-to-be-parents) of the children induced by such policies are workforce age.

Take a look at the breakdown of permanent residents admitted to New Brunswick in 2019 by age group for Moncton compared to the Province of Ontario overall.  The share of 15-29 year olds admitted was substantially less in Moncton than in Ontario while the share under the age of 15 was significantly higher.  If you combine the immigration numbers from the 30-44 and 0-14 age group, they accounted for 69% of all immigrants to Moncton but only 53% to Ontario. 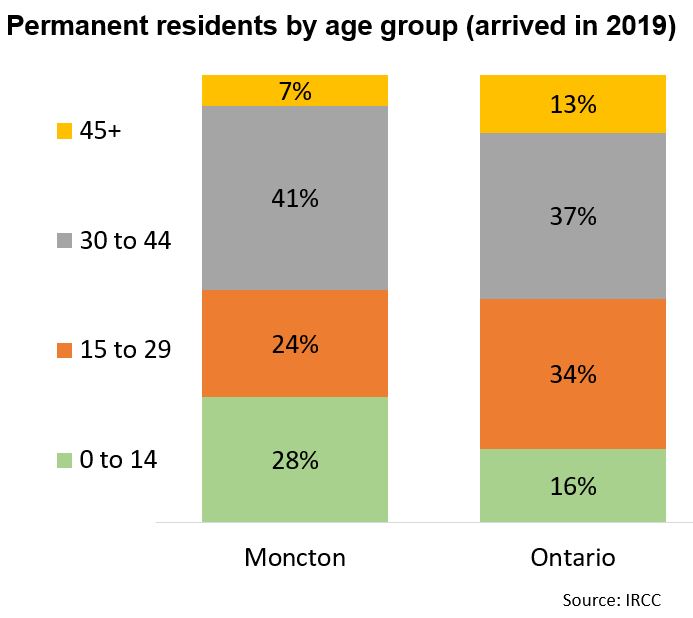 If you think about it this actually makes intuitive sense.  If you attract a lot of unattached young professionals to New Brunswick they are footloose and fancy free.  They, like many young New Brunswickers, might yearn for the bright lights of the big city.  But young parents aren’t as interested in high cost housing, long commutes, congestion and all of the other challenges that come from living in a very large urban centre.

So the lightbulb moment is this.  Promote pro-natalist policies now – not for the babies induced but for the parents it will attract (and retain).  And this is not just about immigration.  Young New Brunswickers who bolted after high school and now have young kids are moving back.

We have some data to suggest this could be happening.  If you look at interprovincial inward migration, the combined number under the age of 10 and between the ages of 30 and 44 increased by more than a thousand between 2013 and 2020.  This doesn’t include immigrants. 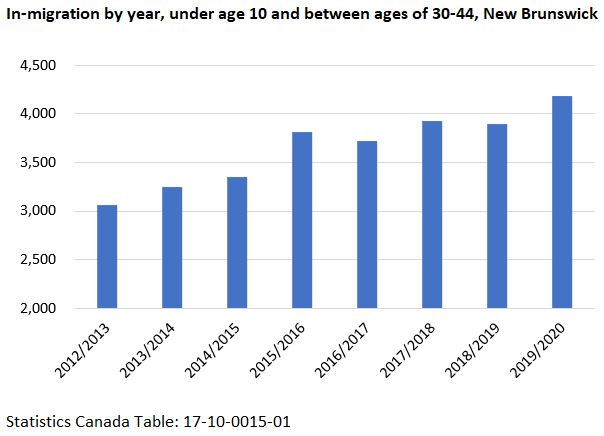 What are pro-natalist policies?  Simply put they can be anything that is meant to encourage more babies and larger families.  These can include big ticket items such as lucrative child tax credits, subsidized child care and parental leave but also a host of smaller issues that make it easier to have and raise children.

Should we try and position New Brunswick as an excellent place to have children and raise a family?  Do we have a strong value proposition?  Do we have very strong pro-natalist policies (big ones and little ones) that make it easier here?

I know there are a lot of demands on government.  Grow the economy.  Cut taxes,  Invest in education.  Invest in health care.  Fill the potholes.

But maybe this is one of those issues that will have positive ripple effects.

Let’s bring on a baby boom!

We have work to do.  If you look at the data, the numbers were mostly on a steady decline for 30 years but then levelled off and started to actually rise again by the Great Recession of 2008.  Then it went back to its downward trajectory. 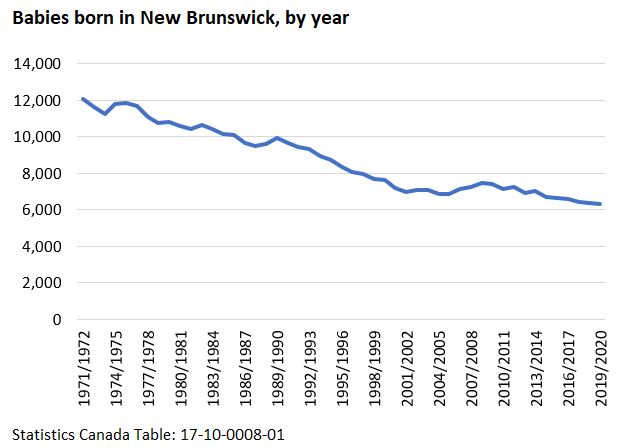