I have received a little bit of negative feedback on my post recently that suggested New Brunswick is spending $75 million less today on economic development  than it was 20 years ago as a share of total provincial government spending.  Some agree with my point that it is hard to make an apples-to-apples comparison over the 20 years and others say I am misleading people because governments in the Maritimes dole out subsidies to firms at a rate much higher than other provinces.  The real comparison, they say, should be between New Brunswick’s economic development spending and other provinces.

However, Statistics Canada does track government subsidies to industry and that gives us one measure of comparison.

Subsidies on products: A subsidy payable per unit of a good or service. The subsidy may be a specific amount of money per unit of quantity of a good or service, or it may be calculated ad valorem as a specified percentage of the price per unit. It may also be calculated as the difference between a specified target price and the market price actually paid by a buyer. A subsidy on a product usually becomes payable when the good or service is produced, sold or imported, but it may also be payable in other circumstances such as when a good is transferred, leased, delivered or used for own consumption or own capital formation. Examples are those paid for agricultural products, transportation services and energy. Government subsidies received by industries are treated as revenues, and are shown as negative entries on the expenditure (input) side of industries. Direct payments to persons are not included here. Government payments to cover operating losses of government business enterprises are included.

Using those definitions, governments in New Brunswick (this isn’t specific to the provincial government) subsidy industry less than all other provinces as a share of industry output.  These subsidies vary from year to year so I took an average of the seven years 2010-2016 just to be sure.

In fact, New Brunswick subsidizes industry 31% less on average than its next closest competitor, Alberta (ahem). Across all industries, the subsidy rate is running around 0.4 cents per dollar of output in New Brunswick.  In Quebec, it is 4.6 times higher. 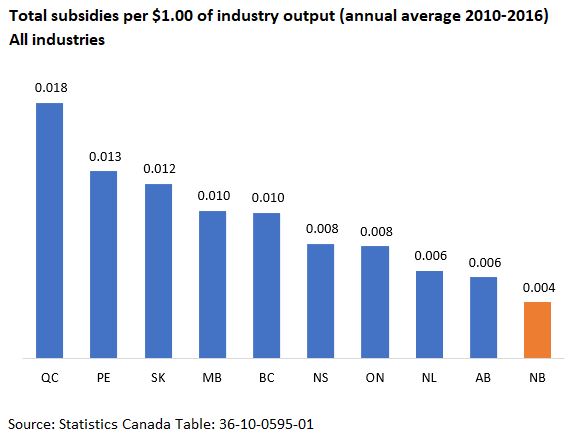 That’s not fair, you say, because it includes subsidies to agriculture and that is a sector we all should be subsidizing so we can get local carrots and, increasingly, soy, on our plate. Well, it is true that agricultural subsidies are a fairly large part of the pot but this is not the only industry getting subsidized. 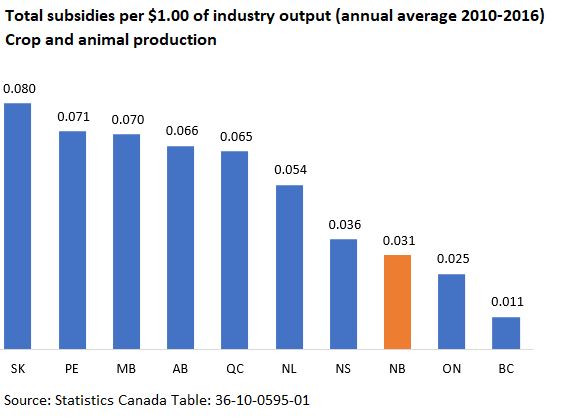 How about manufacturing?  I can’t even use the seven year period because there were years in there when Statistics Canada couldn’t find any subsidies for New Brunswick but using the period where there is data, New Brunswick ranks last – by far – and the free market Alberta?  I’ll let you read the chart yourself.

For those of you wondering about the IT sector, New Brunswick does have a higher subsidization rate in this sector – similar to Quebec but lower than PE and NL. 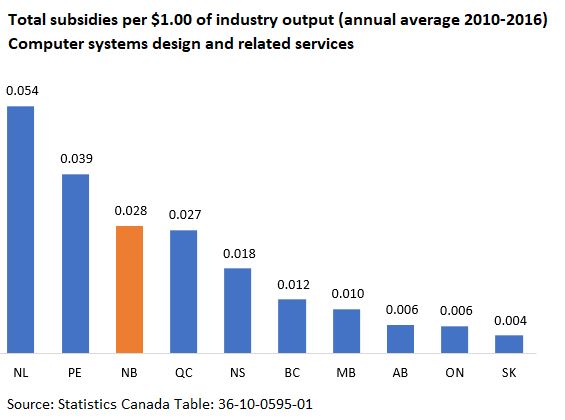 And no analysis of subsidies would be complete without the grand poohbah of subsidies, the film and video industries production sector. The table below is only for 2016 because in the past New Brunswick had one of the highest subsidization rates in the country but changed its mind around 2015.  Yes, you are reading this correct.  Subsidies for this sector are in the 40+ cents per dollar of industry output in four Canadian provinces.  But, in fairness, residents of provinces with high subsidy rates get to see their cities, towns and rural areas on Netflix every once in a while. 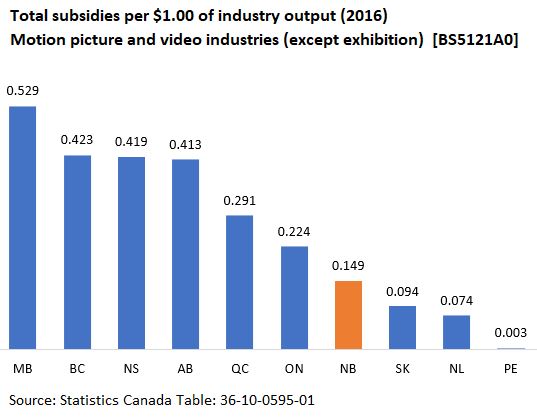 I have said many times I’m actually not a huge fan of direct subsidies to industry.  I know there is a new paradigm emerging – led by Mariana Mazzucato and others that focuses on ‘co-creation’ of strategic industries and that government should play a far more direct role in deciding what industries should grow and who should benefit.

There is a public interest in this, of course, but I am just a poor humble guy who started his life in Petitcodiac and has longstanding roots in the Miramichi.  Instead of the grand vision for the world, my preoccupation is laser focused on New Brunswick and the other Atlantic Provinces.

And here, I think we should be focusing on what industries and opportunities have the best potential here – on the ground – and determining what the right role is for government to help foster business investment and entrepreneurship in these opportunities.  I’ll leave the grander view – and likely Nobel Prize in Economics some day – to Mariana.  Maybe I’ll win runner up Person of the Year from the Digby Chamber of Commerce or something.

I wouldn’t get too caught up in that debate.  The real question is are we doing enough – across the province- to foster a strong economy so that we can continue to offer high quality public services and invest properly in public infrastructure?   Are we doing enough to ensure that young New Brunswickers have opportunities to stay at home after graduation should they want to?  Are we doing enough to create the conditions such that newcomers will want to stay here long term and put down roots?

If we are comfortable answering yes to these questions, then we are investing enough.