The good news when a party wins a second mandate – particularly after the first one was truncated – is continuity in government.  The last Premier to win and complete two full mandates was Frank McKenna – and he left in 1997.  There are 180,000 New Brunswickers who were not alive the last time a Premier completed two consecutive terms.  For those of you who will say what about Bernard Lord, remember Peter Mesheau brought his government down well before the end of the second term.  Graham, Alward and Gallant all were one term Premiers.  So, now we should have some stability.

So, it’s time to get serious about economic development.

In the recent 2020-2021 budget,the New Brunswick government spent 1.7% of its total expenditures on economic development. Again, this includes ONB, RDC and Tourism, Heritage and Culture, and many of the expenditures don’t really count as economic development but it is the closest we can get to apples to apples. One of the things that governments have done over the years is modify departments and spending just enough after each change in government to make a true apples to apples comparison over time much harder but this comparison is pretty good.

So what does it mean?

It means that government is spending $75 million less on economic development today each year than it was back in 1999-2000 as a share of total provincial government expenditures.

Those of you that follow this blog – and some of you have done so since it started in the early 2000s – know that I have never equated the amount of spending on economic development as the main way to measure the importance of economic development.  I don’t necessarily believe that pumping cash into firms is the best way to do economic development, either. But as one indication of your commitment to economic growth, I think the $75 million deficit is worth a conversation.

Why has the amount slipped over the years?

General atrophy is likely one good reason.  If you were to ask the public do you want more spending on health care or giving cash to big evil corporations – which do you think they would pick?

The truth is that governments have not done a great job of defining what they mean when they use the term economic development.  If it was about empowering communities, building a strong economic base in all regions of the province, etc. that might get more public support than “grants and loans to industry” as the one definition that many New Brunswickers put on economic development.

How would I recommend investing the $75 million?

As I have said ad nauseum not every region of the province has the same assets, attributes and opportunities and therefore not all regions can expect the same outcomes but all regions should have a fair chance at development.  Cutting economic development spending as a share of the provincial budget by one-third over 20 years is not necessarily the right move.

I know this current government is a little skiddish about giving out cash to firms.  Then give the new money to accountable, private sector-led regional economic development groups working closely with municipal governments around the province. Build a strong team provincially for the things that can and should be done at a provincial level and ensure that local and regional partners have the tools they need to properly fund economic development and population growth.

For years I talked about a dedicated property tax to fund economic development at the local/regional level. It never got any traction.  If you don’t want it baked into the tax system, then find another mechanism.

But the performance of the overall economy 80% worse?  Crickets. 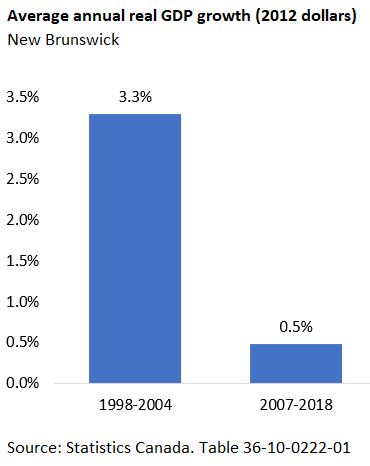 This is likely because many people don’t believe government can influence the trajectory of a $30+ billion economy by spending a few dollars more.  Fair enough.

But couple appropriate spending with excellent policy and an economic development-friendly environment (with a huge dollop of people attraction) – and I do believe over time we can move the needle.

Four ideas on where to spend my fantasy new investment into economic development:

1. Spend more on economic development capacity around the province with a focus on a) building the case and shining a light on economic opportunities specific to each region; b) ensuring a pipeline of entrepreneurs to take advantage of local opportunities; and c) putting in place population growth plans to ensure there are enough workers to meet labour demand in the future (this includes enough housing stock).

2.  Bring provincial investment in R&D up to at least the average among the provinces.  Bernard Lord’s goal way back in 1999 was far more ambitious than this but if we could at least get to mediocre I would be happier.  Again, not just willy nilly spending on R&D but investing in ways that leverage other sources of funding and boost the value proposition for private sector investment in specific sector opportunities.

3. While not part of economic development spending, double down on immigration and on boosting international student enrolment in our PSE.  This is critical.

4. Put the focus back on leveraging what we are good at as a province to drive sustainable longer term economic growth.  Are we really doing enough with our mineral resources?  Are we maximizing the potential of our agriculture?  Are we building centres of excellence around strengths in our universities and colleges?  Are we really serious about tourism?  What other opportunities are there – small and large?  I’d like to see the province humming with energy and activity – from one end to the other.

I know there is institutional memory in government.  There are still those who remember Bricklin and Atcon.  In the residual memory there is LJR’s attempts in the 1970s to build industrial parks and port infrastructure all over the place to attract investment.  Maybe we start with something a little less ambitious.  Just start with having bodies on the ground around the province working on economic opportunity identification and development.

When the Premier visits St. Stephen or Campbellton or Woodstock he can ask “what are the 10 things you are working on right now to ensure your community will have a prosperous future?”

If we get this right, he will get an answer.

1 thought on “Congratulations on your victory, Premier Higgs. Now a few thoughts on economic development.”