In the past few months I have had a larger number than usual of people reaching out to seek my advice or to ask about job opportunities at Jupia Consultants.  Many hope I can refer them to someone that has a job opportunity and that I can vouch for them after only a brief interaction.

I don’t mind helping if I can but the reality is I don’t have a fat Rolodex of contacts willing to hire people based on my recommendation, and that assumes I will recommend someone I only met briefly.

I do have a few observations for those starting out in their careers or who have just moved here and are looking to start their careers – for what they are worth.

First, I empathize with you.  I graduated with an MBA and no real experience in 1991.  It took me nearly two full years to land a job that I could parlay into a career.  I didn’t know the ‘numbers’ back then but it’s lucky I ended up getting a job at all.  Look at the following chart. In the early 90s there were nearly 117,000 young people living in New Brunswick (aged 15-24) – at some stage of seeking employment – this during a recession/aftermath and at a time of chronically high unemployment.  Further the number retiring each year was a fraction of those joining the workforce (far more coming in than going out).  By 2019, the number aged 15-24 living in New Brunswick has dropped precipitously while the number between the ages of 55 and 69 has more than doubled. 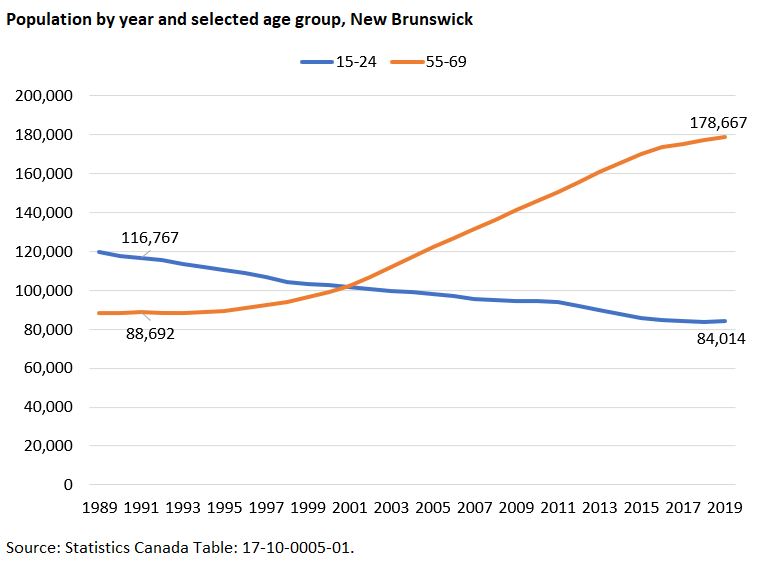 In those days many firms (certainly not all) sent what was known colloquially as ‘PFO letters’.  I’ll let your mind wander to define what that acronym means (hint, they were polite about it). At least they took the time.  Today most firms/organizations don’t even respond.

I have saved 70+ of these letters just for the fun of it (see the pic below).  I put NBTel on top of the pile because a recruitment manager that I talked with told me they had thousands of qualified applicants for a handful of positions.  Further, she said, they would prefer to hire graduates from a Canadian university (oopsy, I went to the U.S.).  The list of PFO letters is quite something – and includes all the big consultancies, many cities/towns and multiple economic development agencies including Miramichi. 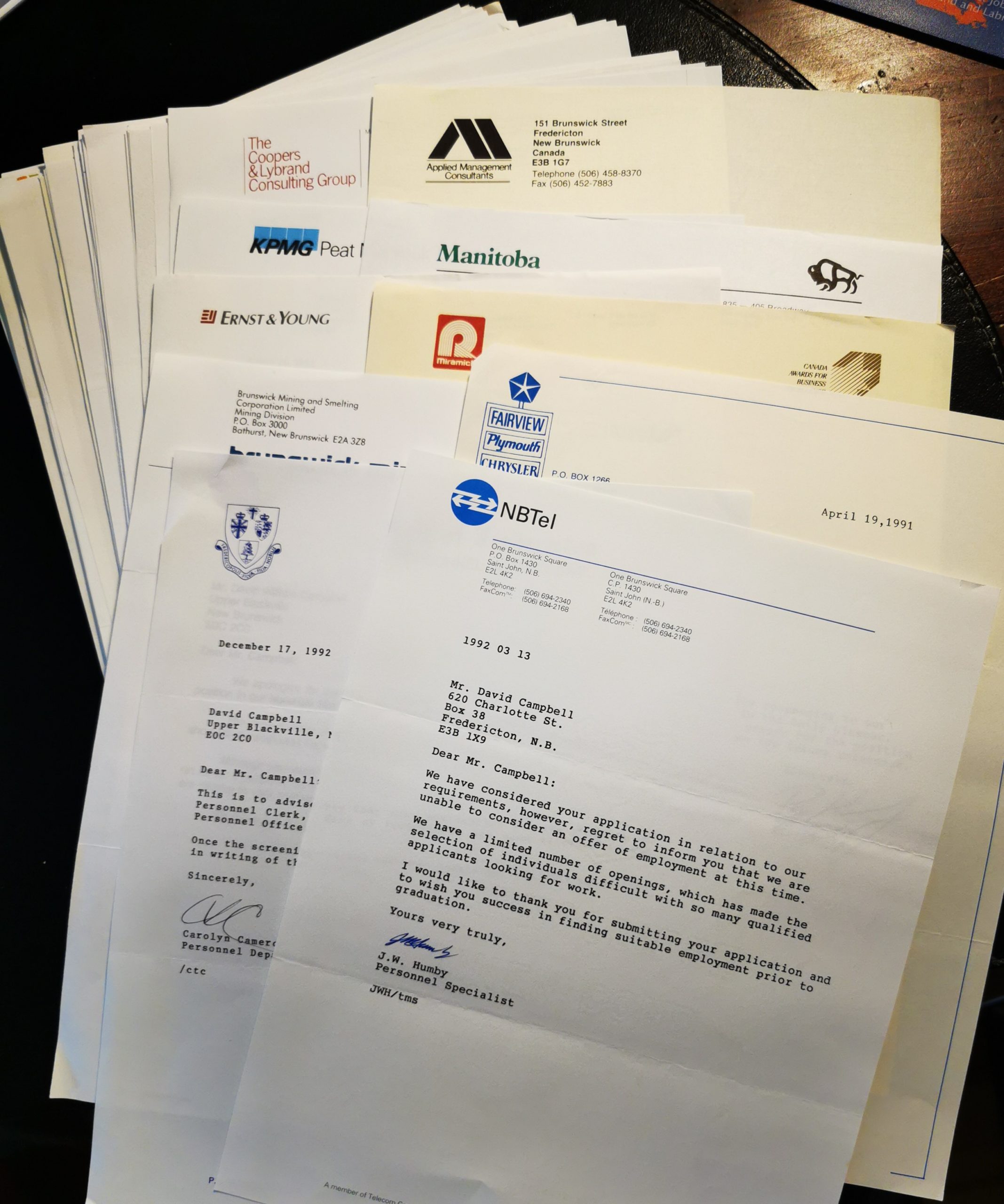 After hundreds of applications filled out, a couple of dozen interviews and a stint trying to find jobs in Alberta, I ended up getting a three month contract job with the Government of New Brunswick paying $12/hour (around $19/hour today, but because I worked 60/hours/week it was likely more like $8/hour). This brings me to my second point.

Take anything in the short term that builds your resume. I know that unpaid internships have mostly gone out of fashion but after months and months of searching I would have paid a firm to bring me on a for a few months to prove my worth.

Work hard and make yourself un-let-go-able.   I was determined when I got that three month job to turn it into 6 months, a year, more – and I worked really hard.  Again, I suspect the idea of working 60-70 hours a week has fallen out of favour but I was usually the first in and the last out – sometimes then Deputy Minister Francis McGuire would still be in his office – but everyone else was gone.  I went to the UNB library and poured over Statistics Canada tables to find little nuggets of data that we used to promote New Brunswick.

I understand this idea sounds a bit cliched but I think it remains very relevant.  If you get in the door – internship, coop, probationary period, whatever – look around and observe other young people that are excelling and try to mimic them.  If the firm/organization is small – understand what really matters and determine to make yourself un-let-go-able.

Boost your education.  Don’t spend an extended period of time just unemployed.   This won’t be good for you and it won’t look good to potential employers.  I’m not saying go get a Master’s degree but take relevant courses online, boost your bilingualism, do something to show you are committed to your career.

Work.  Again, don’t spend an extended period of time just unemployed.   Work in retail or food service or anything to keep busy and get actual work experience. Who knows? You may just work your way up.  I know someone who started in a minimum wage front line job and worked their way in that company to a head office job.

Network.  Despite my seeming cynicism above, it is important to build your network.  Even that little 3-month job I got came from someone who was related indirectly to family (thanks, Mike M.).  I’m not recommending you spam your LinkedIn contacts but build a few key relationships – through school, through social settings, etc.  They might pan out eventually.

Be prepared to move.  I know my colleagues in the economic development biz will hoot and holler but New Brunswick is a small place.  If you are open to living anywhere in Canada (or beyond) you will expand your opportunities.  I know for some this is harder than others but if you are mobile it can really helps your career path.  Besides, a lot of folks leave for work, get really good at something and then move back.  New Brunswick is seeing consistently positive migration rates among those in their 30s and early 40s. We may not be the best place in the world if you are looking for a rave but if you are looking to raise kids – this is a pretty good place to do it.

Don’t give up.  There was a brief window where I grew my hair into a pony tail, tied it up in a bandanna and worked my way around the U.S. for weeks in a 1975 Chev Nova.  I can now say I’ve been in every U.S. state (continental) and Canadian province and territory but I’m not sure this helped my career prospects.