I used to gently poke fun at New Brunswickers about their voting preferences. Throughout the 1990s and early 2000s they would consistently tell pollsters their top concerns were jobs and the economy (and, typically, health care) and, yet, when it came to actual voting it didn’t seem the economy was a particularly important theme.

In the 1960s through to the McKenna years, the economy was a primary driver of votes.  In my latest Growing Pains podcast I talk with historian Dimitry Anastakis about New Brunswick’s efforts to attract a car manufacturer in the early 1970s.  He says Hatfield made this a central theme in his election campaign.  In the LJR years, big economic development promises (such as new industrial parks, new mining projects, new infrastructure investments) were peppered throughout campaign platforms.

I am sure the parties will all say they have a robust economic development plan in 2020 but there hasn’t been much so far.  Lots about Covid-19 and safety, school reopening, heath care, the cities are pushing municipal reform, affordable housing is now on the radar (a good thing and linked to future economic growth). Most of the parties are proposing some $$ for targeted groups.

But other than the Liberal push for more cybersecurity, I haven’t seen many new proposals on the economy. Certainly gone are the days of government making big audacious economic development promises.

I’m actually not criticizing the politicians.  They are trying to reflect what they think are the priorities of New Brunswickers.  You can bet if a political party thought it would be a vote getter to promise attracting Elon Musk and electric car manufacturing to New Brunswick, someone would make the promise.

So, here is the platform I want to see if a party wants my vote.  I hope it correlates with some of you, and I hope it resonates with at least some politicians.

Have a strong Covid-19 economic recovery plan.  Most of this so far has been the focus of the federal government.  The provincial government may have to do more heavy lifting.  There are hard challenges ahead.  We want to be a place where local entrepreneurship can thrive but we don’t want to keep zombie companies afloat with taxpayer money.  As I have pointed out elsewhere, in a typical month pre-Covid-19 more than 600 businesses closed across the province.  Hundreds of businesses go bankrupt each year in normal times.  Our goals should be to come out of this pandemic with a thriving economy and lots of local entrepreneurs duking it out for local business markets. If there are structural changes in the labour market, we will need a plan to address this.  If we have permanently lost certain export markets, we need to think about how to replace those markets.  In short, we need a government that takes this seriously.

Commit fully to increasing immigration even in the time and aftermath of Covid-19.  Our underlying demographic challenges have not magically disappeared and, in fact, Covid-19 might hasten the exit of some older New Brunswickers from the workforce. New Brunswick has seen a sharp increase in the number of immigrants active in the workforce even during Covid-19.   I’d like to see us up to around 10,000 per year (immigrants and TFWs) within three years from now.  An inability to meet labour demand will crush our economic potential in the years ahead.

Engage with communities and regions around the province to develop meaningful economic development strategy based on local/regional strengths, assets and attributes.  We have some people working on this at the provincial level and a few working at the local/regional level but I believe we need lots more.  This isn’t about matching entrepreneurs to government funding programs.  If your economic developers are spending the bulk of their time helping entrepreneurs access government funding, you are making a mistake. For me, it would be ideal if there were clear opportunities with hard metrics being pursued in Charlotte County, Victoria County, the Acadian Peninsula, etc.  This would definitely include population attraction and housing development.

Better engage and give more responsibility to local government and to local NGOs to help address some of our thorniest challenges.  I know in a small province there is a tendency to centralize decision making in the provincial government but the solutions are more likely to be found locally and if local government, NGOs and community leaders feel they have some control over their destiny they will put more skin in the game.  New Brunswick has 50-60% fewer workers in local and regional public administration adjusted for population size compared to Alberta, Saskatchewan and Ontario and 13% fewer than our neighbour in Nova Scotia (NL and PEI #s suppressed in this data set). What does that mean in practical terms?  We would need nearly 1,000 more local government workers to match the per capita level in Nova Scotia.  We could put 50% of these into economic development roles (smiley face). Empower local communities and regional collaborations but also push for accountability and results. 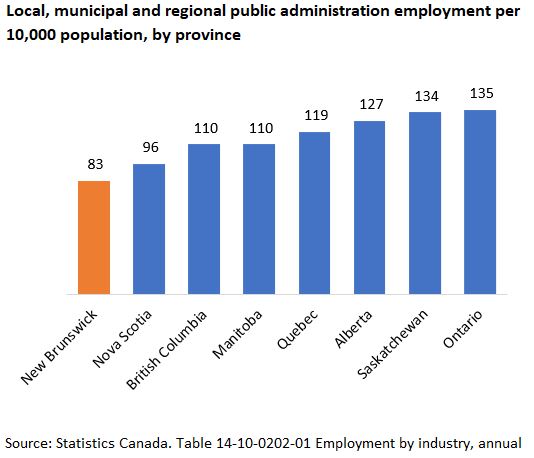 Commit to reading It’s the Economy, Stupid! and listening to Growing Pains on the Unsettled Media network.

Agree to my six points above, and you will get my vote (I can’t commit my wife and kids as they seem to have gone rogue).

2 thoughts on “Economic development and the New Brunswick election”