One of my mantras over the years has been the term “appropriate role for government” when it comes to economic development.  I want government officials, policy makers and community leaders to put serious thought into this question. I’m not sure we do.

Governments decided a while ago that we don’t want to protect national champions anymore by putting up huge tariffs and other barriers to entry for foreign competition (although the auto manufacturing sector and others are still ‘carved out’ for special treatment).  Governments also don’t want to provide massive subsidies to attract investment here.  So the result is that New Brunswick constantly has among the lowest rates of government subsidization of industry in the country (and probably North America but that is harder to calculate).

New Brunswick’s largest export sector (by GDP value) is the forest products sector and it gets constantly scrutinized by the Yanks to determine if the province is in violation of treaties (mostly rejected).  Apparently Ontario and Quebec are not as scrutinized.  The following table shows the average annual government subsidies* on production per $1 million of sector output for the period 2012-2016.  For New Brunswick, Statistics Canada is showing nothing for subsidies in all forest products sub-sectors except sawmills and that subsidy worked out to be a paltry $200 per $1 million in output.  Quebec shows subsidies for four of the five main subsectors and Ontario goes big when it subsidizes a sector. As the definition below states, this could be cash to help with environmental goals or training or whatever. 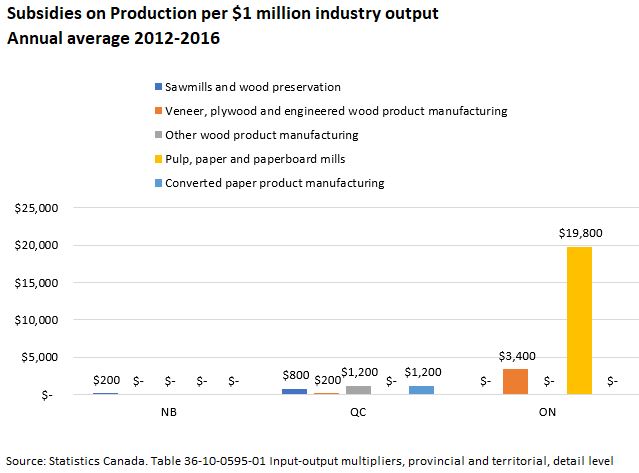 This is why I got some goosebumps this morning when I read that Saskatchewan “is plowing ahead on a $4-billion megaproject to double the irrigable land in the province, completing a vision to harness the waters of Lake Diefenbaker that was abandoned almost 50 years ago.” “Premier Scott Moe revealed the 10-year plan to irrigate up to 500,000 acres of land in west-central and southern Saskatchewan. He called it a “generational project” that will yield massive economic returns.”

Essentially a provincial government in a province not much larger than New Brunswick is committing to an investment of $4 billion in taxpayer dollars to ensure an industry – farming – can grow in in the future.

When was the last time we saw a $4 billion investment in New Brunswick to ensure inter-generational growth in a specific industry?

We used to build large electricity generation facilities when a company came along and wanted to build a pulp mill.  Now, I’m not sure.  There have been a few very large electricity users nosing around in recent years and I think the response has been basically that we don’t have the capacity to service them (I could be wrong).

I don’t have any specific ideas here.  I am not suggesting New Brunswick give Tesla $2 billion to put their auto manufacturing plant here.  I am still not a fan of huge direct subsidies into specific firms.

But I am a fan of governments looking at economic strengths, assets and attributes and determining the “appropriate role for government” when about long term economic development.

In the past we used to invest the equivalent in today’s terms of tens of millions to assess mineral deposits in the province and then shop that data to mining firms to entice them here (like Nalcor does today).  Now we don’t.

We spend a few bucks on tree planting/silviculture every year but the taxpayer investment is really quite modest.

What else? Should we boost public investment in post-secondary education?  Should we carve out a huge area of land out the Paster Rock-Renous highway for agriculture development?

Should we invest in large scale water irrigation systems and turn a big chunk of the St. John River Valley into Leamington, Ontario’s greenhouse sector?

What about cybersecurity?  Again, maybe not direct subsidies to firms but how about becoming a talent and research factory for the globe?

Or maybe we continue to believe the best role for government is providing small business loans and dribbling a few bucks here and there to keep the lights on at a few sector initiatives?

I don’t know.  Talk amongst yourselves.