There is a young lady on social media who is elbowing her way around Saint John on something related to policing and Jacques Poitras had a story on her this a.m.  She responded by posting the following commentary to her story and suggesting how depressing it was: 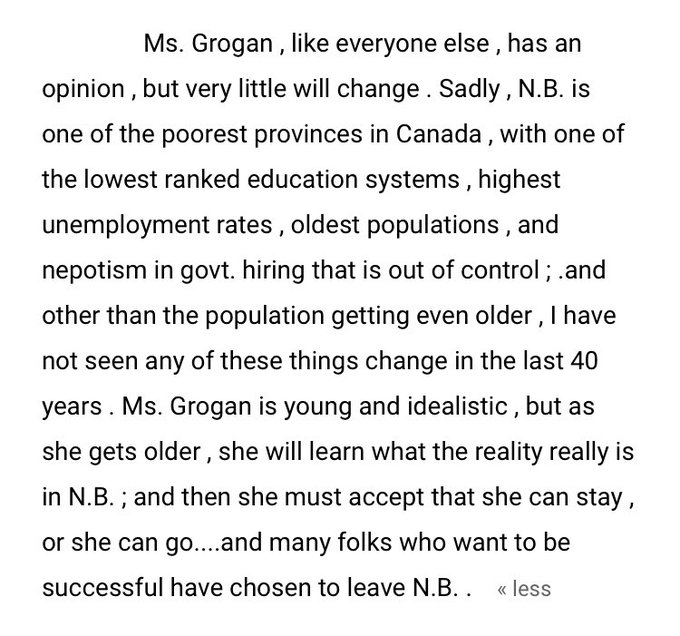 Now, it is very unlikely that many – or any – of Ms. Grogan’s followers – actually follow It’s the Economy, Stupid but in case some do, here is my response to this commentary which could have come right out of 1970s New Brunswick.

#1 – NB is one of the poorest provinces in Canada. First of all there are only 10 provinces so saying ‘one of the most’ when the total is 10 isn’t saying much.  The reality is the term ‘poor’ can mean many things but you have to put things in perspective.  The following chart shows the median total income of couple families in New Brunswick by age group compared to the rest of Canada.

Poorer?  Yes, but please put give it some perspective. 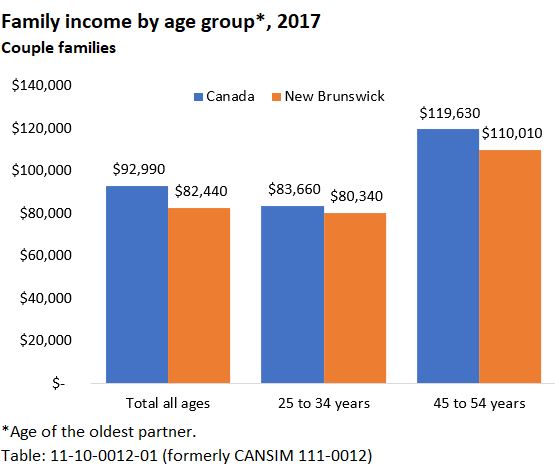 #2 NB has one of the lowest ranked education systems.  I’m not downplaying this one – I have written about our challenges before but, again, please put in perspective.  On the PISA tests taken by 15 year olds around the world, for achievement in reading, New Brunswick ranked ahead of all but a handful of OECD countries including the Netherlands, Austria, Switzerland, Italy and Israel.  For achievement in science, New Brunswick ranked ahead of dozens of countries including Portugal, Norway, Spain, etc.  On that measure we were even ahead of Manitoba!  We need to work on this for sure but let’s put things in perspective.

#3 NB has one of the highest unemployment rates.   What do young people say?  Something about a mic drop? Betcha haven’t seen this one before: 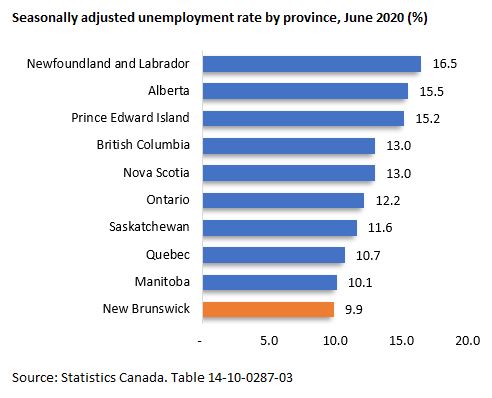 #4 NB has one of the oldest populations.  Again, you have to put this in perspective. In Canada, we do but compared to many places in Europe we are relatively young.  And, because we are importing younger immigrants, I project we will actually start to see the median age decline in New Brunswick (i.e. we will be getting younger) by 2021.

#5 NB has nepotism in government hiring.  This one is completely subjective because who would be counting? But based on my experience this type of thing is way down these days – it may still exist – but I would be surprised if it is anything like the stories in the 1970s.

#6 Nothing has changed in the last 40 years.  Well, where to begin.  The unemployment rate has dropped significantly since the late 1970s/early 1980s.  Real household disposable income per capita is up 80% since the 1970s. Real GDP per capita is up 90%.  Remember these are inflation adjusted. Based on the low income cut-offs before tax, 1992 base, the share of the adult population in low income has dropped from 21.7% in 1978 to 7.8% in 2018.  If Rip Van Winkle hasn’t seen this in his/her life – that’s sad – but for the vast majority of New Brunswickers life is much better now economically than it was in the 1970s.  As for the impact of technology, the hundreds of kilometres of twinned highways (NB now has more kilometres of four-lane highway per capita than all other provinces) and other infrastructure and amenities that people didn’t have 40 years ago, I’ll leave it to you to decide better or worse.  Oh, and don’t forget avocados.  I don’t recall buying avocados at the Tingley’s grocery store in Fredericton 40 years ago.

#7 Many folks who want to be successful have chosen to leave NB.  This is correct, but again, some nuance is needed.  First, in the past 3 years more people have moved to New Brunswick through interprovincial migration than have moved out.  In other words more came here from other provinces than left.  Second, if you factor in immigration, more people moved to New Brunswick in 10 of the past 12 years than have moved out.  So this ‘goin’ down the road’ thing that Rip Van Winkle remembers is a thing of the past.  Now, of course people leave to pursue their careers elsewhere.  That happens in every province – Toronto has a negative migration rate with the rest of Ontario – more people move out than in – Toronto!  The key number is the net number.

As I see it the problem we have here is that there are a number of older, embittered New Brunswickers who figured out how to use social media and are projecting their aches, pains and grievances on the kids.

I would suggest young people do your own research (e.g. follow this blog and listen to the Growing Pains with David Campbell podcast) and let the oldtimers rant and rave.

By the way, you should follow some old timers with a good vision of the world.  They are out there too.

4 thoughts on “Hey Rip Van Winkle, if you are still stuck in 1970s New Brunswick, here are a few facts for you to consider”