I was recently in Dingwall, Nova Scotia with my 87 year old dad (not sure if Dingwall is entitled to its entitlements or not – if you don’t recognize this increasingly obscure reference, just Google it).  He looked out the window at the little cluster of cabins on a pristine Cape Breton shoreline and remarked “someone took this piece of land, invested a pile of money, built all these cabins and the restaurant and hoped people would come.  I admire people who do this kind of thing.”

Now, you need the backstory.  My father was a Baptist minister.  He had a canned sermon that he would trot out on a regular basis on “the love of money is the root of all evil”.   He wasn’t exactly enamoured with capitalists and capitalism.  But he appreciated then (and now) that business owners – entrepreneurs – are an incredibly important part of our society. He might not have a detailed knowledge of it but he has an intuitive understanding and, in fact, has asked me rhetorically in the past “where have all the business owners gone?” when reflecting on what has changed in his neck of rural New Brunswick.

Entrepreneurs are critical to the success of economies.  They amass a little capital (sometimes a lot of capital) – normally a large chunk of which is their own – and they deploy this capital.  Some ideas work.  Some don’t.  Many successful entrepreneurs plow some of their profits back into their communities both philanthropically but also to support other entrepreneurs.

My father pines for the day when every small community had its own general store, accountant, lawyer, doctor, etc.

I’m not suggesting we need to get back to that idyllic vision of entrepreneurship but I do believe if there is a market opportunity – no matter how big or small the community, you want entrepreneurs ready to pounce.

More than a decade ago now, my brother decided to set up a physiotherapy clinic in Doaktown because he saw a clear opportunity as everyone had to drive into Miramichi or Fredericton to access the service. He was a health care entrepreneur – saw a niche and grabbed it.  He thrived there for months until the government sent out one of their physios to compete with him (he charged, the government physio was free), he lost the business and had to close the shop (the sign, incidentally is still there).  Within weeks, the government changed its mind and patients were forced to drive in to the big city again to access physiotherapy.

Health care may not be the best example to use in New Brunswick but if Minto needs another dentist, if Harvey could use a cafe, if Neguac could use more construction contractors, if St. Quentin could use some more accommodation providers, etc. we want to be a place that nurtures and supports this kind of entrepreneurial environment.

Forcing everyone to drive into the largest cities for services is lazy and, I would argue, even sloppy.  Intrepid entrepreneurs should be able to pick up on that and exploit market niches.

This certainly applies well beyond local services.  If a researcher at UNB has a great idea that could become IP and taken to market we need to be a place where that is relatively easy.  If an officer worker at a bank has an idea for a piece of software to streamline a process, she should be easily able to jump into entrepreneurship. If an inventor has an idea on a new use for potash, that inventor should have the supports needed to move the idea forward. 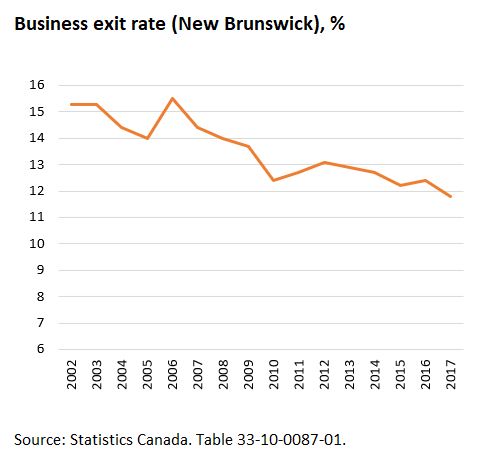 Don’t misread me, I’m not talking about taking away entrepreneurial risk.  Good ideas should win, bad ideas should lose – government shouldn’t be in the business of picking.  But an environment that is supportive of entrepreneurs will have stakeholders that also take risk (capital providers), governments that explicitly want to encourage entrepreneurship and a focused strategy to make the community or jurisdiction ideal for entrepreneurs.  This, increasingly, includes the attraction of entrepreneurs.

I also don’t believe this means there is no role for national and international firms.  There is a crucial role for big firms to support thriving local economies and communities.  Just not an overriding role.  If our communities end up post-Covid-19 with just a bunch of multinational firms – Costco, Walmart, Pizza Hut, etc. and far fewer local firms – that will be a fail, IMO.

We need to double down on being a place that fosters, encourages, nurtures, pokes and prods, entrepreneurship.  We need to attract entrepreneurs from far and wide to come and, along with local young entrepreneurs, take over for the 40%+ of business owners that will be retiring soon.

I provided some data on entrepreneurship in New Brunswick in the recent Turning Point series.  While this data is clunky as a profile of entrepreneurship, it does provide us with something to talk about. 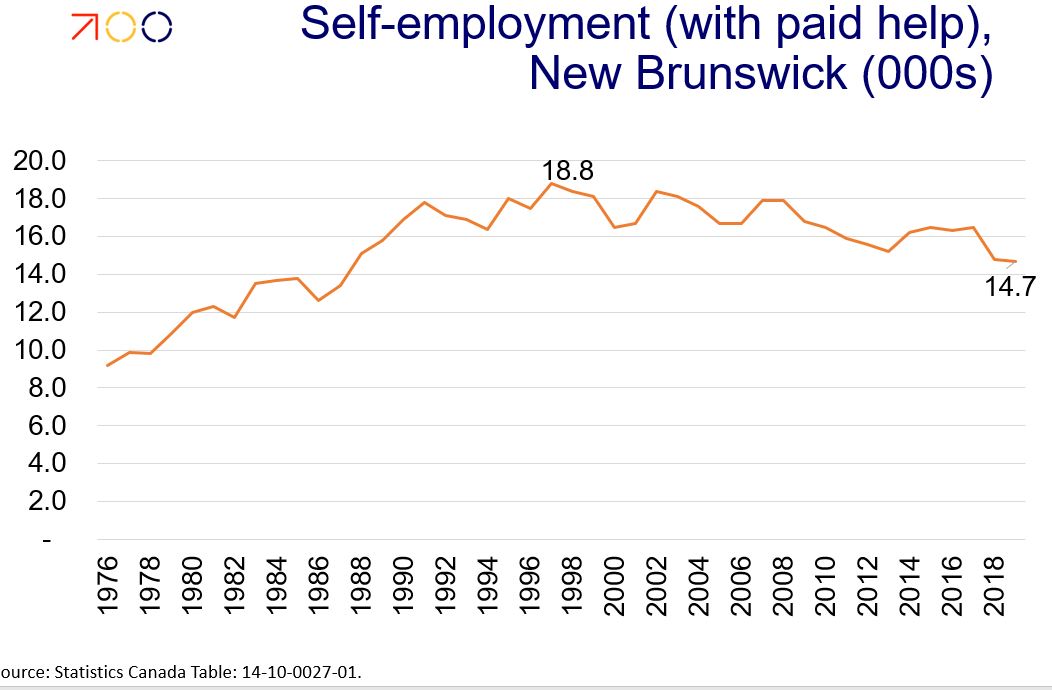 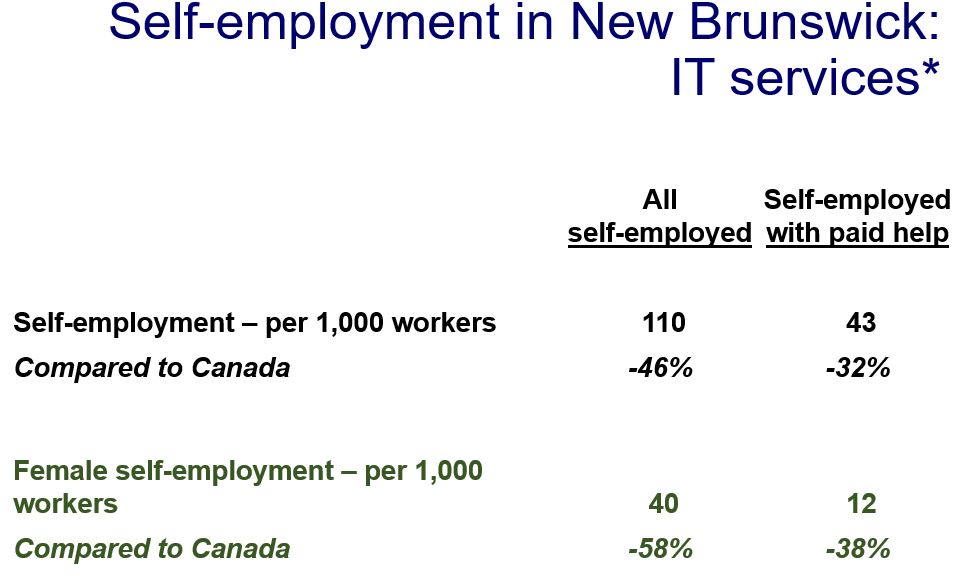 This actually doesn’t apply to more limited risk public sector-focused entrepreneurship.  If you look at self-employment in ambulatory health care, New Brunswick has an above average self-employment rate – among females and young people too. 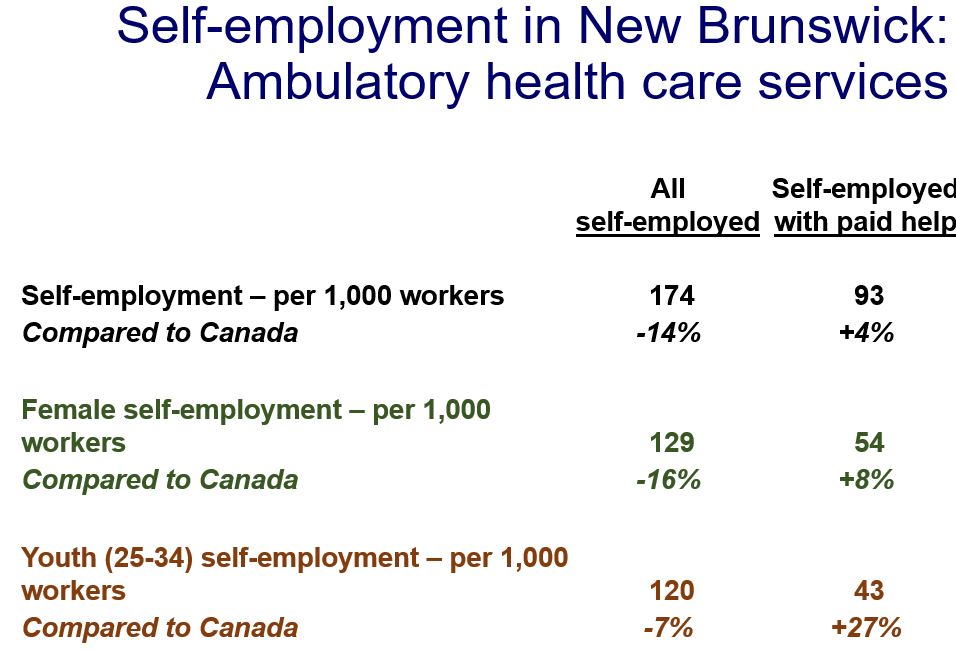 2 thoughts on “Calling all the entrepreneurally-minded: Uncle Tim Horton wants you!”