After having just scrolled through a couple of hundred Tweets populated with outrage, absurdity and falsehood, I clicked on this Huddle story about Veronica Paul and her hops farming operation in New Brunswick. Maybe it was my state of mind at the time but I was heart-warmed by this.  Paul decided she didn’t want to be in the insurance business, bought a farm and is gettin’ ‘er done.   Most farms in New Brunswick are small or hobby farms but she has built a commercial scale hops farm.

Long time readers will know of my affection for farming.  Sometimes it’s hard to see the ‘value’ from what I and many other office workers do all day pushing paper around and tweeting a little too much – but there is no mistaking the value of farming.

In the early 1950s, New Brunswick used to have 3.5 million acres of farmland but the number steadily declined over the decades. 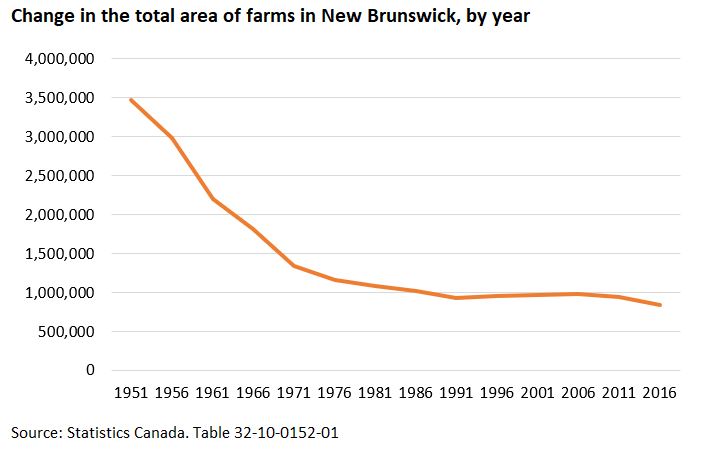 Because of the steep decline in the early decades inthe chart above it is a little hard to see the 17% decline in farm acreage since 1986 (most of this decline in the past few years).  As shown in the graph, only NL has witnessed a larger drop according to Statistics Canada.  Good old BC has actually witnessed an increase in farm acres (although the number dipped between 2006 and 2016). 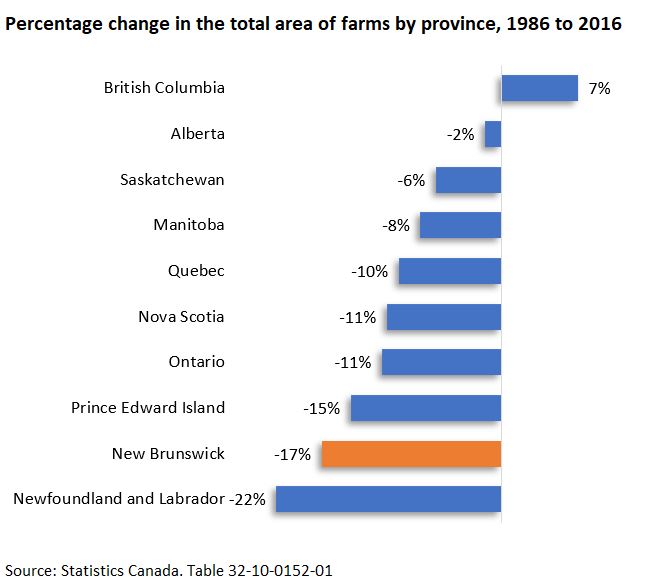 I have been saying we should do as much as we can to promote farming.  I know we are a small province and it’s hard to have farms at scale but maybe we should be trying to figure this out.

We are looking for economic growth opportunities.  I’m not suggesting we cut down all the trees and turn the land into farmland the way so many jurisdictions have done but there must be several million acres of land here that used to be farmland that could be again.

Where are the potential farmers?

What are the farming opportunities that could have commercial scale potential?

What is the appropriate role for government?

Who is working on this?  Particularly at the community level?  Inventorying land, addressing farmer succession, helping to assess local, regional, national and international demand for crops and animals that thrive in our environment?