My wife and youngest daughter drove out into Albert County on Saturday just to get out of the house.   We went for a walk around an old mine site in Albert Mines (pictured).  I took the unsolicited opportunity to opine to my daughter on the importance of jurisdictions having an export-based economy.  Maybe I have been spending too much time in conversation with Herb Emery and Richard Saillant lately but I remain convinced that our future prosperity will be highly linked to the province’s export sectors. 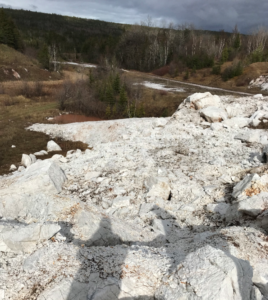 I have written about Albert County before because it is such a good example.  Going back 150 years and more the region has leveraged its water, forests, minerals and other natural resources for economic development. Over a hundred years ago natural gas from the county serviced the City of Moncton.  Albertite, a kind a asphalt, was discovered in the county and mined for quite some time in the 19th Century.  As an aside, Wikipedia suggests extraterrestrial Albertite has been detected on the dwarf planet Ceres.  I’ll leave it to you for speculation.

In just the past 20 years or so, Albert County (and here I mean the county excluding the Town of Riverview) has gone through an even more pronounced demographic shift than many other places.  In 1996, when I was a young buck trying to convince industry to locate in New Brunswick, Albert County was relatively young.  Nearly 30% were under the age of 20.  Now the share is 11%. 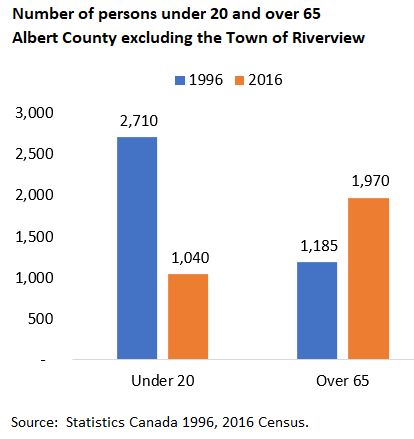 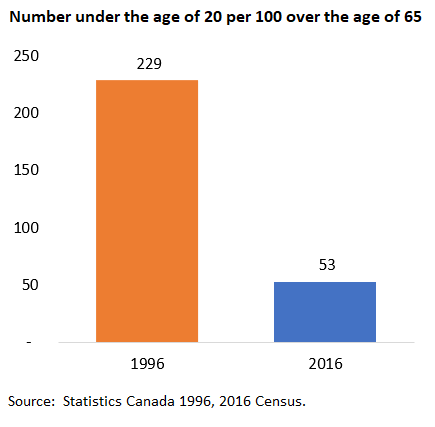 Ono of the biggest challenges for me is the lack of people on the ground supporting economic development in the area.  If you want to mobilize people to protest against shale gas, glysophate spraying, harvesting of timber in perceived sensitive areas, etc. there are lots of very engaged folks.

If you want to develop mineral resources, re-evaluate forest products-related opportunities, develop the maple syrup cluster or just about any other economic opportunity, who is leading the charge?   I don’t know of any public sector or private sector groups that are working on economic development in the county.

So economic development becomes – wait until someone comes along with a project and then determine if you are going to support it.

I think Albert County needs more proactive economic development but, again, if a large share of the population is retired or closing in on retirement – will there be an interest?  I also compared employment by occupation in 1996 and 2016.  The relative share of the workforce employed in occupations related to education; law and social; community and government services has increased by 144% and the number working in health occupations is up by 31%.  The share working in manufacturing-related occupations is down 49% and the share working in trades and transportation is down 16%.

An older workforce much more heavily employed in the public sector.  What will be the appetite to restart albertite mining?  Not that I am suggesting that albertite has a future but I would certainly like to a) see some organization evaluating economic development opportunities out there and b) an engagement with the public in the region about the importance of economic development and their potential role.

It’s the same debate playing out all over New Brunswick.  Everyone wants high quality public services and public infrastructure but few are tying that to economic development.  I can tell you this.  If there were 1,000 people living in Albert County that were working in export-based service industries that required broadband telecommunications there would be far more government appetite to make the necessary infrastructure investment.

In fact, when I was in government, I had argued this should be a deliberate strategy.  Determine the share of the population in broadband under-serviced areas who would be interested in working a job from home that required broadband and then go and pitch that workforce to the many business services providers and other remote worker employers in the province.

I didn’t get much traction.

In the end all regions of New Brunswick and Atlantic Canada should have local/regional economic development efforts focused on the area’s assets and attributes.

Not all areas will grow at the same rate.

Some will continue to shed population.

But all, I believe, at least deserve an honest effort to develop local economic opportunities.