Using the Labour Force Survey we have some data on the impact of Covid-19 on the labour market situation by male/female in New Brunswick.  I’m using unadjusted data because I am comparing the year-over-year numbers.

Women working part time took the brunt of the hit.  Between last year and this there was a 36% decline in the number of women working part time.  On an absolute basis the decline was 13,700 compare to a drop of only 4,300 men (in general, men work less part time than women).  Only a relatively small number of full time working women lost their jobs (relative to men or part time workers).  The good news is that these part time workers should have been eligible for the CERB which would have mostly covered lost income.  Young female part time employment among those between the age of 15 and 30 declined by 44% year-over-year.  Again, hopefully the incentive programs helped here.  Young male part time workers saw less of a decline but full time working men under 30 have an unemployment rate pushing 25%. 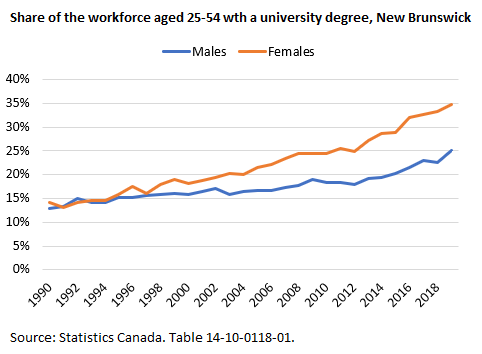 In general, pre-Covid-19, men have a much higher unemployment rate and are much more likely to be employed seasonally as are women.  Look at the average annual Employment Insurance claims over the past five years in February and in August by gender.  In February there are nearly double the amount of men who are EI beneficiaries compared to women.  In August the number of beneficiaries is almost the same.

Richard Saillant talks about the de-industrialization of the economy.  That tends to hit men the hardest.  Sectors such as mining, manufacturing, other natural resources development tend to employ far more men than women.

This isn’t a defence of men.  Males still earn far more than women across all higher income cohorts (although there has been good progress in recent years with women accounting for 61% of the growth over the past decade among those aged 25-44 earning more than $75,000/year).

The other major factor, of course, is the growing gap between women in the workforce.  There is a much higher share of women working part time than men and in industries that aren’t particularly high wage.  So this could be women working a part time job to round out the family income.

Finally, there is more to it than just employment.  Women tend to still bear a larger share of child rearing duties so working women with kids punted out of school places more of a burden on them.  And as offices and stores reopen, the challenge of younger children will be an issue.  Employers should be flexible.

In the end Covid-19 is hitting everyone hard.  Understanding how it is impacting various segments of the workforce is important.