I know long time readers will be getting tired of my variations on the “if you build it, they will come” theme from the great baseball movie Field of Dreams but I still think this concept underlies a lot of economic development theory – like the chicken versus the egg debate – what comes first?

A few years ago I was talking with a client in Cape Breton and mentioned I thought they were going to have to attract a lot more people in the coming years if the economy was to grow.  I suspect some people thought I was off my rocker.  How can we possibly be talking about attracting people to Cape Breton when a) we have unemployment at 17% and continued out-migration of young people every year?

But I was looking at the fundamentals.

When we think about the workforce these days we need to be laser focused on the number actively looking for work and not some larger number that includes those who say they are looking for work (the status required to collect EI) but are really not.

Secondly, the workforce was aging – again just like everywhere else.

That’s why I said the region would need to staring bringing in significant numbers of workers in the coming years, and entrepreneurs, and investors, international PSE students, etc.

So what is going on in Cape Breton?

First, a definition. For most of the data below I am talking about the Cape Breton RGM or the Census Agglomeration area.  There is Cape Breton Island but that is a large geographic area nearly twice the size of Prince Edward Island so we will keep the discussion to the urban region. 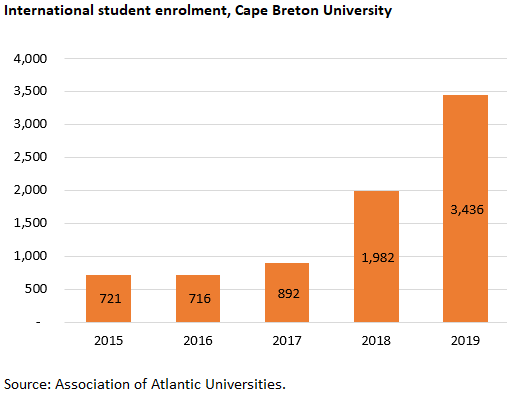 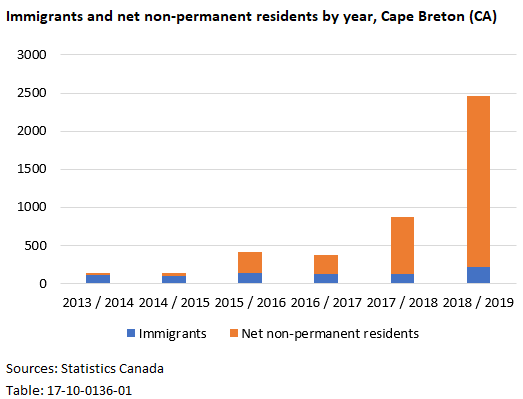 What does that look like comparatively?  The Cape Breton CA has gone from well below average in terms of annual inflow of immigrants and non permanent residents to well above average.  Adjusted for population size, Cape Breton attracted 244 immigrants and non permanent residents per 10,000 population in 2019 (or a 2.44% rate) which was well above everywhere else in Atlantic Canada by a wide margin, except the gold standard, Charlottetown. 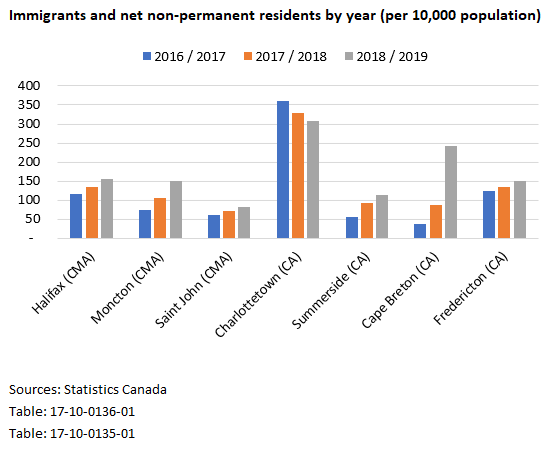 And it just might be impacting in a positive way the labour market. After a decade of mostly declines in total employment across the urban region, employment has been rising again in the past year. 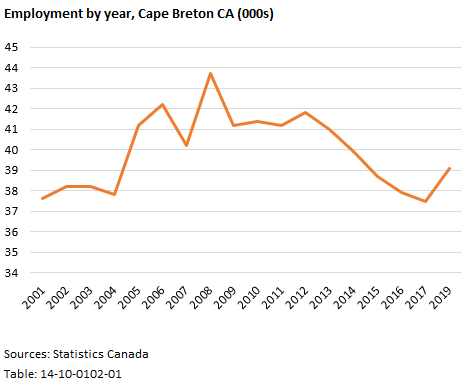 Of course this will lead to the inevitable “they won’t stay”, “they are only coming to get into Canada”, “why do we need more university students”, yadda, yadda, yadda.

But I ask you what is the downside?

Worst case scenario most of them leave but some stay (win).

Best case many of them stay and help grow the economy, population, K-12 school population, workforce, base of entrepreneurs, etc. (win-win-win).

We’ll have someone on the Growing Pains podcast soon to discuss what is happening in Cape Breton and efforts to retain this vast new population.

1 thought on “The Great Cape Breton Experiment: If they come, will you be able to build it?”