I first heard Don Mills discussing public opinion in Atlantic Canada in the very early 1990s.  His firm, from which he kind of retired in 2018, Corporate Research Associates, was a constant surveyor of public opinion in the region for four decades.  There are few, if any, in Atlantic Canada, that understand the people of this region more than Don.  These days he is playing an advocacy role promoting a common sense approach to economic development, population growth and the provision of public services.  He writes a column in multiple newspapers, is asked to public speak across the region and advises government on related issues.

So we were thrilled to have him on the Growing Pains podcast this week to talk about Covid-19, urban hubs and other subjects.

We hope you can carve out an hour to listen to the show. Matt and I also touch on a few other economic development themes including the role of universities in New Brunswick.  This, as I told Matt, is really just a New Brunswick issue.  PEI and NL universities have witnessed significant growth in post-secondary enrollments particularly international students.

GDP is probably not the best measure when thinking about universities but it should make you stop and think.  In 1997, 20 years ago, New Brunswick ranked mid-pack about the 10 provinces in Canada for GDP per capita from the universities sector. Now the province ranks last and by a wide margin. Just 20 years ago New Brunswick’s GDP per capita from the halls of higher learning was 17% higher than Manitoba and now it is 15% lower.  The GDP from universities on the Rock was 26% higher in 1997 and now it is 62% higher. 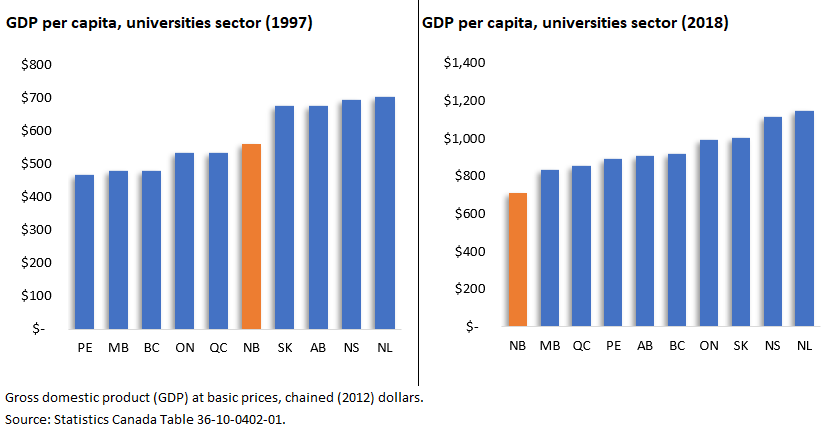 Don’t forget to send in ideas for the show and people you would like us to bring on the podcast.