I was unaware until today that Statistics Canada publishes estimates of population by year between Census periods for municipalities – large and small.  I thought the agency only published population estimates for CMAs, CAs and for Census Divisions.  Yet, up pops this data when I was searching through the Stats Can database earlier today.

So, as a caveat, realize these are between Census population estimates and subject to revision but having said that, here are the growing and declining cities, towns, etc. in New Brunswick with a minimum of 5,000 population.  It is interesting to see that Shediac has dethroned Dieppe since 2016 for population growth.  Until recently, when it came to population growth, it was Mayor Lapierre’s world and we were all just bystanders.  But Shediac has elbowed its way into the fastest growing city/town club by attracting retirees, professionals and others who want to be near a metro area and near the water.

In fairness to Moncton Mayor Don Arnold, the hub city added the most population of any city in the province – growing by 3,750 between 2016 and 2019 -95% more than Dieppe but growth rates are a percentage change and on that measure Shediac and Dieppe have a commanding lead.

Freddy Beach is growing strongly – what’s new?  The capital city has been chugging along now for years.  The fact that the Moncton, Lincoln and Douglas LSDs are growing strongly will continue to ensure Jean-Guy Finn will keep a bottle of Tums at his side.  Why not?  You get proximity to the urban core with a fraction of the property tax bill.  Eventually a government – someday – will bring some sanity to this issue. 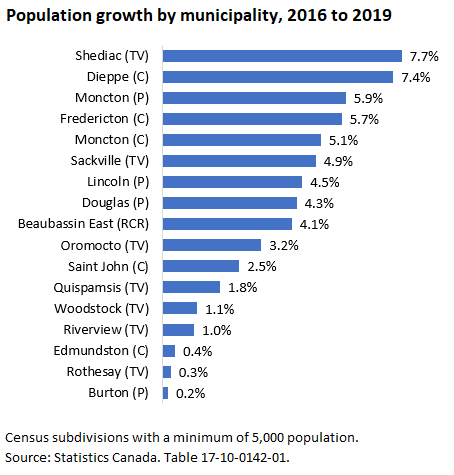 On the losing side of the ledger, Grand Falls has lost nearly 4% of its population since 2016.   Campbellton has shed population.  Shippigan, not shown here because it has slightly less than 5,000 population, has also lost 4% of its population.  Caraquet is down 3%.  The whole Peninsula is struggling but I hear there is a new impetus to attract new population to this important part of the province.  Giddy up.

A couple of really cool municipalities in the Saint John orbit have shed a modest amount of population since 2016. This will turn around when the Saint John CMA gets back to stronger GDP growth. 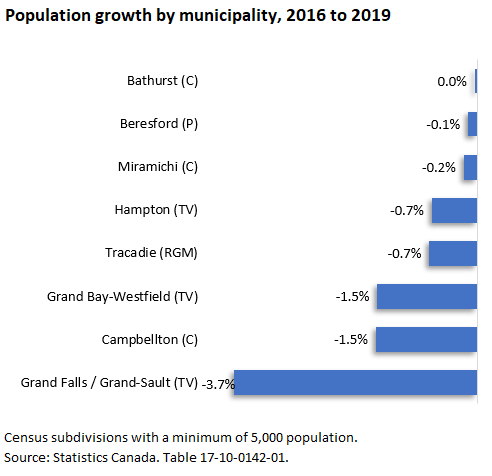