I was on the team that attracted UPS to New Brunswick 25 years ago.  I wrote the proposal/business case arguing there would be significant cost and technology benefits from consolidating 13 operations into one customer service/back office operations.  The VP we were working with told me he slept with that proposal under his pillow.   We had code names for all the companies we were working with to ensure no information leaks – the code name for the UPS project was ‘Australia’ – the opposite of UP is down = down under = Australia.  It could have been worse, I won’t tell you what the code name was for Air Canada.

Enough with the nostalgia.

UPS has been downsizing its operations.  At one point they had 1,000 workers in New Brunswick. I’m not sure how many they had in Moncton but it looks like they are closing Moncton with the 168 layoffs announced this week.  Twenty-five years and somewhere in the range of $500 million spent in payroll alone – it’s been a pretty good run.  That $500 million turned into $800 million worth of provincial GDP and well over $100 million in tax revenue for government.

So the loss of UPS is a big blow but not a fatal blow.  The last numbers I looked at showed customer service/back office employment in Greater Moncton at around 7,000 (just those with export-focused operations) and this was before TD.  So assuming it is at least marginally larger than when I last looked at the data, it is still at least approximately a $500 million per year export industry for the regional economy.  Export meaning money coming in from outside the province to pay the wages, real estate, supply chain and other costs in New Brunswick.

But as was pointed out by multiple folks in recent days in the media and on Twitter, there is no doubt the workforce for this sector is tightening and demand is great.  When we did the workforce strategy for the sector in 2018 we estimated it would need at least 1,000 workers per year from attrition and new growth through 2022.  It wasn’t entirely clear where those workers were going to come from but we were hopeful new immigrants from existing back office sectors in India, etc. could be attracted.

The good news is the Moncton CMA just added more population last year than any year in history and the total workforce expanded strongly in the past couple of years mostly due to immigration. The community just needs to ensure the folks moving in have the skills, aptitude and interest to work in the jobs on offer. 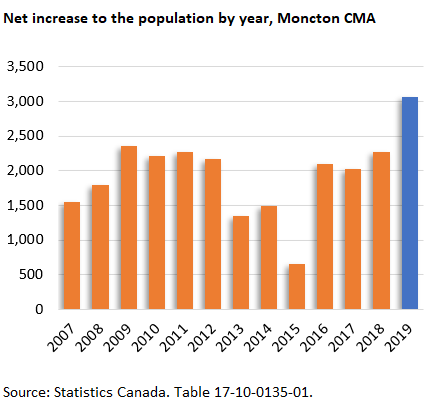 1 thought on “What does the UPS closing tell us about the Moncton economy and labour market?”