Australia announced a few weeks ago they would be planting billions of new trees to aid in the fight against climate change.  Greta tells us to plant trees to help fight climate change. Don’t pretend you don’t know who I mean when I say Greta. Trees are back, baby (shout out to Kojak).  Paper bags, utensils and a host of other wood fibre-based products are replacing plastic. Wood is being used more in construction – even as the core structure of multi-storey buildings.

Guess what?  This is an area where New Brunswick excels.  When most of North America was cutting down its trees to develop agriculture, we kept most of our forest land.  A UNB forester told me the reason for this was the soil, topography, weather and other factors which made New Brunswick a tougher location for agriculture (with some exceptions).  Regardless, we have lots of forest land and forests are back.

Australia is not planting billions of new trees to let them stand in perpetuity.  They are clear the goal is to use trees as a carbon sink until they reach maturity and then harvest them for use as wood and paper products, energy, etc.   This strategy is being deployed more and more and is en vogue – not as a replacement for a reduction in fossil fuels use but running in parallel.

New Brunswick generates relatively more GDP (as a share of the total) from our forests than any other province in Canada well above British Columbia in second place. 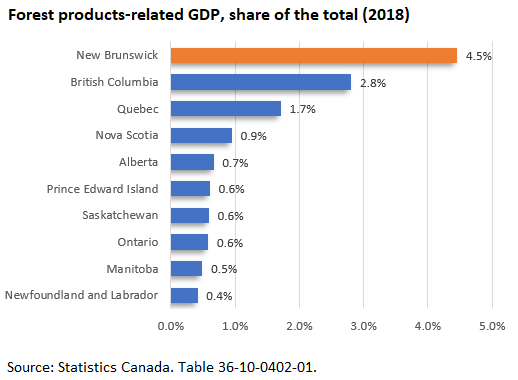 But after a number of years of solid growth, in the past couple of years the GDP contribution has started to decline slightly again. This could be for a variety of factors including market conditions, but we need to keep a close eye on this.  As the rest of the world leans in to using forests as both an economic driver and a tool to address environmental challenges (climate change, plastics, etc.) we shouldn’t be backing off in New Brunswick. 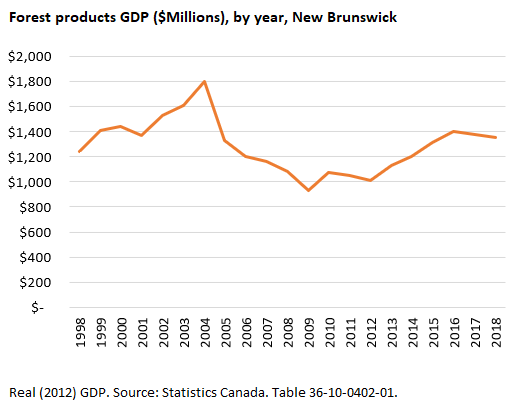 The problem, of course, is that even as the use of forests is becoming recognized as a better way to address many of the planet’s challenges, an increasing number of us aren’t particularly thrilled with the practice of cutting down trees.

There are growing protests – and I suspect more coming – against tree harvesting.  These folks will breeze by harvested farmland in their cars without a second thought but if they catch a glimpse of harvested timberland, they see it as an outrage.  They will use very pejorative words like ‘rape’ and ‘pillage’ and talk about the devestation to widelife, etc.

Would they rather we cut down all the trees as most other jurisdictions have and create vest farmland?  What about the devastation to wildlife then?

Of course we need to set aside a share of the old growth forest and protect it.  We have significant land already protected in this way. And when looking at forestry and logging we have to consider broader impacts – of course – but in any given year only about 1% of our trees are cut down across the province.  With replenishment rates this means at any given time the vast majority of our land mass is forested – early growth, mid life and mature trees.

But if we collectively get it in our heads that we want to reduce the cut, put far more stringent regulations on the industry and just, in general, vilify those who work in the industry, we will lose investment and further economic activity for the province  – some are suggesting we already are.

I stand as one who applauds the industry.  This doesn’t mean I agree with every decision or practice.  It means I realize the economic value of the industry – the thousands of real jobs bringing in more than two billion dollars worth of export revenue each year.

The good news is that investment levels seem to be keeping up.  Our share of national capital investment in wood and paper manufacturing is still running above our share of national GDP, although I wouldn’t necessarily write home to mother about it as the average annual CAPEX in the past three years has been $186 million per year (this doesn’t include repair expenditures which tend to run around $100 million per year but the data has been suppressed in the past three years). 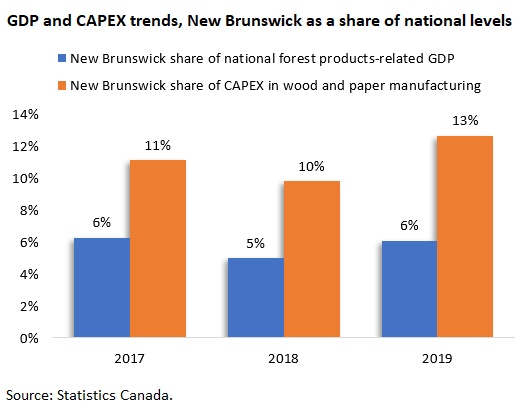 As a cautionary tale, Nova Scotia’s CAPEX in wood and paper manufacturing has dropped to only an average of $37 million per year over the past three years. I would expect the GDP contribution from the industry to decline further after the recent plant closure.  The GDP contribution from forest products in Nova Scotia is already 75% less than it is in New Brunswick. As a share of the total economy, forest products in Nova Scotia is 80% below New Brunswick.

So hug a forester.  Government types – elected and overseers – keep in mind the potential of this industry as you make decisions.  Our federal government is also looking to plant billions of new trees.  Plant a few here, too.