After World War 2, Canada was settling some 1.5 million European refugees and the Prime Minister at the time asked the Premier how many did New Brunswick want?  An article I read a few years ago said the Premier told the PM he wanted ‘none’ because we have a high unemployment problem already. The truth is that immigration from Europe after the war powered two generations of growth across Canada and for the most part the provinces that attracted the most immigrants also grew the fastest.  We have no idea what might have happened if New Brunswick had attracted 50,000 or 100,000 of those immigrants (we did attract a few, ask former UNB head Dr. McLaughlin about the engineers that came here fleeing Soviet communism and their early work on GIS at UNB).

What we can say for sure is that immigrants are now changing the trajectory of the New Brunswick population, labour market and economy.

The latest population data from Statistics Canada at the sub provincial level confirms this.  The following charts (and table) show the population growth between 2018 and 2019 for the CMA and CA areas in New Brunswick and selected others.  Note, for those of you who are starting to take a real interest in this stuff, the population figures here are for July 1 2019 compared to the same month in the previous year so don’t compare these figures directly to the IRCC immigration figures for all of 2019.

The Moncton CMA population continues to grow strongly up 2% in 2019 second only to Halifax in Atlantic Canada and in the top quintile among the 150+ urban centres across Canada. Fredericton had another strong year.  Saint John’s population increased again as did Bathurst, Miramichi and Edmundston. 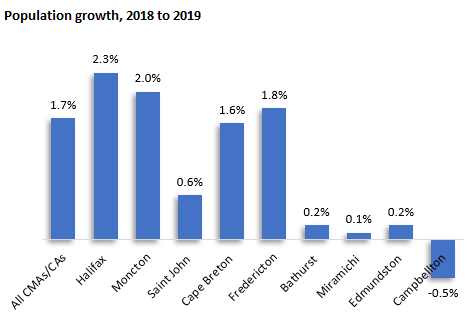 The big story, of course, is immigration, The Moncton CMA attracted a record 1,728 immigrants but also 629 net non-permanent residents for a total of 2,357 immigrants/non-permanent residents added to the population (this doesn’t include students). This is double the amount from just two years ago and it is leading to a significant increase in housing being built across the CMA (and more needed), hence my oblique reference to Keven Costner’s Field of Dreams in the title. For prospective clients out there I might point out that I was part of the team that developed the 2014 immigration strategy for Greater Moncton (and the updated strategy last year).  And for those who were worried about the community’s ability to hit the 1,900 immigrant target by 2020, it was already surpassed in 2019 at 1,915 (according to IRCC data).

Fredericton continues to have the highest immigration rate in the province at 124 per 10,000 population in 2019.  Moncton was 111 and Saint John 69.  However, the loss of population to interprovincial migration is the reason why Fredericton’s overall population growth was not as fast as Moncton. 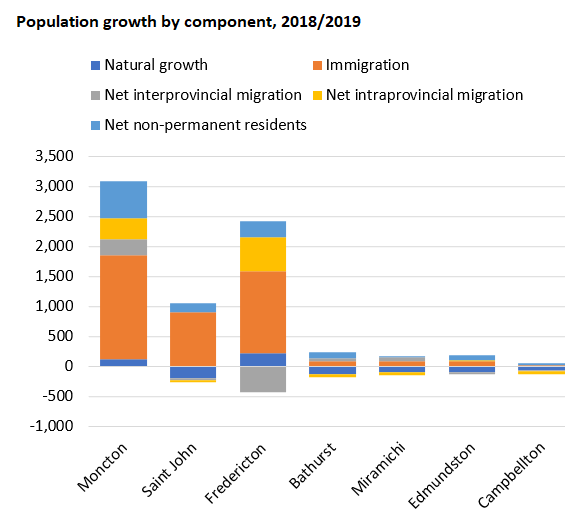