When I started writing It’s the Economy, Stupid! back in 2004 (the name was suggested by David Jonah and was taken from Bill Clinton aide James Carville who concluded if the economy was going strong it would cover many political shortfalls), the focus was primarily on how we convince companies and entrepreneurs to invest in New Brunswick, along with, I’ll admit, more political commentary than I provide today.  While population trends were starting to be a concern in 2004 we still had a surplus of young people coming through the education system relative to those retiring each year.  That year there were 118 people aged 5-19 in the province for every 100 aged 55-69. 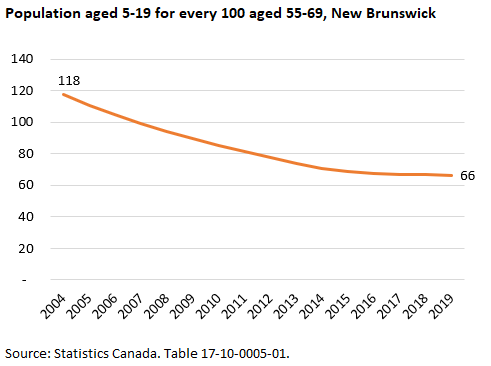 In the intervening years that has completely flipped and then some.  We now only have 66 young people 5-19 for every 100 aged 55-69 -not nearly enough to replace those leaving the labour market even with the big increase in immigration in the past few years.  In fact the reason why the ratio is stabilizing somewhat around 66 per 100 is that we have injected thousands of younger immigrants into the mix in the past few years.

In the April 2018 I wrote a column in the Telegraph-Journal where I speculated that efforts to attract industry to the province could end up not having the impact we were expecting if those new companies just raid workers from other firms and there is no additional workforce to backfill the empty positions.  At the time we had already witnessed a 50% increase in the number of job vacancies around the province.

Anyway I took friendly fire for that column.  Several people that I admire severely criticized what I wrote that day.  It’s one thing to have trolls and pompous drive-by critics complain about something I write. However, when experts and peers start with the sharp criticism – it may be time to pause.

And so I did.  I stopped writing the column in April 2018.  And I took some time to reflect.  The truth is I was right in substance with that column although maybe I could have used a few pointers on style.

After a year and a half or so, I am back in the TJ column business.  I will be writing periodically – at least once a month.

My column last Saturday was a type of trial balloon.  Essentially I argued that while we have lots of ‘challenges’, New Brunswick should be a place of great opportunity.  The biggest barrier to our growth was the shrinking workforce and now we have proven that people will move here and stay here (never mind that 50% retention rate you read about recently, that was before we figured out that we should be trying to attract people that have a specific economic opportunity here rather than just skilled immigrants that can’t find work aligned with their skills and interests).  I’m not sure what the ultimate immigrant retention rate will be but I would guess we will be in the 70-80% retention soon enough.

Beyond the workforce, what is holding us back?  We have safe, uncongested urban centres with relatively low cost of housing and short commute times.  We have smaller towns and rural areas that would love to see more people move in.  We have lots of natural resources and potential to develop more.  We have an underdeveloped tourism industry.  Sure we can list all our challenges (and I listed many in the column on Saturday) but are they really big enough to stop our growth?

My fundamental concern is this.  I need mayors, Councillors, leaders at universities and colleges, MLAs, Premier (s), business leaders, economic developers – focused on what we need to do to get the economy back to a sustained level of growth. If all our public conversation is consumed with small potatoes stuff we will miss out on an age of opportunity.

I think the next 20 years in New Brunswick could be our most prosperous yet.  I really believe it.

We flow in thousands of ambitious immigrants mixing with the thousands of young people already here and moving into their careers.  We encourage a new generation of entrepreneurs to emerge.  We foster a culture of economic development from Edmundston to Lameque to Sackville and St. Stephen where we are shining the light on economic opportunities big and small.  We get some momentum and presto – New Brunswick is back in business.

All your natural instincts will be to criticize this.  But resist the temptation.

Help me figure out how we get there.  Moaning and complaining about old people or health care or NIMBYism or urban/rural or LSDs or anything else is not where we should be putting our intellectual horsepower.

Let’s get to solutions.

I have heard from nearly two dozen people about that column last Saturday including a bunch of older folks at church on Sunday.  Most of the feedback has been positive.

I think a lot of New Brunswickers would like to turn the page.

Let’s work together to move this province forward.

1 thought on “Are we on the cusp of a new era of prosperity in New Brunswick?”