Several people asked me to comment on the good jobs report out of Statistics Canada this week. New Brunswick added 5,300 jobs (the workforce expanded by 3,100) in January 2020 compared to January 2019.  As I always say these numbers move around but the direction of travel is certainly encouraging.  In January 2017, on a seasonally adjusted basis, there were 385,300 active in the labour market.  By January 2020 that rose to 390,100.  Again, not rocket-propelled growth but positive.  We are still not back to the size of the labour market back in 2009. 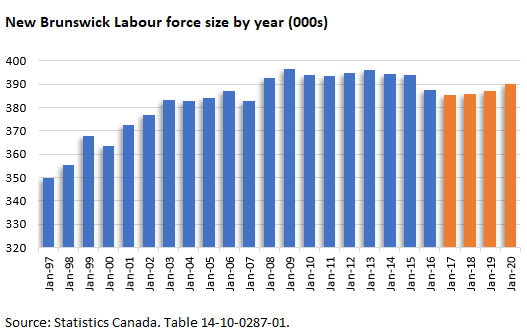 It’s hard not to see the correlation between the growth in the immigrant workforce and the growth in the overall workforce. Between January 2017 and January 2020 the immigrant workforce increased by 7,200. The overall workforce increased by 4,800.  Now we have to use caution here because the immigrant numbers are based on a three-month moving average and are unadjusted for seasonality but when you compare year-over-year this isn’t as big a factor as January seasonality is fairly consistent from year to year.

Still there is some distinct inevitability there.  The workforce that was born in Canada in New Brunswick is shrinking.  If we want to arrest the decline – and, dare we dream!, grow it – we will need to attract more newcomers.

So the next time you meet a newcomer to the province, give them a hug or shake their hand  – tell them you are glad they chose our province. 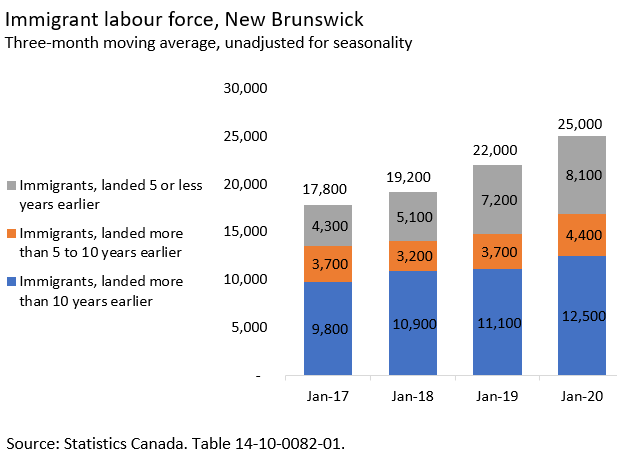