I was in Saint-Quentin this weekend talking to the maple syrup folks about workforce issues.  I was impressed.  The village looks like a going concern.

At a superficial level, Saint-Quentin doesn’t have a lot of fundamentals working in its favour.  It is 40 minutes off the TCH.  It is more than an hour’s drive from the nearest urban centre (Edmundston).  It has a median age at the time of the Census of 48.6 years.  And by my favourite demographic metric – they are in trouble – there are only 64 people under the age of 20 for every 100 over the age of 60.

But the population increased in both the town and the parish between the 2011 and 2016 Census and the number of businesses increased by seven percent between 2014 and 2019.  Using Statistics Canada’s Business Counts data, there are now 31 maple syrup producers (with employees) up from 24 in 2014.  There are more firms in the forestry sector as well. There have been modest increases in the number of firms in many service industries too.  It looks like there are more options for seniors looking to remain in the community.

The reason why Saint-Quentin is a going concern is that it has a core, export-focused economy unlike many other similarly sized rural communities.  There are now 1.4 million maple taps across Restigouche County and the forest products industry remains relatively strong.  Across the town and the parish there are more than 800 people employed in agriculture (mostly maple) and manufacturing – or 43% of the total workforce (Census data).

I think there is likely more opportunity in Saint-Quentin but again I worry there isn’t a lot of capacity in the town to develop those opportunities.  There is almost no accommodation capacity even as the town is the closest to Mt. Carleton.  There should be more tourism opportunities in the area (beyond snowmobiling) – I saw four moose driving across from Bathurst – we have whale watching – how about moose watching? (mostly kidding with this one).

And in terms of local services, the town is sufficiently far from urbanity that there should be opportunities to build a business case for attracting more.  If enough residents have to commute an hour out to Edmundston – there could be a local opportunity (sorry, Cyrille!).

And, of course, the biggest challenge of all is the need to attract workers. Don’t let the nominal unemployment rate fool you.  From the Census we know that 40 percent of everyone living in the village who earned employment income in 2015 also reported receiving EI benefits. In the parish that jumps to over 50%. 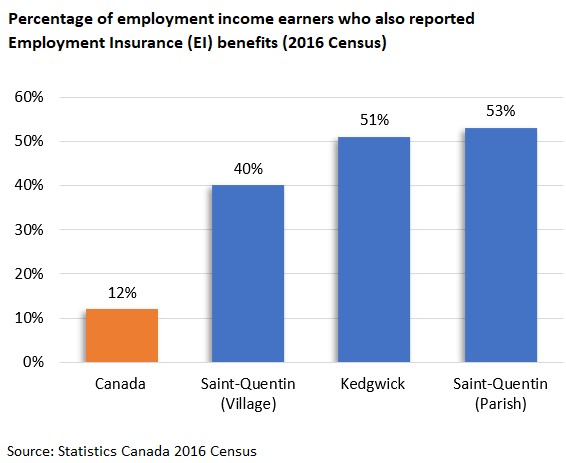 Across the Saint-Quentin town and parish – 97% of everyone living there is at least a third generation Canadian.  Suffice it to say there haven’t been many immigrants to the area for generations.  But there is work being done now – immigrants are coming.  I didn’t get a chance to discuss this with anyone but I am hopeful the area can attract enough workers to meet labour market demand.

So, for smaller communities across New Brunswick – what can we learn from Saint-Quentin?

1. To be successful most communities need an export-based economy – that can include services such as tourism but there needs to be money flowing in to circulate in the local economy;

2. You need to ensure there are enough workers to meet the demands of local industry – a lack of which can and will kill a local economy (this includes new entrepreneurs to replace those who are retiring);

3. You need entrepreneurs – folks who spot opportunities and are willing to take the risk to act on those opportunities.

3. You need to be actively identifying opportunities for investment in the community and pitching them to prospective entrepreneurs – don’t wait and hope they will figure it out themselves.