Given the closure of the smelter in Belledune and Northern Pulp in Pictou County, I thought I  would provide a few thoughts on what should be done in these situations.  What is the right response from community and from government?

The first thing is to realize what was lost.  In the case of both the smelter and the pulp mill what was lost was tens of millions of dollars worth of export revenue each year. The goal, then, should be to think about how to replace that $70 million – $100 million in lost export revenue. I am not talking about the firms’ sales – in this context I am talking about the amount of revenue that directly flows into the province in the form of wages and supply chain spending and how that multiplies in the community.

If we don’t keep this in the window as the main issue, we may end up with the wrong policy response.

Take the issue of entrepreneurship.  One of the usual responses is to give anyone that wants to start a business some funding to help transition them from the stable job at the factory to self-employment.  However, if you had 5 hairdressers in your community before the closure and you give taxpayer funds to help 5 more to start up – even as $70 million – $100 million in spending disappears – all you are doing is fostering more small firms competing for a shrinking base of business.  Encouraging local service-based startups is not a particularly good policy response.  If the start up firms are export-focused or import substitution focused that is a different story.

The Government of Nova Scotia is proposing to spend $50 million to help support the impacted communities and workers.  Again, this won’t even cover one year of lost revenue to the region.

Are there other large firms that could replace the one that is closing.  In other words, is the firm closing because of firm-level factors or industry-level factors?  Glencore has multiple smelters around the world, it obviously decided smelting in Belledune didn’t fit the plan but maybe some other firm would be different.  The challenge is that Glencore has no particular interest in selling the facilities to a competitor – no matter how remote.  But there is a public interest here that needs to be in play.  If those facilities have economic value and if another player could come in and give that community back hundreds of high paying jobs – we need to pursue this.

On a similar issue, if the firm leaves but the resource they were adding value to remains, we need to look for other export-focused firms to leverage that resource.  Northern Pulp is closing but the wood they were processing will still be there.  Nutrien closed its Sussex potash mine but that doesn’t exclude the opportunity that another firm might want a crack at that resource. In other words, the firm is gone but the resource remains.

Again, note my comment above about the difference between firm-level reasons and industry-level reasons. If it is fundamentally uncompetitive to operate a mine in Sussex or a mill in Pictou or a smelter in Belledune or a potash mine in Sussex, then so be it.  Government should not structurally subsidize firms with bad business models. But I am not convinced that we do a good enough job trying to replace the $70 million – $100 million in lost export revenue.  It is easier to dole it out in small chunks to local groups and feel good about ourselves.

Forget this.  Go out and find a large, global firm that could transform the resource into value profitably and encourage them to set up in the community. That is a better use of any monies.

I have heard that at least one group of investors is interested in the Belledune smelter.  I hope the government is working hard on this.  Glencore won’t have much interest – although if they can get some value out of their assets I would hope they would at least consider it.

Miramichi is an interesting example. It lost several forest products mills in the 1990s and first decade of the 2000s and it’s economy didn’t collapse.  Again, think of my mantra above.  The reason it didn’t collapse was because a significant number of workers went out west and actually earned more money – most of which was spent back in New Brunswick and the federal government put large – paper mill-sized payroll centre in the community (look at what happened to employment in Miramichi after the payroll centre in the chart below).  Both of those are textbook examples of ‘export revenue’.  The money flows into the community from Alberta and from Ottawa. Unfortunately it is not possible to replace every lost mill or mine with a 400-500 person government facility. 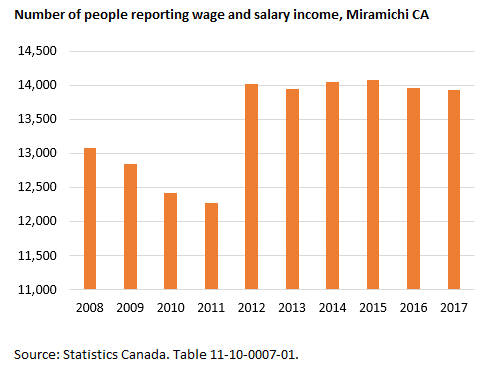 Finally, there will be many cases where the large mill or mine or manufacturing facility is gone for good.  Even so, the focus must still be on trying to replace the lost export revenue.   100 small projects = 1 large project.  Maybe a focus on other sectors such as tourism, agriculture, other natural resources development, etc. could reap results (although many of these alternatives do not pay the relatively high wages of the previous employer).

We can give up, of course.  That is an option.  Just not one that reflects a lot of ambition.

1 thought on “We’ve just lost our largest employer. Now what do we do?”