There has been a lot of good media coverage about the  recent population growth spurt in New Brunswick.  This is good news, no doubt, but it also reveals the extent of our challenge.

In the 1970s we actually didn’t need to grow the population particularly fast.  There were so many young people and women entering the workforce that we were in a surplus position and many ended up ‘goin’ down the road’.  Now, we have relatively few young people (compared to older) and the participation rate among younger women is equal and in some age cohorts higher than men.

Consider the less covered recent release by Statistics Canada on job vacancies which continue to rise and are up 34 percent in the third quarter of 2019 compared to the third quarter of 2015.   The Job Vacancy survey does show an increase in payroll employees in recent years (good news) but the Labour Force Survey shows the total workforce in the province shrunk again year over year in November. 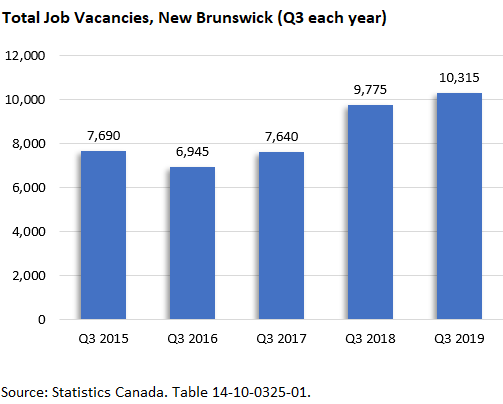 So, this means we can’t rest on this modest population growth rate.  We need to double down.  Attract more young people and young families here.  Repopulate our K-12 education system and get demography moving in the right direction.

It can be done.