In preparation for the big workforce summit next week I have been crunching a ton of labour force data.  If you haven’t registered for the summit, I think it is closed but you might try to find a way as it is going to be informative and fun (if you think labour market data is fun, that is).

Statistics Canada asks people in the monthly Labour Force Survey why they left their jobs.  They ask the unemployed (or those not active in the workforce but who had left a job in the past 12 months) for the reason they left the job during the previous year.  I took a look at the answers going all the way back to the 1970s to see if there were any interesting trends.

At first I looked at the October data (i.e October 2019, 2009, 1999, etc.) to ensure a consistent month over the years but I changed my mind and went with the average monthly data for each year just to ensure there wasn’t anything wonky going on in a specific month (this is the unadjusted LFS data for New Brunswick).

There are some interesting trends in the data.  First, the size of the labour force ballooned in the late 1970s and 1980s (at least by NB standards) rising 21 percent over the decade.  The next two decades it expanded by roughly the same growth rate but in the past decade, the labour force has shrunk (as I have been reporting on these pages for years).

There are two broad categories of why people left their jobs – they voluntarily left or they were let go.  Among those who voluntarily left, there has been an ongoing decline – which may seem counter-intuitive for those who worry about the feckless Millennials. In an average month in 2018, 2,700 said they left their job in the past 12 months because they were ‘dissatisified’ down from 3,400 in 2018 and 3,900 back in 1988.

The most interesting data relates to the job losers.  There has been a steady decline in the number and share of persons getting permanently laid off from a high of nearly 53,000 in an average month in 1998 (again note the definition – the reason they left a job in the past 12 months) to only 29,500 in 2018.  This is a steep decline (44 percent in the past 20 years and points to both economic and demographic factors).  The bottom line is that people are far less likely to be laid off now then they were in previous decades – although I wonder about Employment Insurance in here – because the ‘temporary layoff’ numbers seem low given the high EI rate which always clouds New Brunswick’s labour market picture.

The number that haven’t worked at all in the past year is rising steadily – likely due to the aging workforce.  In an average month in 2018 there were 188,900 folks who said they didn’t work at all in the previous 12 months. 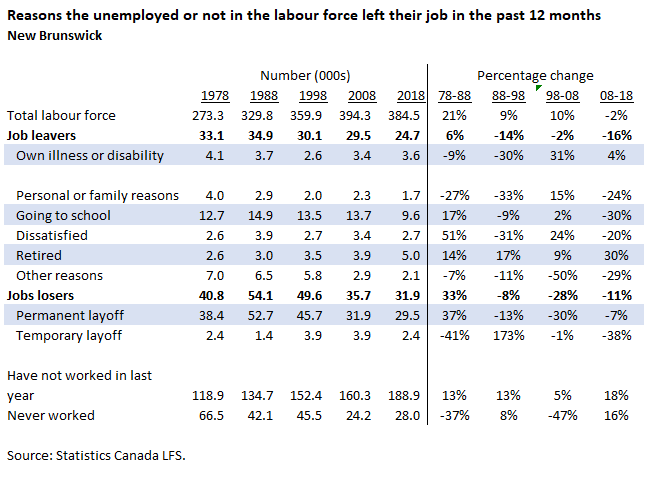 Of course it wouldn’t be an It’s the Economy, Stupid! blog without comparing the data to other jurisdictions.  The following chart shows the percentage change from 2008 to 2018 in the total number of people leaving their job in the past 12 months by reason.  I wanted to use the absolute number change (rather than the change in the percentage breakdown) because I am interested in the effects of the strong growth in the national workforce over the decade (up nearly 20 percent).

The national data is fairly similar to the New Brunswick data with a few interesting variances.  First, there has been a significantly lower decline in the number leaving a job to go to school nationally compared to New Brunswick (down 7 percent compared to down 30 percent in New Brunswick) – I suspect this has to do with the significant increase in younger immigrants moving to Canada over the decade (and other factors).

Second the number leaving because they retired expanded faster than in New Brunswick.   We know lots of people are retiring, we just need to make sure there are enough folks to take their place in the workforce and ensure there are enough to meet the growing demand of certain industries.

The big increase in the number nationally who have never worked is interesting.  I’m not sure why this number is expanding. 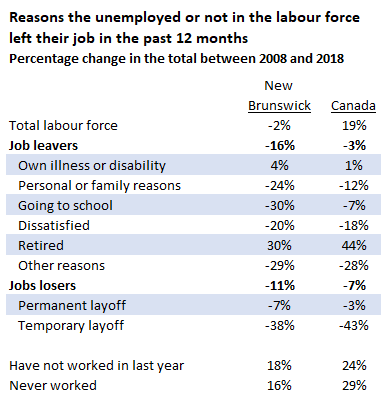