Canada’s Defence Minister, Harjit Sajjan, got this one right.

On Saturday, Canada’s grumpy coach/commentator Don Cherry, lamented the lack of people wearing poppies and went on to make a snarky comment about immigrants.

Of course this led to the now obligatory calling out of Cherry on social media – each denunciation more louder than the last – he should be sanctioned – he should be fired – he should be investigated for hate speech – and many with colourful language – and to be clear not just us regular Joes and Janes.  Many top journalists and commentators felt obliged to take down the man in pithy tweets.  Poor Ron MacLean – his facial features studied with great granularity and I see now that he has come out with a mea culpa moment – again obligatory in the woke world – he may not survive this.

I was disappointed with the general response.  Sure, Don Cherry – old Grapes – who has carefully constructed his grumpy – tell it to ’em straight brand for more than 50 years – needs to be called out for this silly comment but what this really should have been about is the sentiment behind the statement and it should have induced a conversation.  This is why Sajjan got it right. 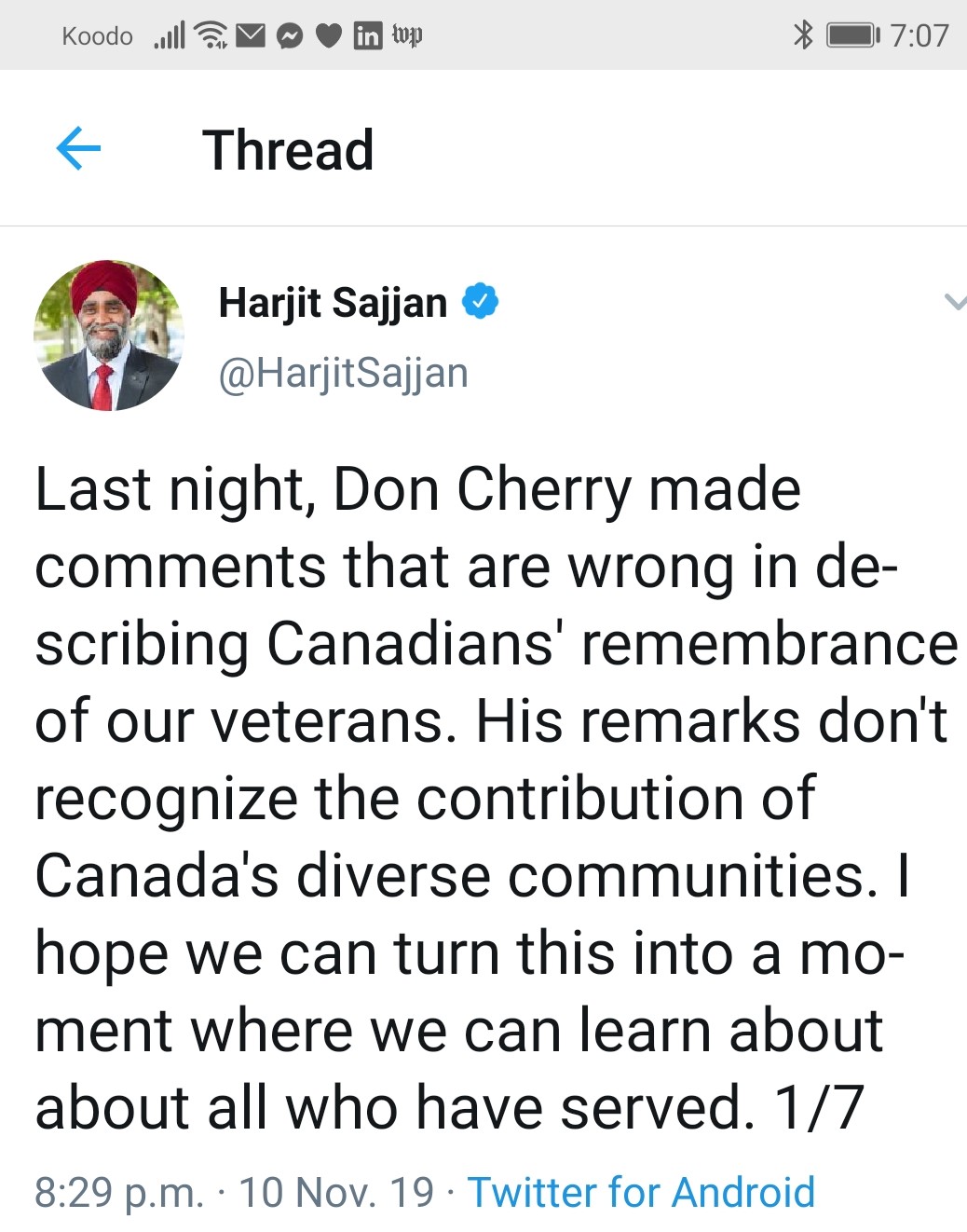 It is important to talk with newcomers about important symbols and why they matter so much to many (most) Canadians.   Many will embrace these symbols and some will not – just like all the rest of us – those living here weeks and those whose families have been here for generations.  This is Canada, this is an open and free place – over the years I have heard several Canadians denounce poppies as a symbol of war and death that should not be part of our culture.  I would suggest they are in the tiny minority but they exist (just do a quick search on Twitter now if you don’t believe me).

I spoke at the pre-conference during Pathways to Prosperity recently and proposed the radical idea that not everyone with questions about immigration is a racist.  That is not to suggest there are no racists but I am of the opinion that most Canadians are decent and open people but that some have questions about why we need to attract immigrants, what are the reasons people move here, will they ‘take our jobs’, how will they impact our ‘culture’, etc.

I say bring on these questions. If people suppress them for fear of being shamed in our woke world or if they retrench back into cloisters of like minded, this will only hurt our broader objective of fostering an open and tolerant society that welcomes newcomers and realizes their importance to our future as a country.

So, back to Sour Grapes.

He is well-loved by millions of Canadians.  I fear this becomes another George Bush “you are either with us or against us” moment.  If you still like Cherry now after this you must be a racist.

I believe you can still like Don Cherry and not be a racist and I don’t care if I get named and shamed for this view.  A bully is a bully.  If you are trying to get Canadians to keep quiet for fear of being shamed, you might feel good but you will not move society forward.

If Don has questions about immigration, let’s have a conversation.   The folks at CBC (SportsNet?, TSN?) should use this as a teachable moment.  Maybe Don could start doing a few spots on the Punjabi version of Hockey Night in Canada.  He might find they are just as passionate about hockey as he is – and they may even like Dougie Gilmour.

I hope we didn’t miss a moment here.