I was chatting with a colleague recently about seasonal industries and the seasonal workforce in New Brunswick.  There are various data sources for this.  We can use the unadjusted Labour Force Survey data to compare the highest employment month to the lowest (around 20,000 or 6ish percent).  We can also use the reasons for leaving jobs data from the LFS – permanent layoff, temporary layoff, etc.  Neither of these are particularly satisfying because they don’t get at the root of seasonality within industry.  We can use the Census to help us understand who works part year but a lot of time this is by choice and not because of the seasonality of industry.  In fact, using this measure New Brunswick has about the same share of the workforce working ‘part year’ as the rest of Canada.

The Canada Employment Insurance Commission has it’s own definition of seasonal industries – in the context of EI – but doesn’t (at least recently) publish the data on a provincial level. You can read the full 545 page report here but don’t expect a lot of granular data at the provincial – let alone sub-provincial level

For me the issue is what do you want the information for?  Increasingly we want to know how many people in a community are unavailable for work because they are employed seasonally.  This is becoming a very important data point because we have many communities with ‘high’ unemployment but with employers that are struggling to find workers.

The problem is that both from an LFS perspective and an EI perspective, seasonal workers are supposed to be ready and willing to work.  People on EI have to show they are actively seeking work to keep getting their EI cheques.

What I have said all along is that we should end this fiction.  Every one of the 40,000 or so people in New Brunswick (I don’t know the real number, this number was in an EI Commission report from a few years ago) who are waiting until their job starts up again next ‘season’ – should be carved out of the unemployment data.  If government wants to change the EI program – in legislation and practice – it can do that but otherwise we need to end the fiction there are thousands of NBers unemployed and seeking work at any given time.  There are some certainly – but many business owners around New Brunswick will tell you they have never seen such a tight labour market – even as there are still many people nominally unemployed.

From the Census we have data on how many people who collected employment income also collected EI income in 2015 – as one proxy for the EI usage situation in New Brunswick.  I have published this data before on these pages.

Across New Brunswick, there were 424,000 people who indicated on the Census they earned employment income in 2015 and 101,000 that collected Employment Insurance payments or about 24 percent of the total.  Now that is not the ‘seasonal’ unemployment rate because many presumably were only unemployed as a result of other factors and, a few thousands received EI because of having a baby – not to confuse the issue further.

Compared to the national figure, EI usage is 92 percent higher in New Brunswick which is a first level indicator of the high seasonal unemployment.  If we had the national rate of EI usage, that would mean that 49,000 less people in New Brunswick would have received EI income in 2015.  This is pretty close to my estimate above of 40,000.

The following table shows the highest 10 and the lowest 10 across the province.  What this means is that at some point during the year 65 percent of everyone living in Bas-Caraquet who was working also collected EI income.  So, if things were synchronized the community would have had an unemployment rate of 65 percent.

By contrast, only New Maryland had a working population where less than 10 percent collected EI income. 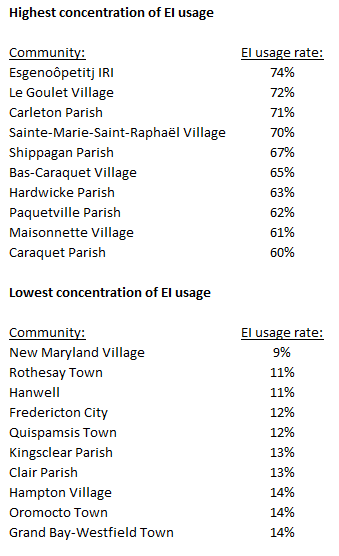 So what do we learn from this data? First, the ‘seasonal’ workforce is much larger than 6 percent – it is closer to 10 percent to 12 percent.  Second, it is somewhat concentrated in parts of New Brunswick making it harder to really change without seriously impacting specific communities in a very negative way.

So back to my original point.

If you don’t want to change the EI system, then ring fence it and work with employers around the province who need to find workers.  Don’t proceed with the fiction.  If there are over 500 people in Neguac who stop working at some point during the year or over 50 percent of all workers in the community and the local Subway restaurant can’t find sandwich artists – either a) change the EI program or b) help the local employer figure out another solution as sandwich artists represent a strategically important part of the workforce (this is meant for my son who recently started in this role in Fredericton).

I’d like a new unemployment statistic.  The number of people in a community who are a) unemployed, b) actively seeking employment and c) willing to take anything on offer until something more aligned with their skills and interests comes along.

I wonder what that unemployment rate would be?