Herb Emery offers another insightful column today questioning why we haven’t seen much growth in ICT (information and communications technology) GDP despite all the hype.  He contrasts New Brunswick with Nova Scotia and PEI and doesn’t find a favourable trend.

One of the obstacles in analyzing the ICT industry is the ‘C’ which accounts for at least 65 percent of total ICT GDP.  The ‘C’ is communications – or telecommunications – which is mostly a local service (your phone, cell phone, etc.) so that very large component is basically correlated to general population growth (and the industry’s ability to sell us more and more services, my ‘phone’ bill now is $355/month and includes a landline, high speed Internet and it seems 5,000 TV channels on demand.

But even with telecommunications removed, IT GDP growth in New Brunswick has been very weak in recent years.

Compared to Nova Scotia New Brunswick has a much larger IT trade deficit (NB has 49 cents worth of IT exports for every $1.00 of IT imports compared to 60 cents in Nova Scotia). 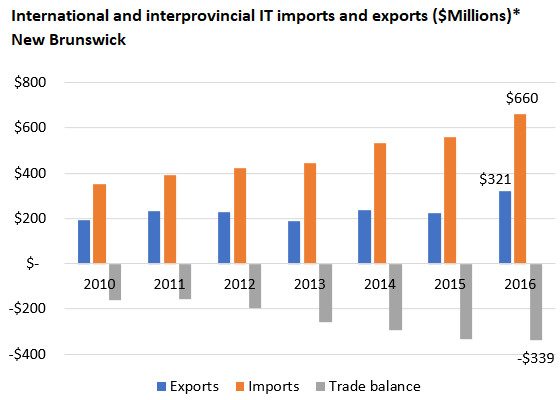 This shows you the complexity of economic development.  Even the IT industry is highly trade exposed.  Strong growth in IT exports that doesn’t outpace the growth in IT imports will still lead to weak IT GDP growth – and all the economic value that comes from that (high wage jobs, income, taxes, consumer spending, etc.).

What’s the right response?  Well if we had the capacity to properly analyze our economy, we would try and figure out what is actually in that $660 million worth of IT imports and see if there is any potential for a) NB firms to address that market opportunity or b) attract national and international firms to do the work here.  Please note I am not suggesting we offer subsidies to IT firms to do the work here.  I’m just suggesting if we knew what was in the $660 million (or the $300 million increase since 2010) we would at least have the right data for a potential response.

Because of the rising IT wages in New Brunswick and the tightening IT labour market it may now be cheaper to import IT services than to use local suppliers.  If, and I emphasize if, that is the case, wouldn’t you like to know?

By the way, a friend of mine recently noticed the Rogers installation guy’s truck had an Ontario license plate so he asked the guy about it.  Rogers hired a team of installers from Ontario to come down to the region to do the work.

If there aren’t enough local workers to do basic cable and Internet installs, that should make us stop and think.