The debate about capitalism has been continuous since the days of Adam Smith but every few decades it comes to a head.  In the late 19th Century, capitalists like Carnegie argued they needed protection from British companies to create home grown national champions which lead to the emergence of the Robber Barons.   In the 1930s, FDR took a run at the billionaires and when told he was a traitor to his class he responded he was all that was standing between them and the masses (Communism was en vogue).  In the 1960s and 1970s, there arose an outcry over the sclerotic capitalism controlled by megafirms, unions and special interests.  Everyone was comfy and there was a move to break this by reducing regulation, freeing trade, breaking up state monopolies and therefore unleashing the creative potential of the economy.

Now we are back in one of these cycles.  The talk of breaking up big tech monopolies, curtailing finance, taxing the rich at much higher rates and injecting more state control over the direction of the economy is gaining traction.

The Economist covered Elizabeth Warren’s version in its latest edition and their broad conclusion invoked a rebuke from Mariana Mazzucato, an economist leader of this new movement.  I have attached her tweet below for your viewing pleasure.  I am quite sympathetic to Mazzucato’s views but the idea that she is being ‘objective’ while The Economist is being ‘ideological’ is kind of fun.  She is a main driver of a massive ideological shift but to her it is just objectivity.  I would suspect the Economist believes it is being objective too. 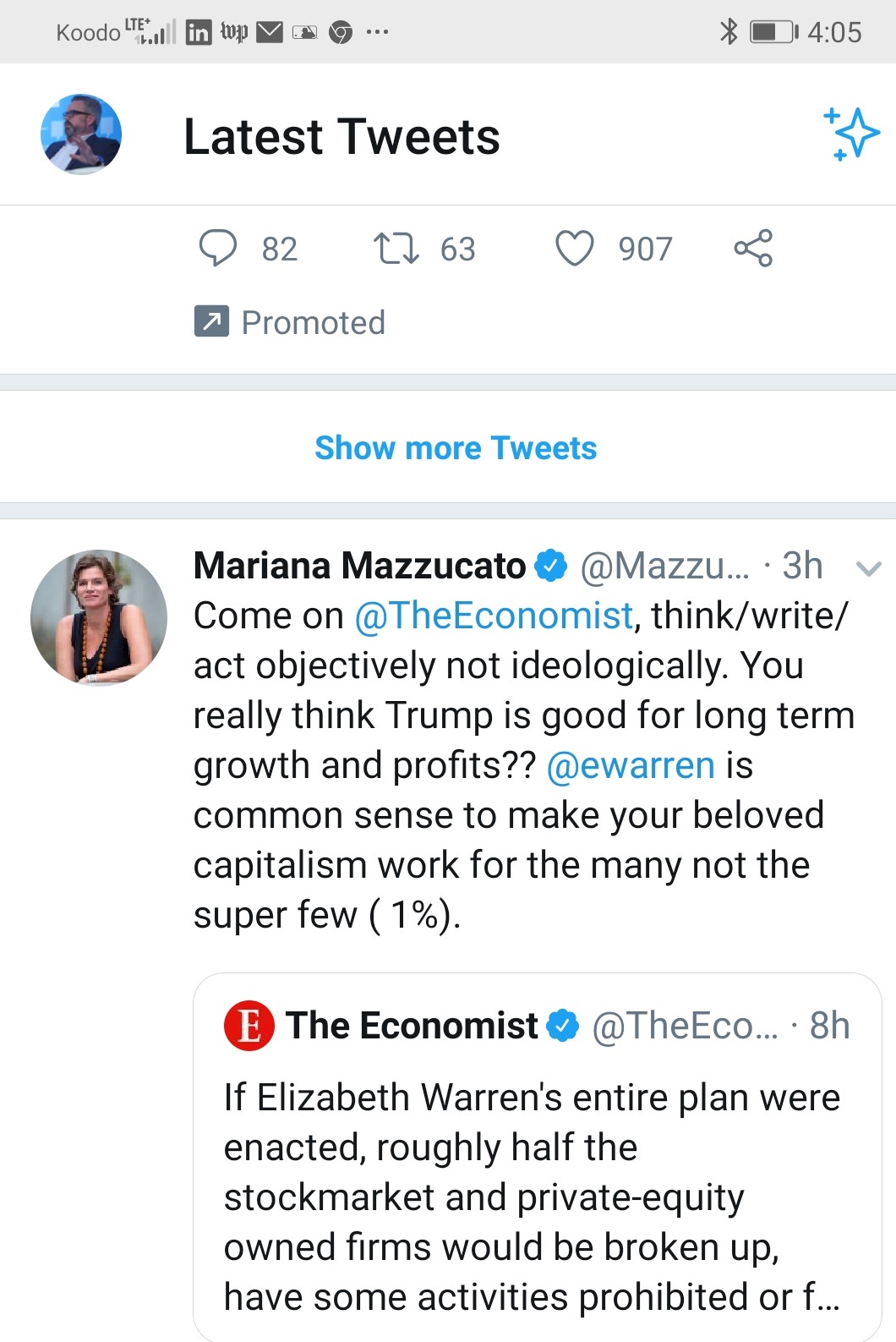 I’m sitting in New Brunswick trying to figure out how to attract more immigrant farmers, determine what is the right role for government to foster resources development, and engaging in the conversation about urban development.  All small potatoes, of course, in the big picture.

But it strikes me that small places like New Brunswick are mostly innovation takers and not innovation makers. What I mean by this is that global trends related to finance, trade and industrial policy will impact us but we have little say.  Technology trends such as AI and robotics will come here but we are not making it (leading it), we will have to take it for good and bad.  This is not to say we can’t be innovation makers in areas where we have some leadership such as forestry development, fisheries, etc. but for the most part the big thinkers and their output will impact us whether we like it or not.

My main view on this is that we can’t get focused too much on these big battles.  They are interesting but we have to focus on what we can control.  In 20 years there may be no need for drivers for our trucks, taxis, etc.  But we can’t just wait and hope that is the way to alleviate the driver shortage.  AI might eliminate the need for customer service representatives but right now, we need hundreds and hundreds more each year just to keep that $1.5 billion industry thriving.

As for the potential shift in the interaction between the state and capitalism, again we can look for some made in New Brunswick solutions but we are mostly subject to broader forces and we will need to steer into the skid.

So focus on the main thing and the main thing right now in New Brunswick, Atlantic Canada, etc. is ensuring strong economic foundation so we can maintain high quality and sustainable public services. This will mean a 15-20 year push to attract migrants, efforts to encourage a new generation of entrepreneurship and investment in sectors where there is (or could be) a strong value proposition.

As for the rest of it?  Winter is coming.