After we presented the new immigration strategy to Moncton Council earlier this week I received several messages and emails from folks around the region and beyond.  Their questions revolved basically around three issues: 1) Why do we need more immigrants (my kids have moved to Toronto)? 2) Why should we spend so much taxpayer money trying to attract and retain immigrants and 3) Am I not worried about cultural compatibility?

Let me address the three in order:

1. Why do we need more immigrants?  Primarily because among those born in Canada there are now more people retiring each year than joining the labour market.  This is happening across Canada.  The difference is simple. Across Canada the born-in-Canada population participating in the labour market (working or looking for work) has dropped by around 65,000 between 2013 and 2018.  The immigrant population participating in the labour market has increased by nearly 800,000.  Across New Brunswick we have witnessed a rise in the number of immigrants joining the workforce but not nearly enough to offset those leaving it.

Why do we need to grow the workforce?  There is a high correlation between economic growth and workforce growth.  There may be a point in the future when this changes through technological innovation and productivity but for now if you want to grow your economy you need the horsepower (human power) to do it.

Why do we need economic growth? Shouldn’t we learn to live with it?  It’s certainly possible.  New Brunswick has lived with very weak economic growth for over a decade but tax rates have been increased and federal transfer payment growth has compensated.  Annual federal transfers have risen by $500 million in just the past four years.  I guess we could keep raising tax rates and expect the feds to pump in even more money (we are now at almost $13,000 per household in health and social transfers and Equalization).  Ideally we (New Brunswick) would have an economy growing at 2-3% per year and that would help foster a strong fiscal foundation for the provision of high quality public services and infrastructure.

So maybe you buy my argument that we need more young people to grow the workforce and boost the economy leading to organic tax revenue growth so that we don’t have to soak existing taxpayers for even more tax revenue (currently provincial government spending is running at around 26% relative to GDP).

But you wonder about the prickly issue of our kids leaving the region? Why do we need immigrants when our young people continue to leave?

First of all, I feel your pain.  Two of my kids have left and are living in Ontario (one in Fredericton).  But I take comfort in the data (lol).  As shown in the chart below the Moncton CMA loses on average around 4,700 people to outward migration within Canada (elsewhere in the province or other provinces) – every year.  That is a non-trivial three percent of the population gone every single year.  We don’t have great data on who is leaving but it includes recent high school graduates leaving to attend university, people getting promoted out of the region (an historical challenge for the Moncton CMA and many smaller urban areas, and immigrants leaving expecting greener pastures elsewhere.

We do know where they are moving to, at least to the large urban areas.  The top CMA for outbound migrants from the Moncton CMA over the past six years has been Halifax. In an average year 330 Greater Monctonians move to Halifax.  Toronto is the second main destination (225 per year) followed by Saint John (212),  Ottawa (177) and Edmonton (173).

It is important to point out that as immigrant numbers have been rising in recent years the total number leaving the Moncton CMA has been going down, not up. 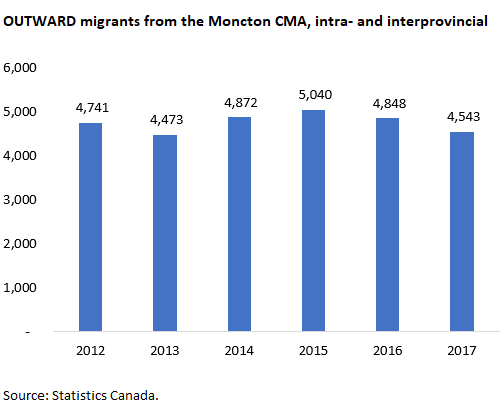 Why am I not panicking? Because this migration is normal.  The mobility of labour is considered one of Canada’s strengths.  Toronto the Great has a negative migration rate every year but it makes up for it by attracting 90,000 immigrants or so.

There are many reasons why people would want to leave a community – the key it so make sure for every one that leaves you have more than one moving in. And that is exactly what is happening in the Moncton CMA.

Oh, BTW, you also want your community to be an excellent place to live – if people leave because they didn’t like the community at all – rather than for economic or other reasons – that is a fail.

In the past six years the Moncton CMA has attracted an average of over 5,300 per year from elsewhere in Canada, and this excludes immigration – which is on the rise.  Where are they coming from?  Saint John is the top source with an average of 292 per year – yes lots of folks move between Saint John and Moncton (both ways). Halifax, Toronto and Montreal are the other top sources of inward population migration.

So, on a net basis, from migration within Canada the Moncton CMA population has risen by 600 per year going back to 2012, again excluding immigration which has been rising too. 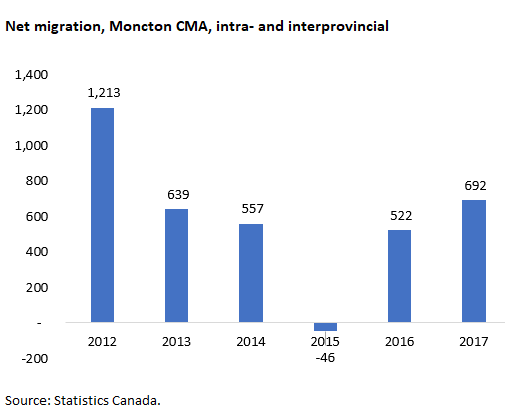 In conclusion, don’t fret too much about people leaving.  I expect at least one, maybe two of my kids to move back some day just like the thousands moving here each year.

2) Why should we spend so much taxpayer money trying to attract and retain immigrants?  This one has a fairly easy answer.  I don’t know the exact amount government spends to attract and settle newcomers from outside Canada but I do know that for economic migrants it represents only a few thousand dollars per year per person.  They will make this up in less than a year in the form of the taxes they pay – sales tax, income tax, property tax, etc.  The ROI on attracting immigrants into the workforce is very good.  Refugees cost  more tax dollars to integrate but we have a moral responsibility to help the global flow of refugees – we just shouldn’t conflate economic migrants with refugees.

3) Am I not worried about cultural compatibility?  This one doesn’t really have a data-focused response because I don’t know how you would define this.  I can’t even define ‘Canadian values’ and I suspect if you asked 100 Canadians you would get variations of 100 different answers.  I think tolerance has been a Canadian value – i.e. I may not agree with you but I agree you have the right to think the way you do and we shouldn’t discriminate against each other in public sphere because of different viewpoints.  This seems to be slipping a bit – tolerance for some seems to be equivalent to you must agree with me on every issue – which, of course, is the opposite of tolerance. The Economist had a good article not that long ago about the tricky line between liberalism and illiberalism.

I think volunteerism and support for related activities could be a core value (defining characteristic?).  If you have kids in minor sports, you feel an obligation to volunteer.  If you attend a church likewise, etc.  I think volunteerism is an important cultural attribute and it is not shared in all countries.  In some places when it comes to ‘third-sector’ activity, the view is “that is the role of government” and in other countries there just isn’t a culture of volunteerism.

Anyway, we want newcomers to buy-in to this project we call Canada.  In my experience, the immigrants I interact with not only buy-in, many of them are even more enthusiastic about it.  If you talk to newcomers I think you will find that one of the things that attracted them here was the culture.

In the end all I ask is that you think about this issue – immigration – from a fact-based perspective.   If we want strong communities, high quality public services, economic opportunities for our kids, etc.  I think the case is strong that attracting new population will be required.