If you were to ask other Canadians what were the defining characteristics of New Brunswick they would probably say things like maple syrup, salmon, lots of trees, maybe lobsters.  One of the most unique attributes of New Brunswick, however – maybe the most – is our bilingualism (the share of the population that speaks French and English) and the commitment to bilingualism in general.  It would not be hard to argue that any other province was committed to bilingualism as is New Brunswick.  There are lots of bilingual folks in Quebec – but there is no commitment in that province to ensure government publications, signs, etc. are available in both languages.

One of the things that has concerned me for a long time – and I have written about it many times – is the relatively tiny language industries sector in the province.  Logically you would think that with the large demand within the province for translation and interpretation that we would require a relatively large workforce and, you would think, that we would be positioning this specialized workforce to export services across Canada and beyond to places that need French-English language services (i.e. a lot of documentation across Canada- public sector and private sector – is published in both English and French).

The facts are quite grim.  As shown in the chart below, we have fewer people working as translators, terminologists or interpreters (NOC 5125) than Manitoba.  Almost half as many as Alberta and just a tiny fraction of the number in Ontario and Quebec.  In fact, there are only 2.1% of all workers across Canada in this occupational group in New Brunswick – less than all sectors combined.  And now I see the data on age and 44% of all our translators et. al. are over the age of 55.  Not only do we have relatively few translators in New Brunswick nearly half of them will be retiring in the near future.  In Quebec only 33% are over the age of 55 and in Manitoba only 23%.  Manitoba has a younger and larger language industries workforce. 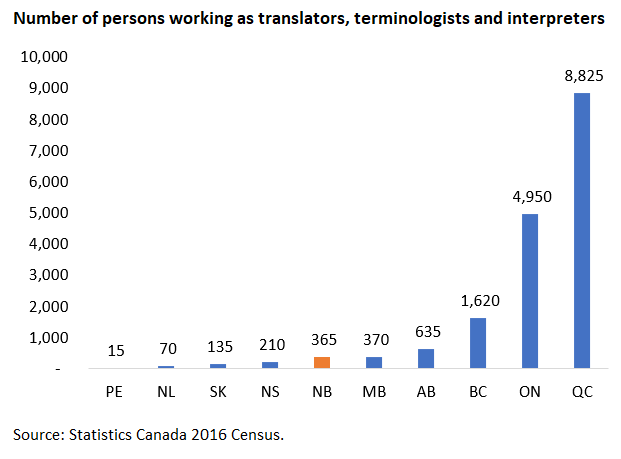 When I worked in government, I also found out the provincial government has to outsource some of its document translation work to other provinces because at peak times we don’t even have enough translators here to handle in-province demand.  Imagine that.  The only officially bilingual province and we don’t have enough translators to meet in-province demand.

I have argued before that one of the problems is a lack of firms in this industry with scale.  There are 60 registered firms (with CRA) that have no formal employment and only two with five or more employees (as of December 2018).  In fact, as shown in the chart, even Nova Scotia has more translation and interpretation services firms with five or more employees. Manitoba has six.  Quebec, 52. 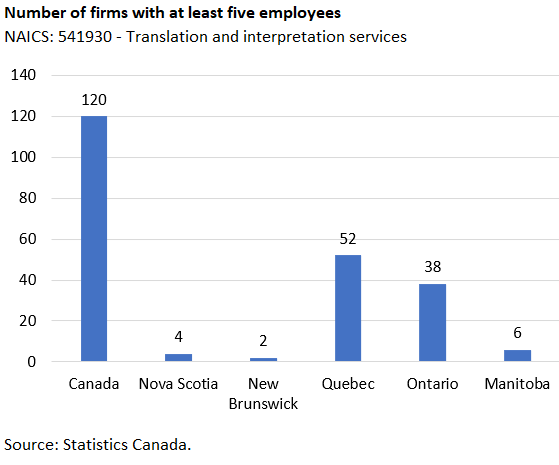 Somebody should start to take this sector seriously.  Questions to be asked include:

Why are nearly half the workers in the sector over 55?  What is the plan to build up the younger workforce or are we destined to import even more of these services from other provinces?

Why are there almost no translation firms with scale?  The largest has between 50-99 employees (must be Lionbridge in Moncton?).  Can we do more to encourage tie ups?  Instead of focusing 100% of our efforts on tech startups can’t we carve a little time for other sectors?  We need a few ambitious entrepreneurs to step up and take advantage of the graduates coming out of UdeM, the research capacity, the in-province market for these services, etc. to build capacity and export these services across Canada and beyond.

In a way it’s a comfortable world for the translation sector.  There is too much demand for their services in New Brunswick so why even bother to think about exporting?

Unfortunately this means we are just not taking advantage of a natural attribute of the province.  It would be like if we only produced potatoes for local use or we only fished enough lobsters for local demand.  Why would we do this?

Let’s triple the number of translators graduating from PSE each year.  Let’s go out and try to find some ambitious entrepreneurs that want to buy up a few of the smaller firms and build one with the scale to take on national and international markets and let’s encourage ACOA, ONB and all the other many government agencies that are involved in export development to take this sector seriously.

For those with knowledge of the sector, you are going to tell me about new technologies, and margins being squeezed, and that we lose our bright you graduates because they can make more as translators for the federal government in Ottawa.  Yadda. Yadda. Yadda.

We haven’t really tried this, have we?   So why not try.  Canada’s only officially bilingual province should at least try to have a decently sized translation and interpretation industry.

2 thoughts on “How do you say “lost opportunity” in French?”