One of my main preoccupations these days is the need for communities and governments to ‘think small’ when it comes to economic development planning.  From proactively attracting tourism operators to developing language industries, I think we could have several hundred interesting economic development initiatives underway in every corner of New Brunswick engaging a mix of businesses, government and engaged volunteers in efforts to develop the economy.

The normal response to this is that we need to ‘focus’.  We can’t have people running off in all directions or we will fragment efforts and achieve nothing.  As I have argued many times it is not the size of the opportunity but the relative effort to get it done.  If it takes a couple of phone calls to attract an Amazon fulfillment centre – and a couple of hundred jobs – why would we snub our noses because we are too busy elsewhere?  This, BTW, may not be a good example as I suspect there are people working on this.

After my talk in Edmonton recently I chatted with a guy who was the only economic development officer in a large but sparsely populated region in a northern area in a western province.  He was frustrated because it was only him and he was being pulled in all directions and didn’t have time to work on ‘opportunities’.

After about a 20 minute conversation I had teased out of him over a half dozen interesting opportunities in tourism, agriculture and natural resources that could be developed in his area.  So, why not?  It might take another person, a few seed dollars and an effort to engage local business and community leaders but if your goal is economic development, why not?   You can wait a long time in the hope that your few large employers expand or you can take matters into your own hands.

When I was with the Jobs Board I was impressed with the success of the maple syrup industry in northwestern New Brunswick.  In a meeting I innocently asked department officials “were there not maple trees elsewhere in New Brunswick?   I was given a map showing a huge concentration of maple trees in Albert County.

The following chart shows where the maple syrup farms are located in New Brunswick by county.  The caveat is they have to be large enough to have formal employees – people paid to work.  There are a lot of hobby maple operations around the province but I am interested in those with the scale to produce enough product to make a living and hopefully sell into export markets.

As you can see, there are 53 operations in Restigouche and Madawaska and one in Albert County (this is taken from Canadian Business Patterns in 2018). 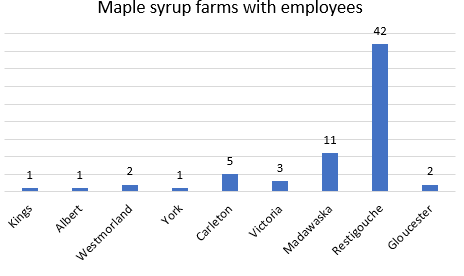 Now, let’s look at the operations that have at least five employees.  There are 22 in Restigouche and Madawaska and none in Albert County. 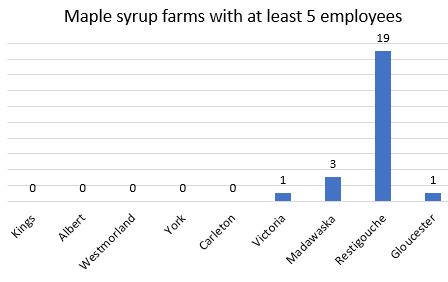 So, I have been in conversation with some folks who live in Albert County.  They are vehemently opposed to fracking, they dislike cutting down trees and they are uncomfortable with aquaculture.  Maple syrup?  That doesn’t seen to arouse any derision and even generates some interest.

I don’t know much about maple syrup.  I know that far more of the land in Albert County is not Crown Land so that changes the development dynamic.  However, why wouldn’t private land owners be interested?  Not just for a hobby but for something of scale that could generate significant income?

If we could replicate the success in the northeast, maybe we get another $30 million industry.

I estimate there are something like 500 people working in the maple syrup industry in New Brunswick (excluding indirect and induced effects).  Pumping $30 million worth of economy activity into Albert County would be an important driver of new economic activity.

Now, before you send emails or comments suggesting that I don’t know what I am talking about, save your digital ink.  I agree.  All I am asking for is people that do know what they are talking about to give this idea (and many others) a serious look and then decide.

If we don’t have enough entrepreneurs in Albert County willing to take this on, why not encourage the northeastern firms to come down?  They can communicate in the international language of economic opportunity.

Finally, I’ll make a point about scale.  Quebec is the largest producer by far and they have 28 firms with at least 20 employees, and three with more than 100 employees.  Across New Brunswick we have only one with between 20-49 employees and none larger (according to Stats Can).  Like so many other industries, we need to think about how to achieve scale – either through consolidation or some kind of joint effort.  We don’t necessarily need one large firm with 200 or more employees (although maybe this would be a good idea).  Scale brings better ability to market products, make capital investment, drive productivity (drones?), invest in employee training, recruit international workers for the harvest, etc.

Now, take this approach and apply it to the other 99 opportunities out there from Miscou Island to St. Stephen.