The negative health effects arising from asbestos started to become known in the 1920s.  By the 1970s the dangers were widely known and its use was phased out – it was banned just about everywhere by the 1990s.

And yet, asbestos mining continued in Quebec for another 20 years.  The last mines were closed only eight years ago and even then, the Quebec government had offered a $58 million loan to keep asbestos mining going but the Parti Québécois promised in an election to stop it.

Asbestos, Quebec is a town with about 7,000 people or about 0.08 percent of the province’s population and, yet, the government continued to support the industry for decades after most of the world realized the product was toxic.

The Asbestos example is instructive.  To save a few hundred jobs in a small town, Quebec was prepared to defy the scientific consensus for decades.

Of course there is no equivalency between oil and gas and asbestos.  Oil and gas has been and continues to be the dominant source of energy that drives the global economy. Once identified as a problem, asbestos was easily substituted by other materials.

But asbestos in Quebec is one small example of the ‘skin in the game’ problem associated with the goal of reducing carbon emissions.  The jurisdictions fighting the hardest to reduce the use of fossil fuels tend to be those with no oil and gas industry and those most uncomfortable with it tend to be those with a relatively large domestic oil and gas industry. We can’t just ignore this.

I’m not singling out Quebec specifically, of course.  This applies to all jurisdictions around the world.

If you think Toronto has the highest share of people earning $150,000 or more you would be wrong. Again, with Asbestos, Quebec in mind, we can’t just remove this from our calculus. 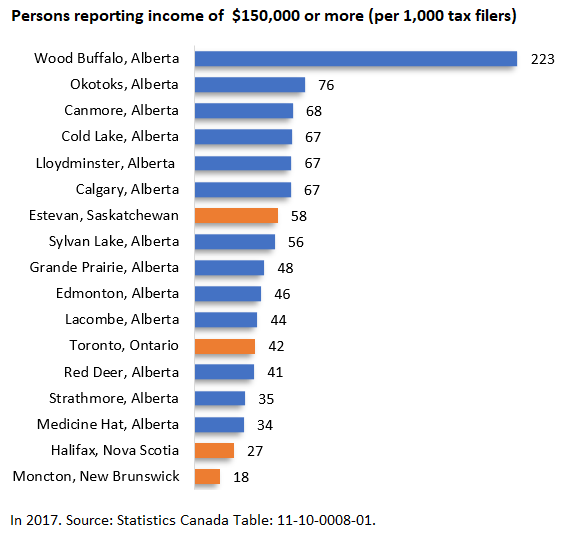 To be honest, I don’t even like writing about this subject.  I have family, friends and social media connections across the spectrum from climate change skeptics – to those who believe it is a problem but that Canada is too small to make a difference – to those who believe we should cease all oil and gas production tomorrow even if it brings the economy to a grinding halt.  No matter what I write on this subject I will always offend at least someone.

Nevertheless, I will weigh in here with my thoughts on how to move forward with a plan to reduce carbon emissions that takes into account Canada’s role as a major oil and gas producing nation.

1. While the global economy continues to use oil and gas, we should ensure that Canada supplies ‘our share’ of the global demand for oil and gas.

There is a debate about how long the world will continue to use oil and gas.  Some say 20 years (virtually impossible), some say 30-40 years (maybe) and others say more.  Regardless, Canada should supply our share of the demand.  We should be part of a global plan to reduce fossil fuel-based energy but there isn’t much benefit to Canada unilaterally reducing its supply if other jurisdictions boost their supply to account for our decline.  There are four Canadian provinces that are major suppliers – AB, BC, NL and SK.  These provinces should continue to unapologetically supply global demand even as they reduce the carbon-intensity of extraction.

In fact, I would suggest that Canadian natural gas could be an important source of energy during the transition.  India, China and other countries continue to build coal-fired electricity plants and are planning to do so for at least another 20 years. Assuming these plants have a 30-40 year lifespan, that keeps the dirtiest form of electricity production in the global energy mix well beyond mid-century.  While not use Canadian natural gas to eliminate coal-fired generation around the world?  This is the argument British Columbia is using to support the large LNG export facility.  It will supply global natural gas demand for at least 30-40 years using gas extracted from British Columbia and Alberta.

I would suggest that natural gas in the Maritime provinces could help Germany and other countries in Europe hasten their reduction of coal-fired generation but oil and gas development needs public support and right now there isn’t much in this region.

In the same vein, I think the potentially resurgent nuclear energy industry could be an important part of the solution.  The new technologies coming to market are easier to deploy and can be better scaled to demand.

2. We need to be serious about the economic transition for oil and gas producing provinces.

Even though we are looking at a multi-decade transition, it will be hard to replace the economic value generated by oil and gas producing provinces.  Calgary is a globally recognized centre of excellence in oil and gas related professional and financial services. How does that strategically important centre – over 40-50 years – evolve that expertise into other areas?

There are well over a million jobs in Canada reliant on the oil and gas industry.  This doesn’t include the jobs created by spending billions in oil royalties each year.  We can’t be cavalier about this.  Remember Asbestos.

As an aside: Maybe Norway should take half of that trillion dollars and give it to oil producing countries as part of a longer term coordinated plan to reduce supply.  I suspect that Norwegians would find that outrageous but why should other countries pay for one country’s profligacy?  Carbon is carbon.  If you carved up all the carbon in the atmosphere by country, on a per capita basis, Norway would be at or near the top.  Why does it get to benefit just because they extracted their oil and gas quicker than others? Is this such a crazy idea?  The Norwegians would say that they should not be penalized because they saved oil and gas royalty revenue while other countries squandered theirs.

The PM is calling for net zero carbon emissions by 2050 (although with the billions in trees he will be planting, I’m not sure how ‘net’ gets defined). If he is serious about this, the plan to reduce emissions should be paired with a plan for serious economic transition in the four oil and gas producing provinces.

3. We need to focus more efforts on reducing demand.

It is easy for most Canadians (again remember the skin in the game problem) to fight against the supply of oil and gas – fighting pipelines, extraction, etc. – i.e. efforts to reduce the supply of oil and gas.  It is much harder to for Canadians to reduce their demand for oil and gas.  The former costs them an occasional tweet or like on Facebook.  The latter costs them in the pocketbook.  The problem, as discussed above, is that reducing Canada’s supply of oil and gas will do nothing to reduce global demand (and, thus, emissions) while reducing our demand for oil and gas is a very tangible way to reduce our global footprint.  This can include eliminating coal-fired electricity generation, electrification of the transportation system (assuming greener electricity generation is also in place), energy efficiency, and other efforts.

Part of this discussion relates to long term planning.  I have talked to folks involved with two natural gas distribution companies that are currently laying new pipe in the ground with a payback period of 30 years or more (in other words, they are amortizing the cost of the pipe over 30 or more years).  New Brunswick gave its natural gas distribution firm a 25 year + 25 year extension (assuming it meets its obligations)  – that is basically sanctioning a 50 year cycle for natural gas distribution in New Brunswick which gets us to at least 2070.  We need to have an honest discussion about this.  Any plan to eliminate fossil fuels from our energy mix by even 2060 or later will require planning to start now.

4.  We should continue to work hard with other countries on a global response

The argument that people make is that Canada is a bit player when it comes to global emissions.  This is true.  All the more reason to be part of a global response.  Greta wants us to listen to the scientists.  Throw a few economists and public policy experts in the room and I agree.  How do we globally respond?  What incentives could be put in place to reduce global demand (or supply for that matter)?  If more natural gas in the short term would reduce the demand for coal but the economics favour coal, what could be done globally to respond?

Should we link global trade to country-specific carbon reduction plans?  How do we ensure that the poorest countries aren’t hit the hardest?

5. Above all, remember we’re all in this together.

Preston Manning is worried that the current fight over our response to climate change will lead to another round of western alienation. If New Brunswickers, the Québécois, Ontarioians, and other Canadians put themselves in the shoes of Newfoundlanders, Albertans and Saskatchewanians (?), it would help.

Canadians produce oil and gas.  Not just Albertans or British Columbians. We all do – and we all benefit directly or indirectly from the industry.

Images from my recent trip to Alberta reveal just how oil and gas is woven into the fabric of Alberta’s economy and culture. 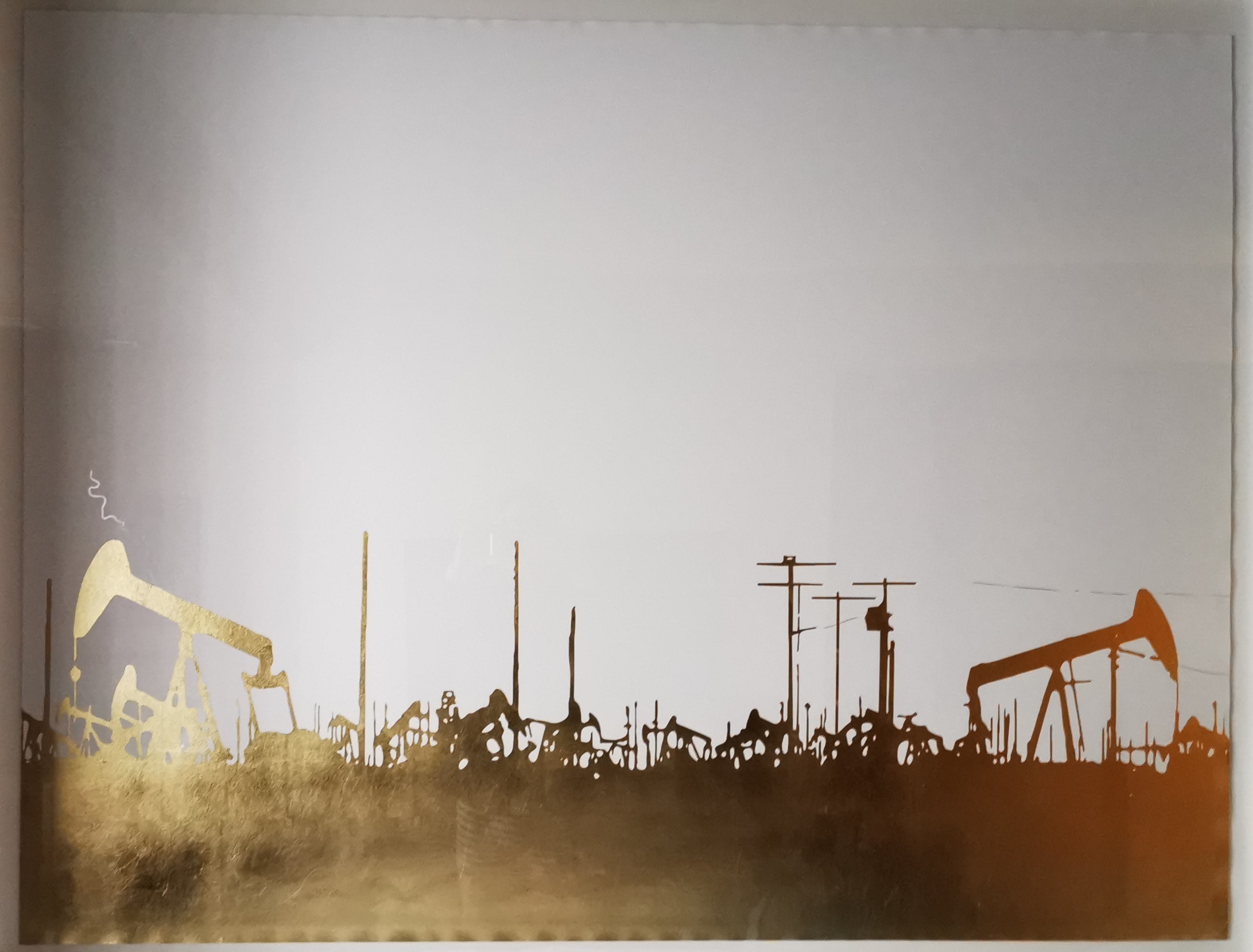 Hanging on the wall in my hotel room in Edmonton.

As seen in a display at the Alberta Royal Museum in Edmonton. 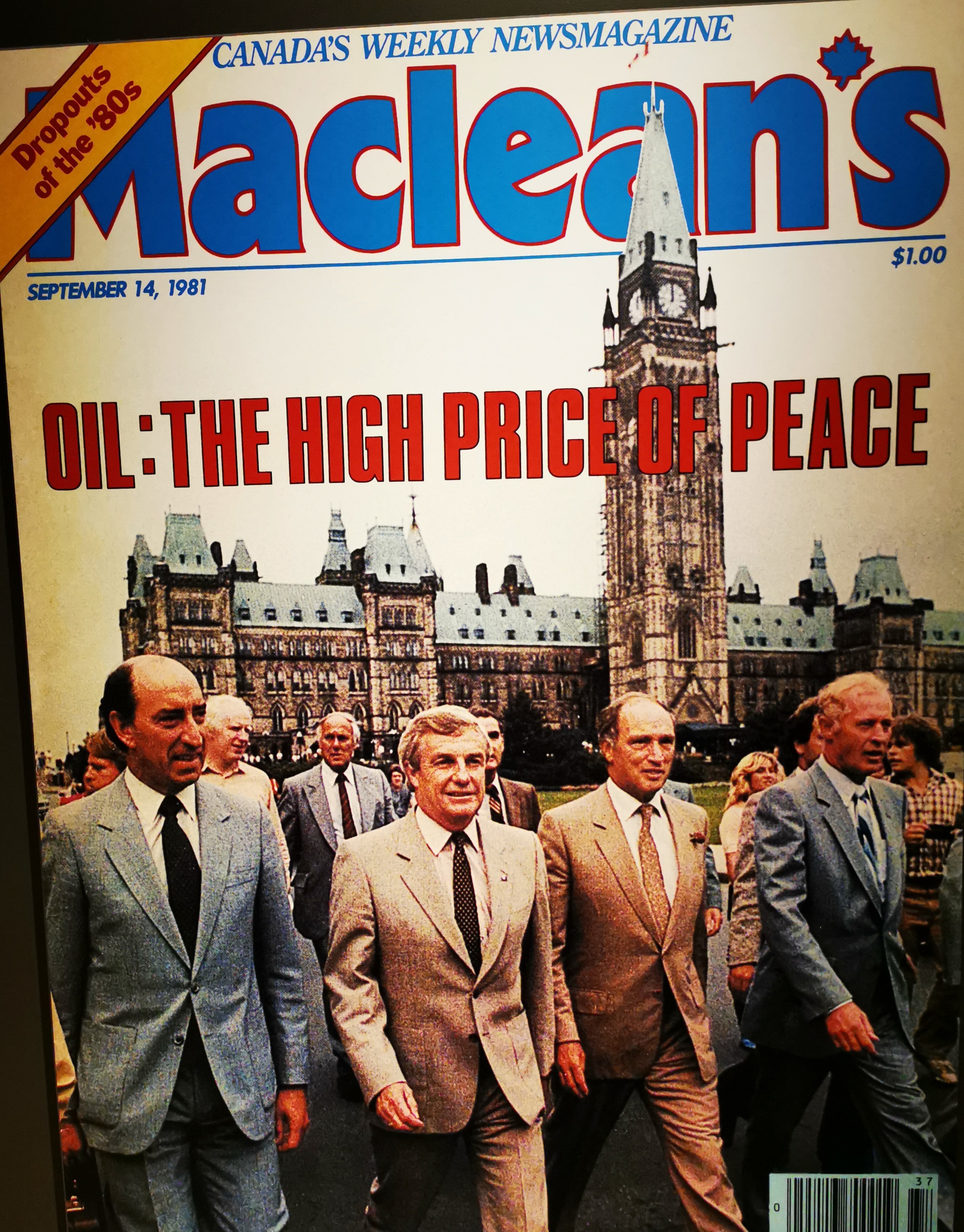 A whole room at the Glenbow Museum in Calgary dedicated to the late 1970s/early 1980s oil fight between Ottawa and Alberta.

Looking out 40-50 years what industries might replace oil and gas?  This isn’t easy.  There are not many industries around that generate very high salaries, massive royalty revenues, and very long supply chains.

Could it be tourism?  Arguably, William Van Horne (Minister’s Island) was the founder of Alberta’s now thriving tourism industry. It is hard to see how tourism could replace oil and gas. 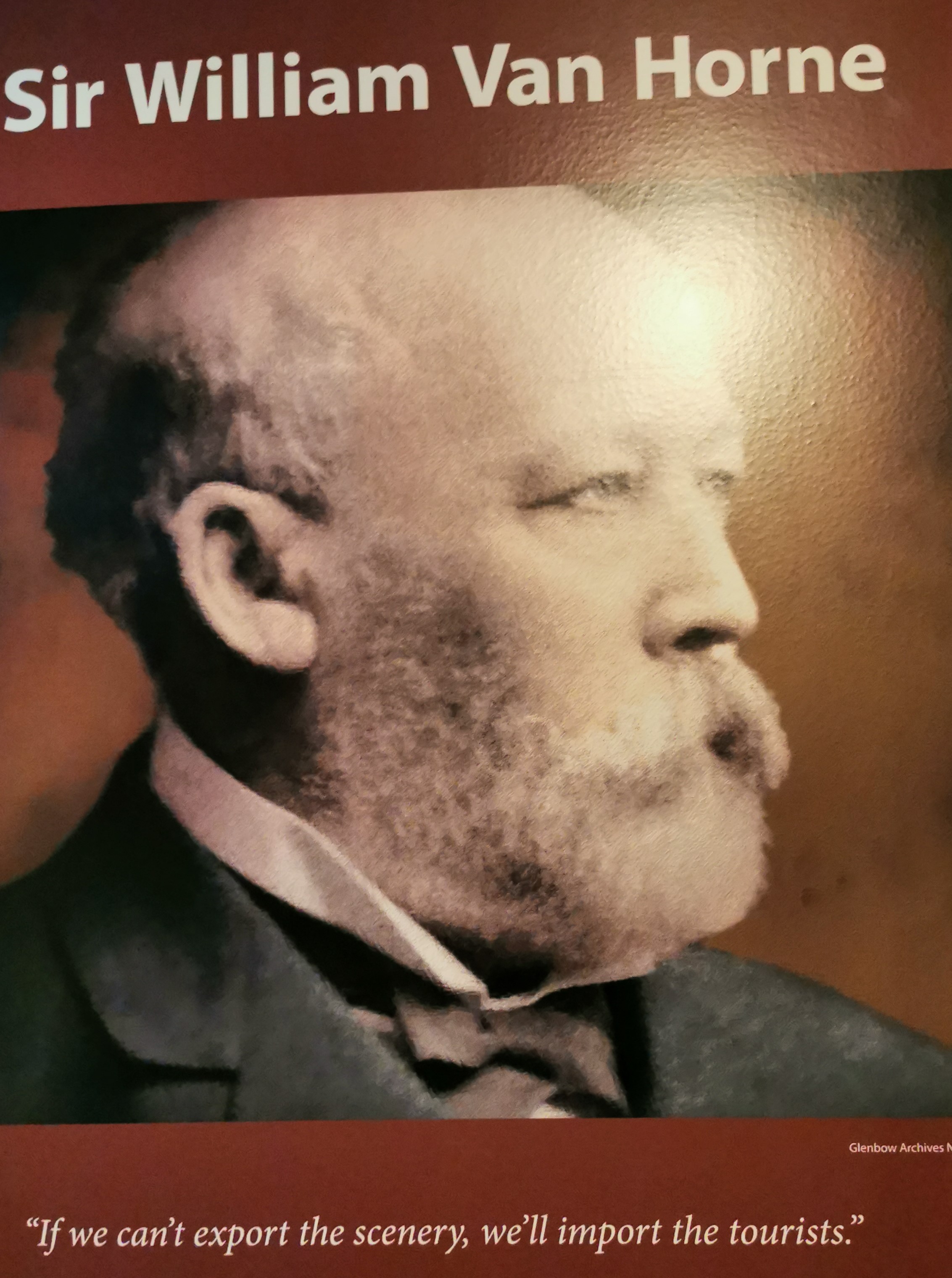 How about agriculture?  Again to help the new railway industry, Alberta was sold to immigrants as a place to set up farms. Could a boost in agriculture replace oil and gas? It is unlikely. 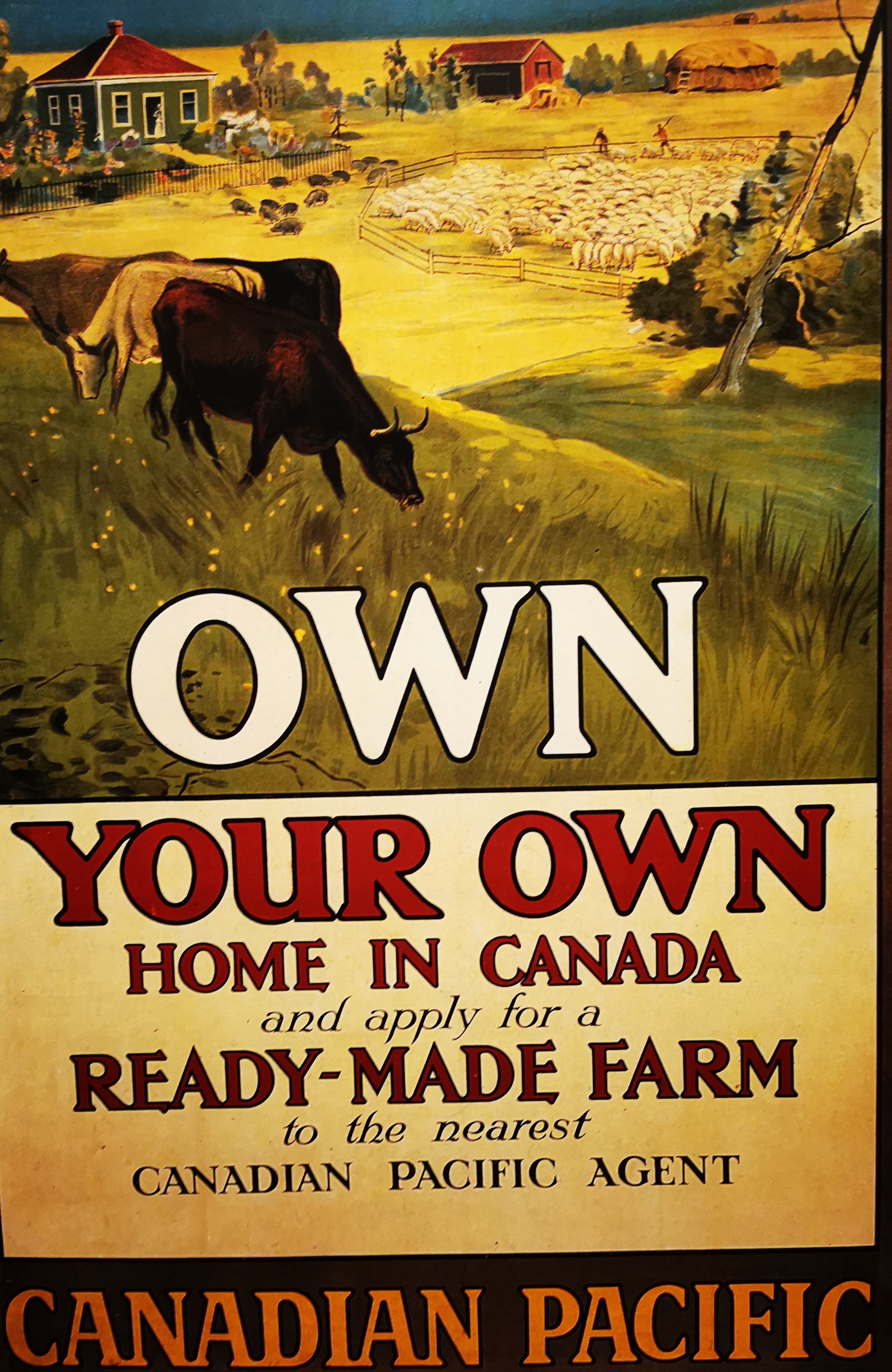 Alberta is a province known for its booms.  It is hard to imagine how a province could grow its population five-fold in a 10 year period.