A lot of people ask me if we are losing even more young people to outward migration now than in the past or has the reduction in the unemployment rate led to more staying here?  I also hear that “immigrants just come here and leave”.

I was in Ontario last week and must have met a dozen people or more with roots in New Brunswick (I also got in a heated battle about the difference between New Brunswick blueberries and the high bush variety you get in Ontario but that is a story for another day).

The evidence indicates that inward and outward migration to/from New Brunswick and other provinces has been fairly stable for basically 30 years.  In the 1960s, the average quarterly population lost to outward migration was an estimated 5,900.  By the 1990s that had declined to 3,100 and since then has basically stabilized at around 3,000-3,100 per quarter.  Inward migration was much lower in the 1960s, was actually higher in the 1970s and has remained a little lower since the 1980s.  Between 2015 and Q1 2019, there were 106 outward migrants for every 100 inward migrants to New Brunswick.

Certainly more work could be done to determine who is coming and leaving (young, old, immigrant migration within Canada, etc.). Certainly the demographic shift is playing a role –  but for those of you expecting a significant increase in outward migration to other provinces as we attract more immigrants – so far that hasn’t been the case. 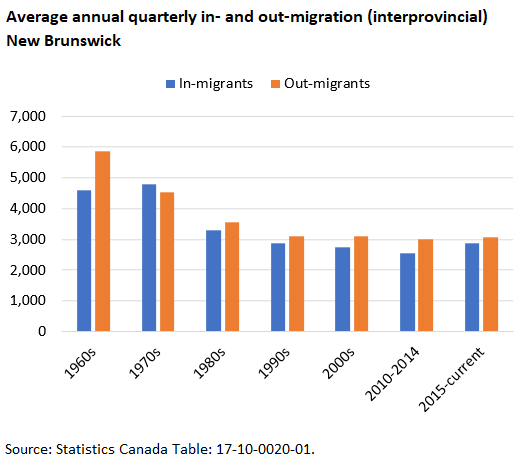