This demographic dividend provided a wave of workers that entrepreneurs engaged to create and expand businesses in a wide variety of industries.  In fact, as is well known, we had too many young people entering the workforce and some felt compelled to migrate elsewhere in Canada. 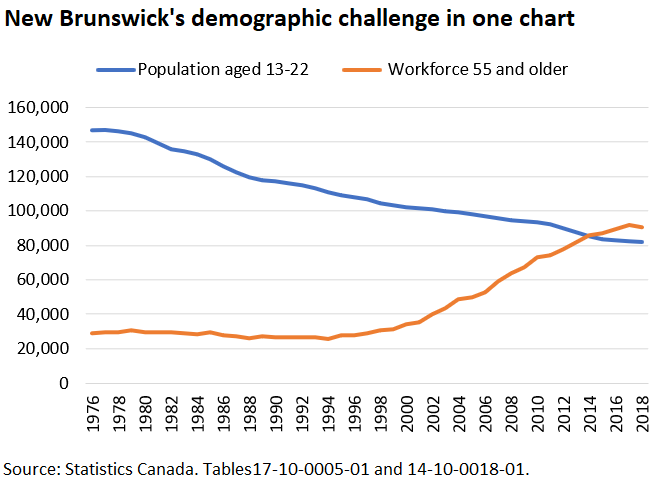 To put it another way, the population aged 13-22 has declined by more than 22,000 in the past 20 years while the workforce aged 55 and older has increased by over 59,000.  Accounting for migration and other factors, the local talent pipeline is and will be thousands short every year.  In other words, there are not nearly enough young people joining the workforce to replace those leaving it.

Take a look at the following chart.  All net growth in the national workforce has come from immigration.  Between 2012 and 2018, there were 893,000 immigrants added to the workforce across the country while the number born in Canada (net) declined.  The number also declined in New Brunswick over the same period but we did not attract even enough immigrants (and others) into the workforce to break even let alone grow as was the case across the country.

What is to be done?  This is probably the most significant public policy challenge of our time.

One of the simplest and obvious answers is to grow the young talent pipeline.  If there are 22,000 fewer in the pipeline now compared to 20 years ago, why not build it back up?

Which brings me to Kamloops, British Columbia.

I’ve been to Kamloops a couple of times over the years. It’s located about a two hours’ drive northwest of Kelowna and 3.5 hours west of Vancouver.  It’s a nice but fairly sleepy city in the BC interior.  The urban population is 112,000 which is only about 2.3 percent of the provincial population.  In comparative terms it would similar in size to Campbellton in New Brunswick.

Despite its relative isolation and size, in the third quarter of 2018 Kamloops had the distinction of having the most international students per 10,000 population of any urban centre in Canada.  According to data published by Immigration, Refugees and Citizenship Canada there were more than 5,000 international students (study permit holders) who were intending to study in Kamloops in 2018-2019.

Traditionally it was the largest urban centres that benefitted mostly from international students.  Now it is Kamloops.  Welcome to 2019.

It’s a pretty simple strategy, if you think about it.  We lost 22,000 young people aged 13-22 over the past 20 years.  Could we dramatically boost that population again by attracting international students?

There is no downside to attracting international students.  Our colleges and universities boost their student enrollment generating significant economic benefits through new job creation, GDP and tax revenue.   The international students get a Canadian education and a possible job in Canada after graduation.  If they can’t find one they go elsewhere in Canada or they go back to their home country.

The provincial government is encouraging the attraction of international students.  In fact, we attract hundreds per year into our high school system through Atlantic Education International.  We should do more to encourage those kids to stay, study at PSE here and join the workforce.

The last point I will make on this relates to competitiveness.  I recently had the opportunity to interview more than a dozen local managers of multinational firms with operations in Saint John and Moncton. These firms operate back offices, IT centres and related facilities here.  All of them were happy to hire immigrants.  But they didn’t understand why they are told they have to go recruit them in the Philippines or Brazil or Romania when they can hire immigrants off the street in Winnipeg, Toronto and Vancouver (exact quote from one and a paraphrase of the others).  To be more specific, none of these firms did international recruiting (with the exception of very specialized staff) in their facilities elsewhere in Canada even though those facilities had 25 to 50 percent and higher rates of immigrants in their workforce.

If we had thousands more international students in our PSE – college and university – and if they were studying courses that were relevant to New Brunswick labour market needs – it would help level the playing field in New Brunswick compared to the larger urban centres.

Because, as I have been told on several occasions, for many firms it is now easier to find workers in Toronto than here.  This is a huge issue for our competitiveness.

So get out there PSE sector and hustle. Tweak your programming to ensure you are graduating folks for the jobs available now.  University and college tuition for international students is more than double and can be triple or more in Ontario compared to here. There is no good reason why we couldn’t double our total enrollment to 12,000 or more within a few years.