I know this is going to sound like sour grapes, but so be it.

MacLean’s magazine is out with its list of the 2019 best communities to live in Canada.   Almost all the best places to live are in southern Ontario and British Columbia.  Atlantic Canadian communities hardly register with Halifax ranking 131st (the highest among all Atlantic Canada communities) and Moncton a lowly 312th.  Rothesay came in at a robust 141st.  Fredericton, aghast, 244th.

They claim Atlantic Canadian cities rank so low because of high unemployment and low incomes, among other factors.

If this was a study done by academics, one would probably think there might be something wrong with the methodology.  If you have results that maybe don’t make a lot of sense, maybe you have the wrong variables or maybe the wrong weighting on the variables, or whatever.  Imagine if you did a study that ranked the best hockey players and put Connor McDavid at 131st.  Instead of gleefully announcing your great results, you might want to take a second look – maybe McDavid was injured when you crunched your data or maybe something else was going on that the 131st ranking should have raised an eyebrow or two.

I’m not saying there are not lessons to be learned here.  I would suggest Atlantic Canadian cities look at the ranking and see if there can be improvements but if we want to know truly where are the best places to live there are a few other questions that might be thrown in the mix such as:

Unemployment situation adjusted for the impact of EI, most of the Atlantic Canadian communities in this list are at or near full employment if you factor out EI and structural issues.

Cost of living adjusted income – Atlantic Canada is still lower but would come out much better.  Look at the following chart.  In Fredericton only a little over 10% of households spend 30% or more of annual income on shelter costs – almost 40% less than the #1 city to live in Canada.  Doesn’t that count for something? 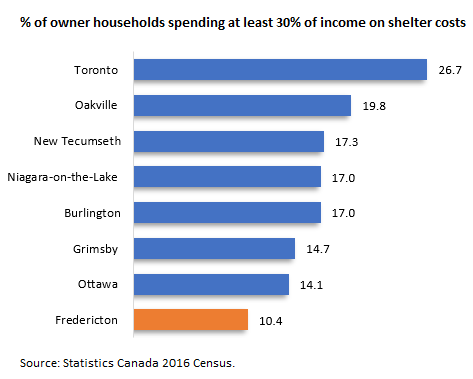 Access of after hour health clinics as opposed to just the doctor metric.

According to Statistics Canada , more people moved to Moncton in 2016/2017 from Ontario than vice versa.  Of the 45 urban centres in Ontario, Halifax had a positive migration rate with 26 and a negative rate with only 14.  Why would anyone want to move from paradise to the 131st best city to live in Canada?  More people moved to Halifax from Oshawa, Hamilton, London, Barrie, Brantford, Waterloo and 20 other Ontario urban centres – than vice versa.

How about adding that to the mix?

My real concern here is that these superficial comparisons are likely going to take on more significance as more immigrants look at places like Halifax or Moncton or Saint John.  They will go online and read that Russel, Ontario ranks 123 spots higher than Halifax.

The truth is I do a lot of work these days in Ontario and there are many great places to live.

But maybe a little more thinking is needed.