A few months ago I had the opportunity to interview the general managers of multiple national and multinational firms with operations in New Brunswick.  Many of them told me they would be very happy to hire immigrants to grow their New Brunswick operations.  But they also said they hire a lot of immigrants elsewhere in Canada – but they hire them right of the street (in Toronto, Montreal, Vancouver, etc.), so why should they have to recruit internationally for their Moncton or Saint John operations when they don’t have to in the biggest urban centres?  If this is the case, I was told by several, they might as well just expand elsewhere in Canada.

Consider the following chart.  In 1976 there were 146,930 people aged 13 to 22 living in New Brunswick.  This is a good proxy for the number of people who would be joining the workforce over the next decade.  That same year there were 32,100 active in the provincial workforce over the age of 55.  These folks represent those that are likely going to retire in the next 10 years or so.  In other words, there were 458 young people who would mostly be entering the workforce for every 100 that would most likely leave it.

Now there are 106,600 heading towards retirement in the next decade or so and only 82,000 young people potentially entering the workforce.

In other words we don’t even have enough young people to replace those leaving the workforce let alone provide the talent for industries to grow. 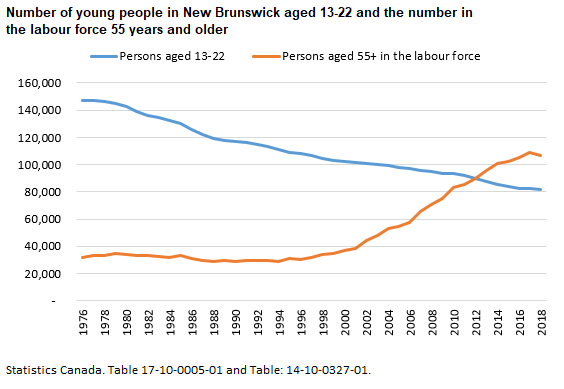 So what do we do?  We are bringing in more immigrants and that is great – but we have the problem discussed above and the fact that the process is onerous for smaller businesses.

If we don’t have enough young people in school to replace those leaving the workforce and to provide enough workers to expand industries – light bulb moment – why not increase in the number of young people in school?  Almost all firms would hire immigrants already here and if they are getting Canadian education experience, bolstering their language skills and getting used to our winter, so much the better.

Now the number has been increasing in recent years, mostly at the college level, but we still have among the fewest international students in our schools, adjusted for population size, among the 10 provinces. 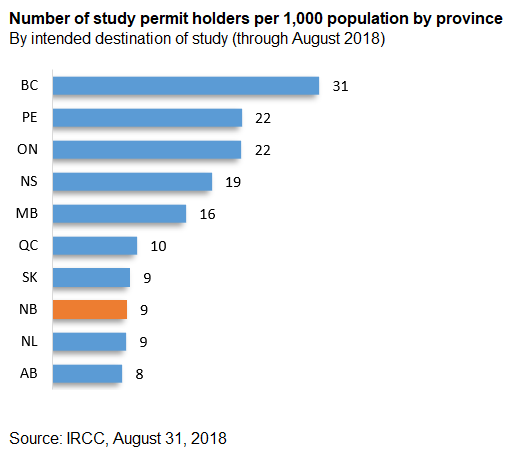 Just to get back to a one-to-one ratio of young people to those leaving the workforce in the near future (as defined above), we would need to boost the population 13-22 by around 25,000.  Why not bring them in as international students?  Why not encourage them to study courses that provide skills that are in demand and will be in demand in the very near future?

The old education paradigm was pretty simple.  Government heavily subsidizes post-secondary education and we clunkily try to graduate just enough to meet the demand of the workforce – although this is more true at the college level.

In the new education paradigm, we attract substantially more international students, train them in areas where there is demand and not be as worried about the supply-demand balance.  In the worst case, some of the students leave after graduation but we benefited from the spending while they were here.  In the best case, entrepreneurs are able to leverage this new talent pool and expand and grow in New Brunswick.

So what’s the problem?

I fear this issue is another edition of something I have identified many times before.

We used to poke fun at the provincial slogan “Be…. in this place” but at least it was aspirational.

Now, our real slogan seems to be “why would anyone want to….  …. in New Brunswick?”

We have a collective self-esteem problem in New Brunswick. I have heard from the public and leaders around the province on many occasions:

Why would anyone want to expand their business in New Brunswick? We will have to give them a big subsidy and they will leave once the money runs out.

Why would anyone want to move to New Brunswick?  We can’t even keep our own young people.  They will come here and then just leave.

Why would anyone want to visit New Brunswick? To see a couple of old lighthouses and oversized symbols of our inferiority complex (i.e. world’s largest axe or lobster)?

Now I am hearing “Why would anyone want to move here to study in New Brunswick?”

It’s time to have a little bit more self-confidence.  Lots of national and international firms have moved here and love it.  Thousands and thousands of people move here every year and most of them love it.  We attract hundreds of thousands of tourists and, I assume, most of them enjoy it because they keep coming back.

Why come to New Brunswick to study?

Finally, I will point to our neighbours in PEI.  Charlottetown has the fourth highest number of international students per capita in the country among urban centres (Kamloops, surprisingly, has the most).

If PEI can do it, so can New Brunswick.  Let’s dramatically increase international PSE enrollment – double or even triple the amount (PEI has 2.5 times as many as New Brunswick adjusted for population size).

Let’s enroll them in programs that are aligned with labour market need – even if we need to develop new programs (e.g. college level finance and insurance diploma).  Let’s send a clear signal to the economy that New Brunswick is serious about ensuring the talent will be here for the future.

1 thought on “Are efforts to attract international students facing the “why would anyone want to….  …. in New Brunswick?” challenge?”