Some one asked me one time to give them some Canadiana.  What is interesting about this place?  I rattled off Tim Horton’s, moose, lobster, canola, the Rockies, etc.  but I also said getting cheques from government.  I had just read somewhere that the government cuts something like six cheques per capita per year to individuals across Canada.   This was a while ago. It was puzzling to me on a practical basis – what an administration process – but the politics of it are juicy.   It’s nice to get that little shot of dopamine every time the government sends you a few hundred dollars.  Even with direct deposit now, we look forward to it, plan what to do with it.

I have been helping my young adult children with their taxes and they get the little jolt of cash from government multiple times per year. HST rebates, my daughter even got a cheque from the Ontario government for something.  The cheques keep coming. Someone was handing out application forms recently in my parents’ church that would give them a little cash uplift.  They filled it out and sure enough a few weeks later, $300 came in the mail.  Families get cash for their kids.  In fact, that money is rolling in these days.  Our PM is practically ecstatic about it: 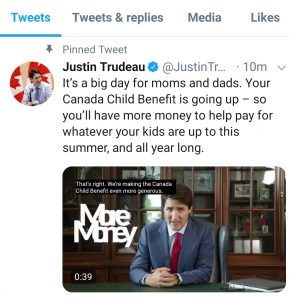 Maybe I am just jealous as  I have long since stopped getting government cheques.  In fact, I have to send the government multiple payments every quarter as a small business – payroll deductions, HST payments, prepaid corporate income tax payments, and usually a bunch of penalties because I filed late or wrong.

The government could easily structure these programs as tax deductions.   You would get the same money.  The only difference is that in most cases you wouldn’t get periodic cheques from your friendly neighbourhood politician reminding you of their munificence.  I know, I know, for the amateur tax policy analysts among you some of these cash transfers go to families that pay no income tax at all.  But lots of countries, including the U.S. have ‘negative’ income tax rates – in other words you would get a cheque once after filling out your taxes each year.

In New Brunswick nearly 461,000 people reported getting direct cash payments from government in 2017.  This was substantially more than the number earning employment income (415,000).   And, of course, many New Brunswickers get multiple cheques from government: EI, HST, Child tax credit, etc.

In recent years the number of people getting direct cash from government has risen significantly both because of more retirees (OAS) and more receiving family and child benefits. In New Brunswick the number collecting workers compensation is up 10% even as the number with employment income is down 1% over the decade (2008-2017). 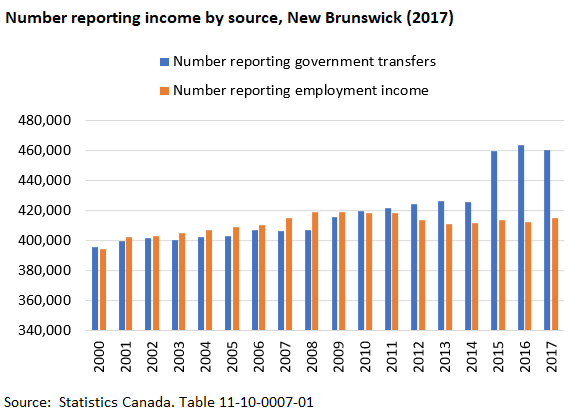 In terms of absolute dollars in 2008 New Brunswickers in total received $0.24 in cash transfers from government for every dollar earned in employment income. By 2017 it was nearly $0.28.  For those of you arguing this is mostly Canada Pension Plan income which is paid into by Canadians, nah.  The CPP represented 29% of total government transfers in 2008 and just over 29% in 2017.

Overall, New Brunswickers received $4.7 billion in direct government transfers in 2017 or nearly $20,000 on average per household across the province.  Even without CPP the amount was $3.3 billion.

This doesn’t include the employment income of the 80,000 or so local, provincial and federal government employees – which at even a modest $50,000/year on average would mean a payroll of $4 billion.  These people, of course, also get cheques from government, but this is different as they are workin’ for a livin’. Still it does add to the stock of government cash flowing directly into households – close to $9 billion per year in New Brunswick.

Don’t expect this to change under any government.  Those periodic cheques from the Prime Minister are a little reminder of the importance of the government to just about every Canadian.  Simplifying things in a way that would see you get the same benefit but without the ongoing stream of payments would make you forget about the important role of government in your life.

Tax reform and lower income support models that don’t require multiple cheques during the year are not on the cards.