One of the most misunderstood statistics out there is the average or median income stats.  People will look at that data and scratch their heads.  How can the median income only be $31,000 and the average income only $39,141 in New Brunswick (Census)?   That makes no sense.  The problem is in the definition.  That statistic includes everyone that earned any kind of income in 2015.  If you look at average employment income for full time, full year workers the median is actually $46,349 and the average is $54,011.

The same holds for household or family income.  The median total income of all Census families in 2015 was $72,354.  A lot of folks look at that and say, hey, my household income is higher than that so I am doing better than most.  But, again, consider the data.  A Census family includes every family – from 19 year olds living on their own to 80+ year old widowers.  If you look at couples with children, the median income in 2015 was $98,521.  By now likely over $100,000/year.  Again, for those families with kids trying to pay for hockey, music lessons, trips, the minivan and, maybe, trying to put a little aside, $100,000 may not be a lot but it is much higher than $72,354. 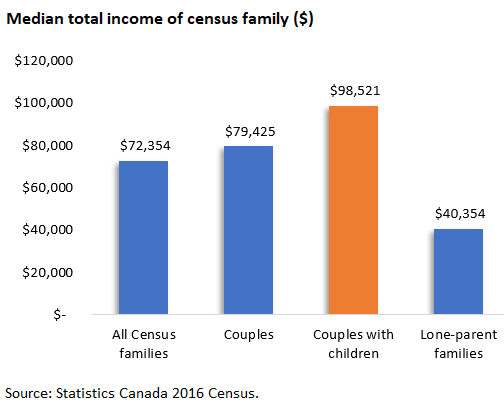 This matters because a lot of government policies revolve around this type of income statistic.  Take the previous government’s free college and university tuition program.  It only kicks in if you have a gross family income of $60,000 or less. I was told the idea was the half the households in New Brunswick would be eligible.

When I pointed out the above statistic, I was met with consternation.  Apparently no one told the politicians that the average household/family income among those with children – at least the couple families – the actual targets for such a program – was closer to $100,000 per year.

Now, I’m not questioning the cut-off (at least not in this post).  But I am questioning the vision that half of your households will be eligible for the free tuition because this is only true if you roll in grampy and grammy, the intransigent bachelors and the spinsters.

Among those couple families with children, only 20% earn less than $60,000 per year (median income). 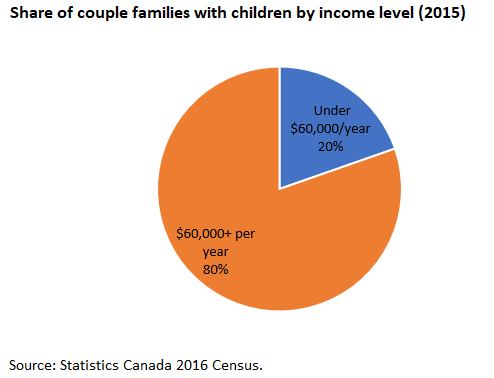 Let’s try and make sure when we are shaping important public policy that we are using the right data.

For example, we are fixated now on making sure we retain immigrants (which we should be, to a point).  We are tracking medicare numbers and trying to figure out how best to determine who is leaving when we have a pretty good data point sitting out that that has been used for decades.  It’s called net interprovincial migration.  Sure it doesn’t separate out immigrants but if we are losing folks – immigrants or locals – what’s the real difference?  In the past two years New Brunswick’s net interprovincial migration (combined) has been positive.  That’s right, more moving in that out on a net basis.

At least for the past couple of years there isn’t the mass exodus predicted by some.

If you want good policy, start with good data.